Dark Souls tried to kill me.

That phrase is how I’d say the joke started, at least. If there were some kind of judicial entity or ethical tribunal created to protect and serve the interests of we the players, it would be the nut of my on-record statement. Surprise: my most adored game from last year is also devious, vicious, cynical, abusive, methodical and highly intelligent. Of course everyone knows that, despite a few niggling concessions made to accessibility, Dark Souls is more or less From Software’s own Hannibal Lecter, designed to test and torture the player, likely until they break under the strain. That was the kind of tired approach I had decided to avoid when coming up with my own evaluation of such a monster. “Prepare to Die,” the ad campaign taunted me, or anyone else who came within grasp of its bloody feasting gauntlets. Obviously this wasn’t an idle threat.

All of us that played Dark Souls were very aware of its intentions. Like its predecessor – in some ways an even harder game – the design speaks for itself. Right off the bat, anyone making critical judgments could just write obvious observations about Dark Souls’ caustic temperament and call it a day. I get that the strains on time, stamina and sanity that a close reading of Dark Souls would demand probably aren’t extremes most people are interested in pushing themselves to, but I was determined to shoot for this anyway. Instead of discussing the game’s difficulty in practical terms, I wanted to reflect on why and how such a soul-crushing experience had merit. Stubbornly, I was determined to swing for the fences even if I had to put myself through hell to get a satisfactory result.

Dark Souls tried to kill me.

I caught some strain of virus on the second night of nearly week-long excursion with Dark Souls. It did a number on my immune system as the days and nights wore on, grinding it down to next to nothing. Eventually the tag-team of bodily infection and editorial ambition became my Orstein and Smough, the hated executioner and dragonslayer duo that causes so much grief and agony for most players late in the game. Like my countless defeats at their hand, I was powerless against the spread of the virus even as my ideas dulled. The result was that ultimately, in my quest to do Dark Souls critical justice, I failed.

At this point I should probably mention that compared to some of the other recent pieces on Unwinnable, I don’t necessarily see the demise of an analytical idea as all that impactful or important, at least outside anything more than a very narrow sphere of influence. Aside from my own selfish motives for seeking some hollow personal redemption, the narrative of death and loss here, such as it is, is cautionary at best. Yet conceivably, admitting defeat isn’t always the worst idea.

Before the condition (which I joked to myself that Dark Souls itself had given me out of spite) had a chance to mature and flourish, though, death was still at the core of my thoughts. I had been mulling over what its increased value meant in the ongoing dialogue you have with the game world, how players’ responses to it shapes their perception and experience, et cetera. My ideas were too vague. I had planned for almost a solid week of long hours gorging myself on the meat of Dark Souls’ bleak realm and whatever horrors awaited me. It wouldn’t have been a problem if I hadn’t been sick. Though marathoning through 10 or 12 hour play sessions day in and day out didn’t necessarily sound like “fun” per se, I’d be lying if at the time I said I wasn’t looking forward to it. When it comes to studying, I’ve always been a little insane about immersing myself in a medium in order to draw what I call (or have made myself believe) is a more “authentic” experience; with games this becomes tantamount to interactive method acting, only instead of limiting yourself to a role, the so-called stage of concentration is open to whatever prominent form of expression the game you’re playing is advising you pay to attention to. This could be anything from the anti-Rand collectivist narrative of BioShock 2 to, say, the seemingly arbitrary aesthetic palette in El Shaddai. With Dark Souls, death and the inherent hopelessness of such an arcane and unforgiving world seemed to be the baseline. (I was so entranced by this idea that I briefly considered a marathon with no outside contact and with as little sleep and food as I could manage, just to see what kind of psychological state this would leave me in. Thankfully even I have my limits, and I came to my senses well before I started down that road.) 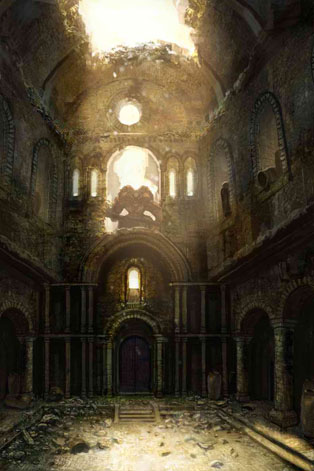 Play enough games for long enough and you may develop a mental callous of sorts toward the passage of time. I expected progress to be slow at the outset with Dark Souls, and it was. In my fledgling first hours my thief attempted the Undead Burg, the only logistical progression after being cryptically instructed to ring two far-flung bells to progress into the game’s latter portion. As expected, the triumph of surviving long enough to find a new bonfire where I could rest was both slow-going and hard-won. I lost count of how many times I scoured the upper half of the burg, systematically murdering the parade of low-level enemies I had quickly memorized. Such it is with Dark Souls.

Making headway into the burg wasn’t easy. I killed the first boss, a Taurus demon, by tricking it into an AI loop; following that the burg’s first black knight and the monstrously armored Havel in the area’s basement repeatedly refuted my attempts at advancement. It was the first of many brick walls I would encounter. At this stage I was still dutifully paying close attention to every instance and method in which I died, every trap, deviously placed enemy or treacherous bit of terrain—anything that would further my ideas on death’s expansive role. It wasn’t helping. I continued to mentally grasp at straws as the hours began to mount.

Then my affliction, whatever it was, reared its ugly head. I ignored the slight, flu-like symptoms initially, assuming I’d be able to kick a weak bug if I jumped on it right away, since that’s usually how these things work. No dice this time. It was the long hours I was devoting to Dark Souls that betrayed me. Aside from eating when I remembered and sleeping only enough to get by without cutting into my rigid gameplay schedule, there was precious little time to idle around while not powering further into the game. My body couldn’t keep up, and once the virus had infiltrated, I could do nothing to halt its progress until it had run its course. Undeterred, I pressed on as best I could under the circumstances.

Dark Souls generally has two primary modes of function. Either you’re inching along uncovering ravaged lands and making new discoveries at an interminable pace or you’re losing a war of attrition against a set obstacle, a boss or enemies that have taken your avatar’s life to the point of extreme frustration. Seemingly working in tandem with the spread of my illness, the protracted millstone of exploration weighed on me. It doesn’t matter that I only remember snippets engaging in either of Dark Souls’ modes from the following 30 or 40 hours: painstakingly killing my way from the sewers to perenially dreary Blighttown, until I eventually reached (and thoroughly explored) the swamp at its basin; desperately trying to run the gauntlet in the catacombs in an attempt to reach the area’s boss with an army of undying skeletons nipping at my heels; periodically returning to previously explored areas to experiment with items or equipment in hopes the inherent Castlevania-esque gameplay systems might reveal some new hidden path or reward; the stress ulcer-inducing Sen’s fortress and the giant iron golem guarding the gate to Anor Londo.

Meanwhile, no matter how many cups of tea, vitamins and over-the-counter drugs I took, my flu symptoms were slowly evolving into something more horrible and tougher to shake. It’s no surprise that I constantly found myself at the passive contradiction between actual excitement in ever so slightly expanding the reach of my “conquered” territory and succumbing to a languid haze of endless bloodletting, land surveying and relentless, inevitable failure. The paradox of paying attention while vacantly experiencing what a game has to offer is its own weird brand of tunnel vision, and the disarray only increases when so drastically under the weather. The more I played, the less any of my ideas made sense. The miserable pounding in my head and pressure in my ears made it hard enough to focus; at some point beyond the 40-hour mark, I had to concede a little and concentrate almost solely on surviving each confrontation. 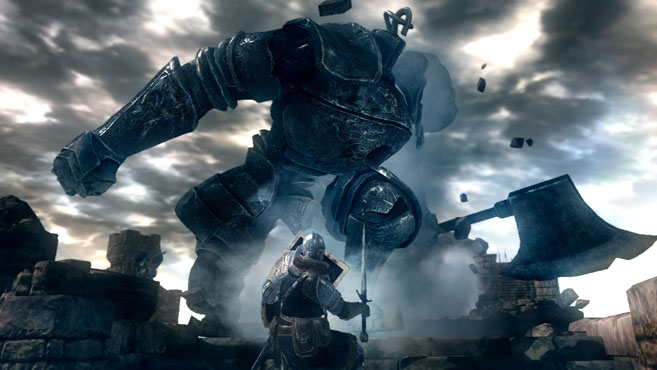 In the final hours leading up to my deadline, I was close to a state of delirium. The flu had lapsed, replaced by a high fever. Getting through Anor Londo had been excruciating – I mostly blame the two dragonbow-toting black knights flanking an outer scaffold of the primary tower, which afforded dodging room of less than three feet – and the less said about Orstein and Smough, the better. When I first began my game, I followed the general advice on Twitter at the time by picking up the massively overpowered Drake sword, something I was still feeling guilty about over 40 hours after I’d decided to stop using it. Since then I had staunchly refused to summon strangers to help with boss battles (another credo I had to reluctantly break to finally vanquish the deplorable executioner and the dragonslayer); in my weakened state I just couldn’t hack it anymore.

Had it not been for a last-ditch effort to get some extra sleep on the final night, maybe I could have gotten past Anor Londo before my deadline. I don’t know. Almost 60 hours in, I figured I might have been able to see a little more of the remaining 15 or 20 that barred my entry from the end of the game. When the hours at last ticked down to minutes I calmly put down the controller, exhausted from the incessant sting of defeat, and retreated to my room to write, no longer having any idea what I was going to say. It was all I could do to string sentences together; I wrote with as much fury as I could muster, leaving the fantasy of Dark Souls’ perpetual goal-extension line behind for the real possibility of sleeping for days. In the eleventh hour I no longer cared about my personal failures in the context of what I had or hadn’t been able to see or ideas that I could or couldn’t get down in a Word document. In the shaking throes of a fever my anxiousness to finish couldn’t be tempered by my future disappointment with the resultant end product.

Whether it was due to illness, by my own editorial hubris or some combination of both, I didn’t have the epiphany I wanted while playing Dark Souls. The unfortunate irony is that all my ideas about the nature of death and, more significantly, the myriad hours I sunk into the game were in pursuit of a realization that never came.