My first experience with a maxi-series was Maximum Clonage, a bloated run of several different books aimed at reinventing Peter Parker and making him more interesting to new and old fans alike. It failed. The Clone Saga set the bar for a series run amok, so why Marvel feels the need to tap into that resource is beyond me. I guess they thought there weren’t enough Spider books on the market.

Scarlet Spider focuses on Kaine, one of the failed Jackal clones created during the whole clone thingy, but now Kaine is on his own and trying to make an identity for himself. More to the point, Chris Yost – known for his work in X-Men and Red Robin – is trying to make the character interesting enough to hold his own in a new series. The problem with Scarlet Spider is that there’s nothing new to keep readers interested, and while Houston is excited to have its own superhero, the city plays a minimal role in what can at best be called an average introductory issue. 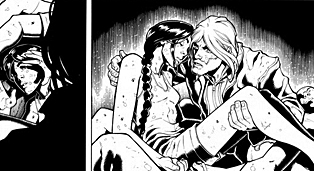 Haunted by his dark past, Kaine hits the road in an attempt to reinvent himself. He ends up in a Houston port, stopping a human trafficking deal in order to get bags of money to help him live a comfortable, anonymous existence. In a scene reminiscent of Batman’s introduction in Batman Begins, Kaine fights off a bunch of bad guys on a dock, using the large docking crates as cover. After beating a bunch of people, he discovers that one crate has a load of burned and decomposing bodies. Save for one. Kaine carries her to a hospital, then takes off. His whole purpose is to avoid getting involved in anyone’s life. He fails to do this when he saves a woman from a speeding vehicle (because it always seems like someone is going to walk in front of a speeding vehicle). The issue ends with some tattooed dude shooting flames from his hands, calling out the girl Kaine saved.

As a character, Kaine has multiple personality disorder. One minute he freely swings through Houston’s skyscrapers, and the next minute he chews out an old woman for walking in front of a car. I quote: “Are you out of your !@#$% mind, old woman? You shouldn’t be wandering out in the !@#$% street. You’re too !@#$% old and too !@#$% slow! What if I hadn’t been there, you’d be !@#$% dead!”

I get the need to play up the anti-hero, but the moment doesn’t make the character any more interesting. It slows the story down and plays on one of the biggest overused hero moments in film and comic history. The best origin stories allow the character to develop organically, and then when the moment of heroism reveals itself, readers feel a sense of catharsis. Superman: The Movie and Batman Begins come to mind. The heroes don’t appear until the one-hour mark. All the moments leading up to that are spent on character development.

While Kaine hasn’t officially revealed himself as the Scarlet Spider yet, the conflict feels rushed. In two pages, he decides to reinvent himself. Whatever happened to the downward spiral? He has to hit the bottom before he can find the top. I wish that Yost had spent the first arc building to Kaine’s heroism. Make him avoid conflict until he realizes he is a hero, and being a hero is what he’s meant to do.

The highlights of the issue occur in the beginning, when Kaine is still running and hiding in the shadows. Stegman and colorist Marte Gracia use a lot of dark images – blacks, blues and reds – and the first few pages have some intense violence. When Kaine shaves his head and his beard (with his hand, mind you), the tone shifts to sunny, open and light. The comic loses its edge, and Scarlet Spider becomes as clichéd as a Thomas Kinkade painting. Chris Yost is better than this. His X-Men work remains some of the best written, and readers know he’s capable of much more. His Red Robin run started off similarly, got better, then got mediocre. I expect the same here. Plus, I’m waiting to see Houston as a character itself. The city barely makes an appearance and serves no specific purpose to the story.

I wanted to like this comic, and I wanted to be excited for the return of the Scarlet Spider. This introductory issue, however, doesn’t give me much hope. 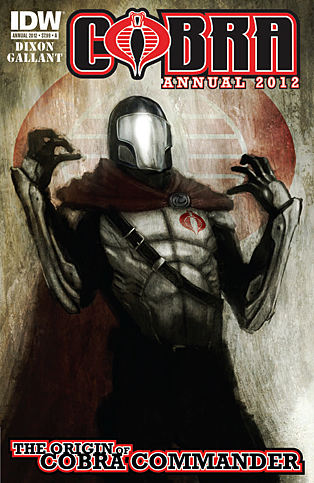 After reading so much about G.I. Joe: Cobra from Unwinnable’s own comic guru Ian Gonzales, I decided to see if it was any good. Annuals may not be a great place to start, but they’re usually longer stories and have a few goodies thrown in. While I’m not completely familiar with the G.I. Joe universe (in the comics anyway), I found Cobra Annual 2012 to be a riveting piece of work with great action, stunning violence and a tightly-wound story about the origins of the new Cobra Commander, a man simply known as Krake.

The comic tells the story of Krake (named by a mercenary who envisions the boy as a mean snake – a Krake), a boy who grows up in the violent world of the opium trade. Literally born during a war, Krake grows up surrounded by violence and when his mother is killed, he turns to a life of crime, utilizing the opium fields around him for monetary success. Much like a gangster story, Cobra Annual follows Krake as he encounters drug lords and mobsters, both of whom hire him to carry out their dirty deeds. Because of his apathetic view of humanity, Krake is the perfect assassin, and eventually he ends up on Cobra’s radar. Because his face is so well known, he seeks out surgery to alter his appearance, and the final pages avoid showing readers his true looks. Instead, he hides behind a mask that most resembles an Imperial stormtrooper and makes for the perfect segue in to the role of the helmet-wearing Cobra Commander. And while the comic doesn’t tie up all loose ends, Krake’s story is to be continued in the pages of Cobra Command.

Because the story focuses so tightly on Krake, I found the issue to be a pretty coherent read. Krake isn’t a clichéd bad guy. While he has the traits necessary to be a great assassin, he’s not driven by anything in particular. Even though he saw his mother murdered, this doesn’t seem to be the driving force behind anything he does. If anything, Krake is driven by an unknown desire. This makes him dangerous, because there’s no one thing he wants, no single thing that would make him satisfied. Much like a sociopath, Krake neither feels emotion nor cares about alliances. The first time he meets the Baroness, he pins her against a wall and tries to choke the life out of her.

Basically, he’s the perfect villain, and Chuck Dixon does a fantastic job building him up throughout the issue. The more I read, the more I found myself engaged with the comic. I’m glad this was an annual because as a new reader, I had much more of an introduction than if I had picked up a random issue. My only other experience with G.I. Joe was the cartoon (and the awesome action figures), but they didn’t have the violence or development that this issue does, so being reintroduced to the G.I. Joe world was also a bonus.

While I haven’t followed any G.I. Joe, this comic has made me a fan, and I may now get into it. I know Chuck Dixon best for his Batman work, but he clearly still knows how to tell a great story, develop his characters and craft some intense action sequences. At a whopping 50 pages (and a $7.99 cover price), Cobra Annual 2012 is worth the buy for both its visuals and its storytelling. 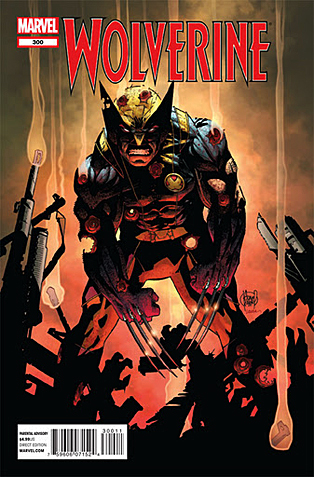 Bannen’s Book of the Week: I wouldn’t call myself a Wolverine fan, because my understanding of the character is tenuous at best. I know he first appeared in The Incredible Hulk #181, and I’m familiar with Weapon X and the way Logan became Wolverine, but I’ve never really invested myself in the character. Like most other comic fans, I know he smokes cigars and says “Bub” a lot. And that he’s been aptly portrayed by Hugh Jackman in the X-Men movies (save for Wolverine). But like other comic fans, when a character reaches a milestone, I want to be there to see it. Most of the major issues I’ve read (like Action Comics #900) have been letdowns, so I was pleased and impressed to see that Wolverine #300 is not only a great issue, but also a great paean to the character. It’s an issue that any fan should be glad to own.

The story brings Wolverine back to Japan and opens with Logan on his flight. He decides to use the bathroom, and that’s when the flight attendant comes around and hands out swords. The rest of the issue is similar: full of fun violence, great dialogue, and a fantastic setup for the future of the series. There’s a new Silver Samurai and he’s hooked up with Logan’s daughter. But more than that, The Hand – a group of mystical ninjas – has returned. They’re tied up in the Silver Samurai’s plan, as is Logan and even Mystique. I don’t understand all of it, but I enjoyed the hell out of it.

Sabretooth makes an appearance (while eating a dead water buffalo). He makes for some fun and violent banter, as does Wolverine’s former flame, Yukio, and her daughter Amiko (Wolverine’s surrogate daughter). Kubert and Mounts, as well as Garney and Keith, do a great job of illustrating the issue. Sanders and SotoColor’s art feels a bit too clean for this comic. Their sections feel out of place with the others, which have a grittier texture and more erratic pencils.

The issue is really a setup for a greater story. I applaud Jason Aaron and Marvel for making this a pertinent part of the continuity and not a cheap capitalization on a very popular character. There are no throwaway stories, no flashy Mylar packaging and no special covers. There’s only Wolverine and the violent world in which he lives. Everything people love about Wolverine is on display in this comic, and the artists bring the panels to life with their fantastic pencils and stunning colors.

What this issue proves is that Wolverine is as interesting as ever and has enough talent around him to keep him alive for a long time to come. Jason Aaron does a fantastic job of giving readers the most important facets of the character. I haven’t read many other authors who get Wolverine and who make him accessible to newer readers. With talent like this, it’s no wonder Wolverine has captivated so many people and become such a popular character in the comic world.

Paratext: An Infinity of Lists