I’m going to say this, and I need people to stick with me: Kids ruin everything. I’m not talking about having children – I think children are great; I’m not a father, so I live vicariously through friends of mine who are parents. While kids always add an element of humanity to stories, they usually do so to stories that could do without it. Think Phantom Menace – Jake Lloyd is awful! More recently, I tried to watch Terra Nova, but the baby daughter (whom they smuggled in a backpack) killed the show for me.

And I’m afraid The Punisher is next.

Greg Rucka’s previous Punisher issues have everything people love about Frank Castle – he’s violent, angry and pretty badass. More recently, he fought the new Vulture and fell about 50 feet to the ground, smashing his right leg and splintering his body with broken glass. Frank left and has since been rehabilitating, growing a pretty sick beard and sporting a patch over his left eye.

Now, he has a friend. Some young kid has taken a liking to Frank and in the end brings him some Thanksgiving dinner. The kid runs away, though, when he discovers that Frank is the Punisher. Suddenly, the mysterious bearded man – who spent his days shooting holes into targets nailed to the wooden walls – isn’t the hero the kid thought him to be.

The issue also follows the two detectives assigned to the murder that occurred in the first issue, and that part has been intriguing as hell! The Morgan Freeman-like Oscar Clemons and his partner, the Brad Pitt-like Walter Bolt, are trying to solve the mystery, but Clemons has his own motive: He’s trying to track Frank down rather than find out who killed 29 people at the wedding of a fellow police officer.

The woman who survived this, Rachel Cole, is working on revenge of her own. In the past few issues, she’s grown colder and colder. Truly, we’re seeing the descent of a hero into madness. And since Frank is meant to be the true anti-hero of this series, seeing him have fun interactions with kids takes away from how tough he’s supposed to be. If he’s a badass, but Rucka removes the bad, then he’s just an ass. Rachel Cole is a way cooler character.

Punisher isn’t a bad series. I still like it, but partially because I remember what it was. This issue has all the tones of a rebirth for the character: It takes place in winter, Frank’s still healing and the people around him are all being moved into place, much like chess pieces.

But in the end, Frank Castle is still Frank Castle. And no matter how many times Rucka tries to humanize him, the Punisher works better as a killing machine. This arc will come to an end soon, so I’m hanging on, hoping for more of what made the series so engaging to begin with. But if Frank doesn’t get out of his rut soon and start killing people, I’ll have to find violence somewhere else.

Ditch the kid, Frank. He’s only bringing you down. 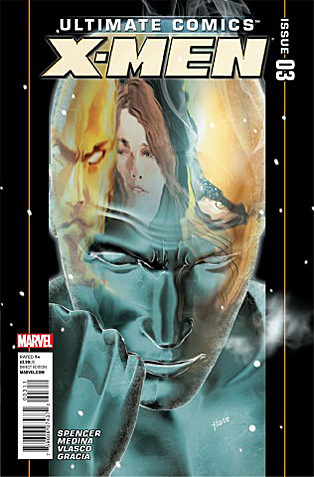 Nick Spencer is quickly becoming one of the best writers in comic bookdom. Not only is Morning Glories the hottest thing since bubble gum, but his work in the Ultimate Universe is engaging and detailed, thriller-like in its presentation and damn scary at the same time. While this issue has less to do with the X-Men, it introduces a new version of a character to the Ultimate Universe: William Stryker. But Spencer’s version of Stryker is terrifying, not because he’s a truly intimidating character, but because he’s insane.

And he’s going to bring ruin to everything.

The cover of the issue is a bit misleading, as much of it focuses on the X-Men supporting cast. It opens with Valerie Cooper meeting with the president to discuss Pietro Lensherr’s plan to aid the U.S. government. Through much posturing and pseudo-Shakespearian language, Pietro offers his secret weapon: Cerebro.

Next we’re introduced to Stryker who, in this universe, dresses like a Sentinel. Spencer shows the current carnage in cities like New York and Washington, then we’re taken back to the X-Men, who are currently crawling through the Morlock tunnels in an attempt to meet back up with Logan’s son. When they do, he explains how he escaped with the help of a kid and his brother Joshua, a worm-type creature who happens to be attached to the boy’s body.

At the end of the issue, Stryker is seen in the ruins of New York, speaking of Babylon and its sins. His final words, “Now heed the word of the Lord,” are enough to send chills down readers’ spines. Not because they’re biblical, but because it’s clear that Styker is crazy.

I love Paco Medina’s art, and the man knows how to draw the X-Men. Juan Vlasco and Marte Gracia add some spectacular inks and colors, giving the issue a lustrous glow and clean, spartan visuals. It’s a beautiful comic to look at.

While we’re not given much in terms of the X-Men, we are given more setup and people placement. Much of this issue feels like it’s building to something. It bounces between past and present and from character to character, but just enough so that the story never feels settled. The final pages, with their coloring and illustrations, make for a scary cliff-hanger.

I love this series, and issue #3 is another reason why. It has strong storytelling and beautiful art. Like Spencer’s other work, this feels epic in scope and carefully calculated in its presentation. 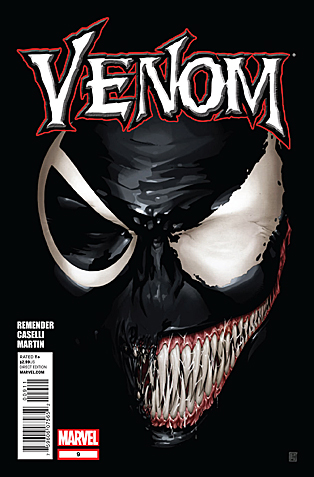 Bannen’s Book of the Week: I almost dropped this series during “Spider-Island.” It had started out strong but quickly devolved into the usual hero/anti-hero storyline with Flash trying to control the symbiote while the symbiote tried to control him. This seemed too familiar to add anything new to the comic world.

This issue, however, sees a return to normal and a better scope of what Rick Remender has been getting to all along. Venom is an unstoppable force, and no one – not even war hero Flash Thompson – can control it. Much like watching Banner “Hulk out,” readers finally get to see Flash go nuts – with spectacular results.

The beginning of this issue reads much like an apology note the morning after a hard night of drinking. Remender moves quickly to wrap up the leftovers of “Spider-Island.” This epilogue, as opposed to Slott’s, only takes two pages before it moves on. Remender resorts to a quasi-MacGuffin when he introduces readers to an actor who has gone to New York to try to make it big. We get a quick backstory (which occurs in a few panels on one page), then he’s run over by a tank.

The moment occurs so quickly, almost enigmatically, that I wasn’t sure what had happened. See, some guy has built an unstoppable tank, and in the aftermath of “Spider-Island,” he uses all the carnage to go on a robbing spree. Rolling the tank into banks, he blasts open the vault doors and steals as much as he can. The poor bastard who meets his maker under the steel treads of the tank starts the plot, but serves no other purpose. I only knew he had died when Venom made a stink about it. Save for this one flaw, the rest of the issue seems devoted to showing how Flash will go crazy and be consumed by the alien host.

When the robber rolls over a mother and daughter, turning them into human bean juice on a Manhattan road, Flash goes nuts. Caselli illustrates the change well, first creating a few errant lines of costume, then allowing it to consume Flash, giving readers one final shot of his face and an eye filled with rage. Then Venom takes over.

When the villain makes it home, he finds another prize besides his money. Having clung to the tank, Venom appears and slashes, breaks and tears off parts of the robber. Then he makes him beg for his life. Mercifully, he tears his head off and spits it out. At the end of the issue, Flash is back to his old self, lying to Betty about his actions during the “Spider-Island” event.

What really sold me on the issue was Remender’s buildup. Eddie Brock had a conscience that even the symbiote couldn’t break, but Eddie always held back (he even became some sort of hero for a while.) Flash, however, is a soldier. He has a simple black and white conscience about him; bad people should be punished, good people should be saved. This makes for an interesting dynamic. I wanted Flash to hurt the guy who steamrolled over the mother and son, and while I could see the end coming, Flash’s actions still shocked me.

I think this comic is in for darker days ahead. Look at the cover!! This issue may be the beginning of the end for Flash Thompson, and I encourage readers to get a hold of the upcoming issues as Remender, who is now one of Marvel’s hot writers (see Uncanny X-Force), seems to have a knack for turning old series into great series.

Venom is no different. It feels different this time; it’s not so much trying to reintroduce character and stay within the confines of event stories. Instead, Venom feels looser and freer.

Brian Bannen used to hang around with kids while wearing a symbiote costume. Don’t ask him about it on Twitter @Oaser.

A Digest to Digest To – Thanksgiving 2011