Here’s my shameless celebrity connection: My cousin Mike grew up with Joe Madureira, and they remained good friends for many years. I remember once seeing an Excalibur page mockup and being awed by the art. But I didn’t really see much of Mad’s work until years later when he illustrated Ultimates 3. In that series, however, I found the character designs to be a bit blocky, and the colors gave the comic a muted, chalky look. So I approached Avenging Spider-Man with the mindset that I probably wouldn’t like the look of it.

I was wrong. And I hope Joe Mad can forgive me.

Avenging Spider-Man has a look that’s similar to Leinil Yu’s work on Bendis’ New Avengers. But where Yu’s pencils were initially overpowering (and eventually pared down for Secret Invasion), Mad’s pencil work is very clean. In a few instances, I could see the original lines. Maybe the decision to keep these was made by Ferran Daniel (who puts some great color into the pages) or editor Stephen Wacker, but either way, it makes for a great-looking comic.

As for the story? Few Spider-Man comics are this FUN! The purpose behind Avenging Spider-Man is to tell team-up stories where Spidey hooks up with one of the Avengers and the two kick some ass. This story deals with an army of mole people attacking New York City, and Spider-Man teams up with the Red Hulk (aka General Thaddeus “Thunderbolt” Ross) to take them down. The story does have a cliffhanger, and I’m anxious to see the resolution.

Avenging Spider-Man is also non-canonical, so anything that occurs will not directly affect the 616 universe. By allowing the story to be a stand-alone, Zeb Wells has more freedom in what he does. No major decisions will be made, and each team-up will have no lasting effect on Spider-Man or his connections to the Avengers.

The issue has a buoyant, lighthearted feel to it. This must be the result of Zeb Wells not being chained to the Spider-Verse, because besides being a fun issue to look at, it’s a fun story to read. There’s Peter’s usual, witty Spider-banter, but Red Hulk plays the “straight man” and this makes for several truly funny moments (save for one very poor joke about abusive relationships).

I’ve read this issue several times, and it keeps getting more vibrant with every view. There’s a lot to like about Avenging Spider-Man, from Joe Mad’s art, to Zeb Wells’ writing, to the non-canonical nature of the piece. I’m very excited to see the next issue in a series that I hope goes on for a very long time. 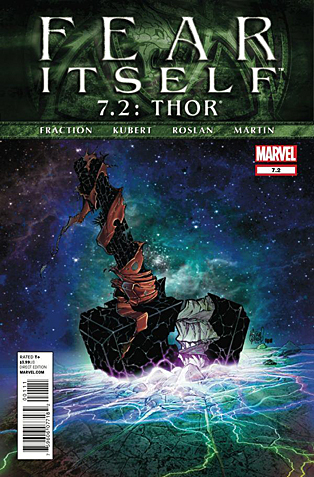 Whenever a hero dies in comics, it’s only a matter of time before he or she returns. Usually, the writers like to build a story up, introduce some new hero to take the old hero’s place, and then there’s a conflict of some kind when the hero returns. Think Batman: Knightfall, and The Death and Return of Superman. With Fear Itself 7.2, however, readers only have to wait until the end of the issue. Which leaves this reviewer wondering: what the hell was the purpose?

The issue is a dedication to Thor as seen through the eyes of all who loved him. Whereas Dan Slott packed his “Spider-Island” epilogue to the gills with resolution and new threads, Fraction does a nice job of letting the story breathe. Adam Kubert draws some nice shots of Odin mourning his son’s death, and he really plays with the panels. The issue has only one single-page panel, and where splash pages occur, Kubert puts other panels. This creates a seamless flow across the pages, and I couldn’t help but notice how easy it was to read.

The story, however, seems to serve no major purpose. No status quo changes have occurred, and even though Fraction introduces a new character named Tanarus, who will replace Thor in his eponymous title, Thor is very much alive at the end of the issue. Much like Hercules replaced the Hulk, Tanarus will probably run around smashing shit with his double-edged hammer. While I immediately liked the new character (because he’s shown holding a half-eaten chicken leg), I don’t see how readers can feel any emotional impact if the resolution fixes the problem before it’s allowed to resonate.

Fear Itself was a disappointing series, not because it was bad, but because it failed to have the same impact as other major series like Civil War and Secret Invasion, both of which had major impacts on the entire Marvel universe. Fear Itself should have been a story that focused solely on Thor. Making it an “event” implies that it is a major turning point in the Marvel U.

And in the end, I’m left with more ambivalence towards comic producers and their marketing engines. 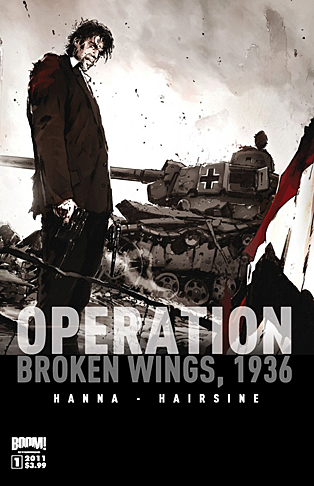 Bannen’s Book of the Week: I’m a sucker for spy stories and political intrigue, especially when they’re set in historically-significant time periods.

Operation Broken Wings, 1936 takes place during the Nazi regime in Germany, and it centers on a German spy who seems to be a double agent. When I first picked it up, I thought it would be like Fabien Nury’s I Am Legion – a story set in the same time period but dealing with vampires and whatnot. This comic is nothing like that. It’s good, strong storytelling that deals with one spy’s attempt to double-cross the people that employ him, while still maintaining his high rank within the Reich.

Broken Wings tells the story of a German spy who seems to be playing both sides against the middle. Hans Shoeffer is a dark, brooding character with strikingly impressive skills. Much like Batman and Sherlock Holmes, he’s a tactician who deconstructs his enemies’ weaknesses before he fights them. He also seems to be a person who, at one point in time, had an ability to disguise himself into any situation. Until, of course, he ended up scarred across the left side of his face, from the temple to the cheek. So while he lost his ability to blend into the shadows, he still comes across as an imposing and vital asset to the German secret police.

After a prologue setup in which Shoeffer meets with a peasant father and son, he is given an assignment to assassinate a British Aviation Engineer. While he’s initially reluctant, his interaction with the father and son comes back to haunt him, and he’s forced into taking the job. Much of the character has yet to be revealed, but what Herik Hanna gives readers is a slow burn – the book opens with Shoeffer in prison and then goes back to the beginning so people can see how he landed himself in the situation.

The book is unassuming in its delivery. It presents a very intricate, yet solid plot, with palpable characters and a compelling leading man. The story is dialogue-heavy but never feels bogged down. And while many stories have been set during the Holocaust, this one feels fresh, because it doesn’t resort to many of the usual stereotypes. At no point does the character profess that Hitler is an evil man. If anything, he’s an anti-hero who enjoys the position of power he has gained, and his motivations seem to stem from an alternate source.

Because Operation Broken Wings, 1936 is so subdued, it’s hard to articulate exactly what it is about the book that makes it so captivating. Trevor Hairsine’s art is serviceable but not earth-shattering. His page constructions set the tone of the piece in a way that allows readers to drift through the story. At no point did I feel like I was rushing, nor did the story feel slow. It moves with confidence, lacking any splash pages and only utilizing a full-page illustration once. But the picture isn’t meant to inspire awe – it’s used as a set piece for the story.

Hans Shoeffer reads like a darker James Bond – Daniel Craig’s Bond, for those who need a visual connection. He’s intelligent and precise, and while I wouldn’t call him gloomy, he definitely lacks any sort of lighthearted personality. Simply put, you believe that Shoeffer is a killer and a man who won’t think twice about snapping a person’s neck if he needs to.

Independent comics are usually hit or miss, so most times a limited series like this can be a crapshoot. But Operation Broken Wings, 1936 is the start of something great. It’s not an overpowering series, but it exudes confidence from its writer and artist.

Don’t pass on this one. It’s damn good storytelling.

Brian Bannen was in an abusive relationship with a Hulk for awhile (he didn’t like him very much when he was angry). Make him flinch on Twitter @Oaser.