Whether Green Lantern fans were disappointed or not with the movie this weekend, the brightest day is yet to come.

A sequel has already, pardon the pun, been green-lit and comic book readers knew even without the [SPOILER ALERT] big yellow hint in the last scene of Green Lantern that Sinestro would likely be powering up the villain’s role in the next movie.

And that’s the best news we could hope for, especially for those who swore a different kind of Green Lantern oath when they saw the overly computer-generated Parallax. How can you not love the idea of Strong, who has proven his on-screen menace as the villains in Kick-Ass, Robin Hood and Sherlock Holmes.

During the course of the interview it becomes clear just how seriously Strong takes his craft.

“An earthbound human villain often is just a broad stroke within the narrative and is designed to be there to enable the good guy to win in the end and to give us something to bounce off that we hate,” Strong told me and several other reporters during a visit to the New Orleans set of Green Lantern last summer.

“I was amazed to discover with this backstory and where he comes from and his passion for the Corps, there is so much more to draw on than the bulk standard two-dimensional villain required for the story,” he said. “There’s a lot of pain in his background… why he is the way he is, why he turns the way he does. There’s a rich vein of stuff to draw on.

That day on the set, August 30, was Strong’s birthday – and to show how far removed he is from the twisted villains he plays on the big screen, he came in on his day off just to talk to the reporters.

We even got to share in his birthday cake in the craft services room on the set (with a big icing Sinestro face on top of course), though by the time the reporters got to it we were competing with our fellow vermin, the flies (which grow to Parallax size in the Louisiana heat).

During the course of the interview it becomes clear just how seriously Strong takes his craft: he carried around trade paperbacks of classic Green Lantern runs in his bag and was always picking Geoff Johns’ brain on the set about Sinestro’s back story.

“The source material in itself is gold dust, so it’s not difficult to want to be true to it,” says Strong.

It pervaded everything he did: to mimic Sinestro’s arrogance in the comic books, Strong adopted his character’s trademark flying style with his arms folded across his chest – even if that was initially hard to get used to on the wire harnesses for shooting the blue screen scene. And he fought hard to keep the comic book villain’s trademark look, based on British actor David Niven (“I don’t think of David Niven as being a particularly sinister guy,” Strong quips), when the make-up people were toying with a ponytail look that was more like Star Trek: The Next Generation’s Worf.

His classical Shakespeare training also came in handy during his signature scene in Green Lantern, with a rousing Braveheart-like speech at the central battery of Oa to galvanize the Corps to battle Parallax.

Whatever you thought of the movie, only an alien from outside Sector 2814 could come away without getting goose bumps during that speech.

“I just give an extra bit of strength to the voice to give Sinestro the strength required, because I don’t have the benefit of being able to animate him and give him poses like you do in the comic and give him a fantastic, kapow! background to suggest that strength,” said Strong. “I have to do all of that through the voice.

Count Hal Jordan himself, Ryan Reynolds, as one of the biggest fans who can’t wait to see what Sinestro is capable of.

“Mark just brings such a weight and a dignity to his character,” said Reynolds. “I don’t want to speak for him, but when I was working with him it felt like I was in the ring with a bullfighter. He’s using my energy against me all the time. He’s so elegant in the way he moves and the way he behaves and the way he speaks and it’s minimal effort for maximum gain for him and that’s all he needs.”

And he’s a character that makes you think, “Wow, I’m curious to see what this guy is like when it’s maximum effort. He’s obviously going to be something to contend with.”

With Strong, at least, the ring chose wisely. Even if you didn’t love Green Lantern as much as you wanted to, don’t give into fear: the best is is yet to come. 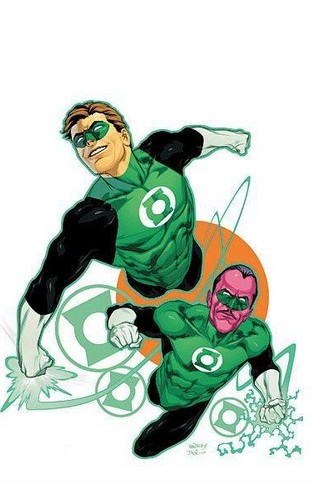 In Brightest Day, In Blackest Night, No Story Shall Escape My Site

Green Around the Gills