The first thing I did when Super Scribblenauts came in the mail was work through to a stage with a lot of space for me to mess around in. This was necessary because it was imperative for me to find out:

A. If Cthulhu was still in the game.

B. If he now had what it takes to take down God Almighty. 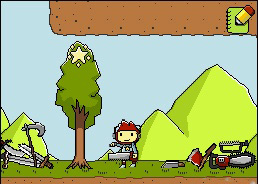 Some background is in order. Super Scribblenauts (and its predecessor, regular old Scribblenauts) is a puzzle game for the Nintendo DS. The object is to collect Starites by typing words. The words become real within the world and you can use the objects to achieve your goals.

For me, the first game was a mess of broken controls and dodgy physics that were, amazingly enough, overcome by the clever premise and an incredibly deep vocabulary. The puzzles quickly became secondary to testing that depth and answering the age old question of “Who would win in a fight?”

The prospect of a second installment with improved controls and adjectives to determine object behavior was exciting.

So the time had come. I summoned God, who walked around appraisingly. Then, just to try and give him an edge, I called up a Giant Red Cthulhu but to no avail. God effortlessly trounced the unspeakable cephalopod. I was disappointed, to say the least.

Who could take on God?

Perhaps the Devil? No, at the first sight of the Almighty, Satan hightailed it out of there and God made short work of him once he caught up. A Brave Devil stood his ground but that only made the beating quicker.

So there was God, walking smugly around his Creation. Surely, something could defeat him.

Something like an Atheist! I typed in the word, unsure if the game would accept it and not having any clue what to expect if it did. What appeared was a sullen boy in a black t-shirt with a skull on it. He walked right over and touched God. God fell over and disappeared in what could only be described as a “puff of logic.”

Somewhere, Douglas Adams is laughing. Or he would be, if he believed in that sort of thing.