What do we remember most in those stories we tell with math and dice around the table (or the Discord) with our friends? The moment when every breath is held and the desperate, great clatter of dice spells the outcome of a pivotal moment. Is it triumph or failure? Is there triumph without failure? Does it matter? The best part of the game is the moment the dice go bad. Not only because it makes our future successes all the sweeter, but because a catastrophic failure is the moment when the emotions are the highest and our ability to alter the situation is at its most potent. However, it’s victory above all that most games direct us to in their rules and their math. They create a context wherein the most important thing a player can do is win. Using Aid rolls in Dungeon World, for instance, or Pushing Yourself in Blades in the Dark. Everything directs towards victory. They don’t give the players much space to consider: would it be more interesting here if I failed? Games like this typically advise the GM to “fail forward,” meaning they ought to use a failure as a way to change the situation and make things more interesting for the player even if it’s not necessarily empowering to them. It’s this moment, where the player knows the situation is going to drastically change that we often find our most exciting narrative surprises.

In an Impulse Drive game I recently ran, the party was split up between two linked ships. One group was trying to free hostages on the merchant ship and, on the pirate ship, players were attempting to steal information from the captain without getting caught. This was supposed to be a routine mission, but because of a series of absolutely devastating dice rolls, two of the characters were captured by the pirates and the other two were set adrift on the party’s (now totally busted) ship. This led to an entire session with two new guest characters and a daring jailbreak. While the players enjoyed the diversion, they didn’t have much say in how this was going to go down, or how to push the game towards this kind of excitement. The impetus is on the GM to narrate this change in fortune. The players do not have many means, in most games, to push for this kind of trouble for their characters. Since the majority of RPG experiences are meant to be heroic stories about overcoming adversity and fighting for victory, we see systems tuned to just that for players. 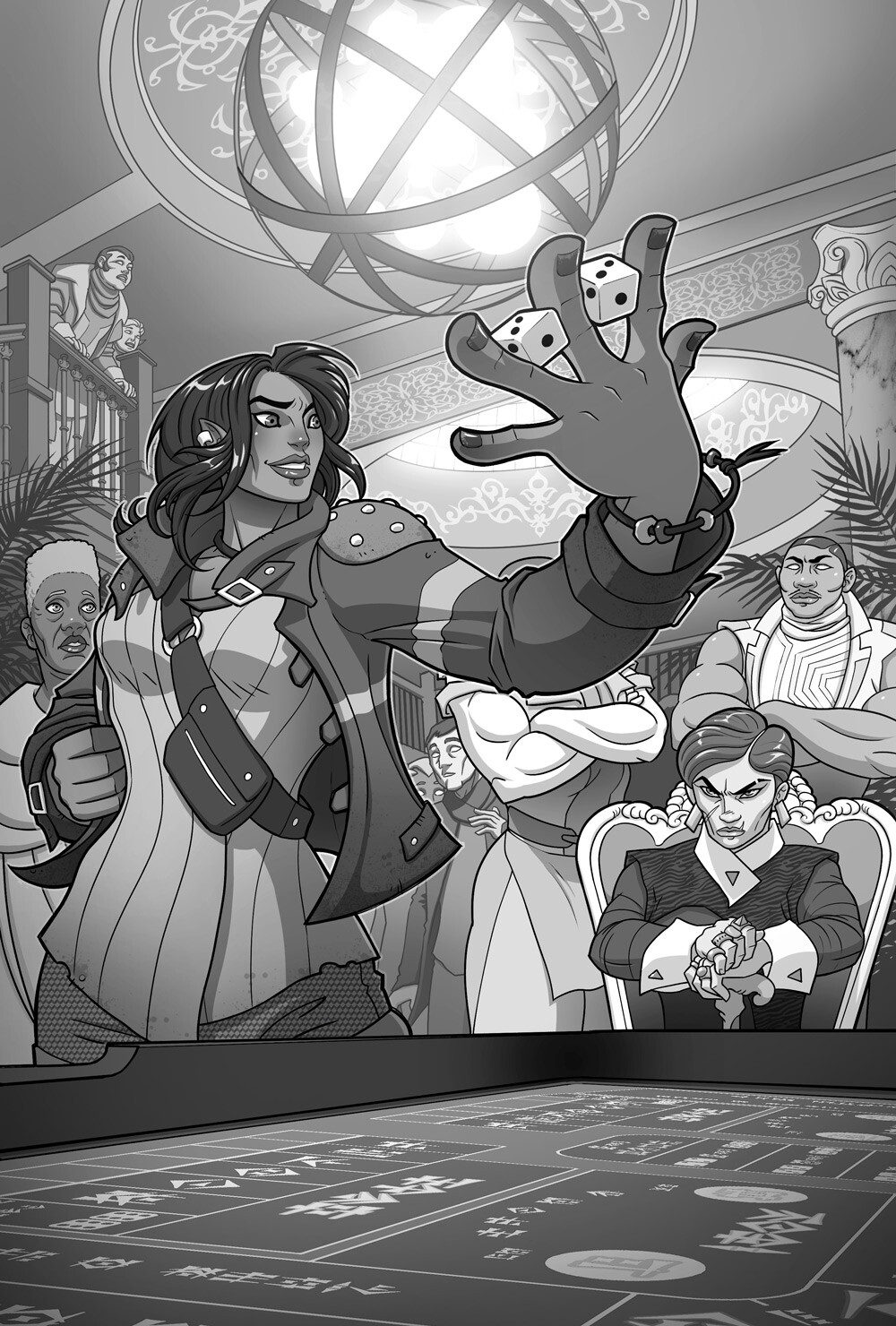 Impulse Drive by Adrian Thoen is a PBtA game, meaning it’s based on Apocolypse World, by D. Vincent Baker and Meguey Baker, where the players play the crew of a spaceship and go on daring swashbuckling space adventures. It’s noteworthy when imagining a gamespace which can shift away from absolute victory-focused outcomes which are more than just the GM coming up with interesting forms of failure.

I want to focus on two particular mechanics Impulse Drive has which help lead to novel forms of player driven failure.

The first noteworthy mechanic is the Intimidate move. It comes into play when a character is described using “threats to bully someone into doing what [they] want.” So far it’s your standard move allowing a character to lean on an NPC to get their way. However, it becomes very interesting in the choice of the outcomes. On a fully successful role, one of the options is that the NPC forces the player to follow through on their threat and “suck it up.” This is very powerful and, in my experience, quite shocking to players who are used to getting their way in a traditional sense. It’s understandable players’ expectations would be for a series of static accomplishments rather than a flow of unique opportunities for interesting dilemmas.

This move is very meaningful for creating a play environment where characters know that if you threaten someone with violence then you truly aren’t guaranteed to get your way. I believe Thoen might be saying something about what violence means within the genre of space opera/space adventure. This impetus is entirely on the player to choose to escalate the situation with violence.The situation doesn’t change because of the outcome of a roll, when you find out how effective you were at getting your way, the situation is changed when the player makes the conscious decision to make the threat in the first place. This ensures player freedom to alter the stakes and create chaos for themselves with total intentionality. 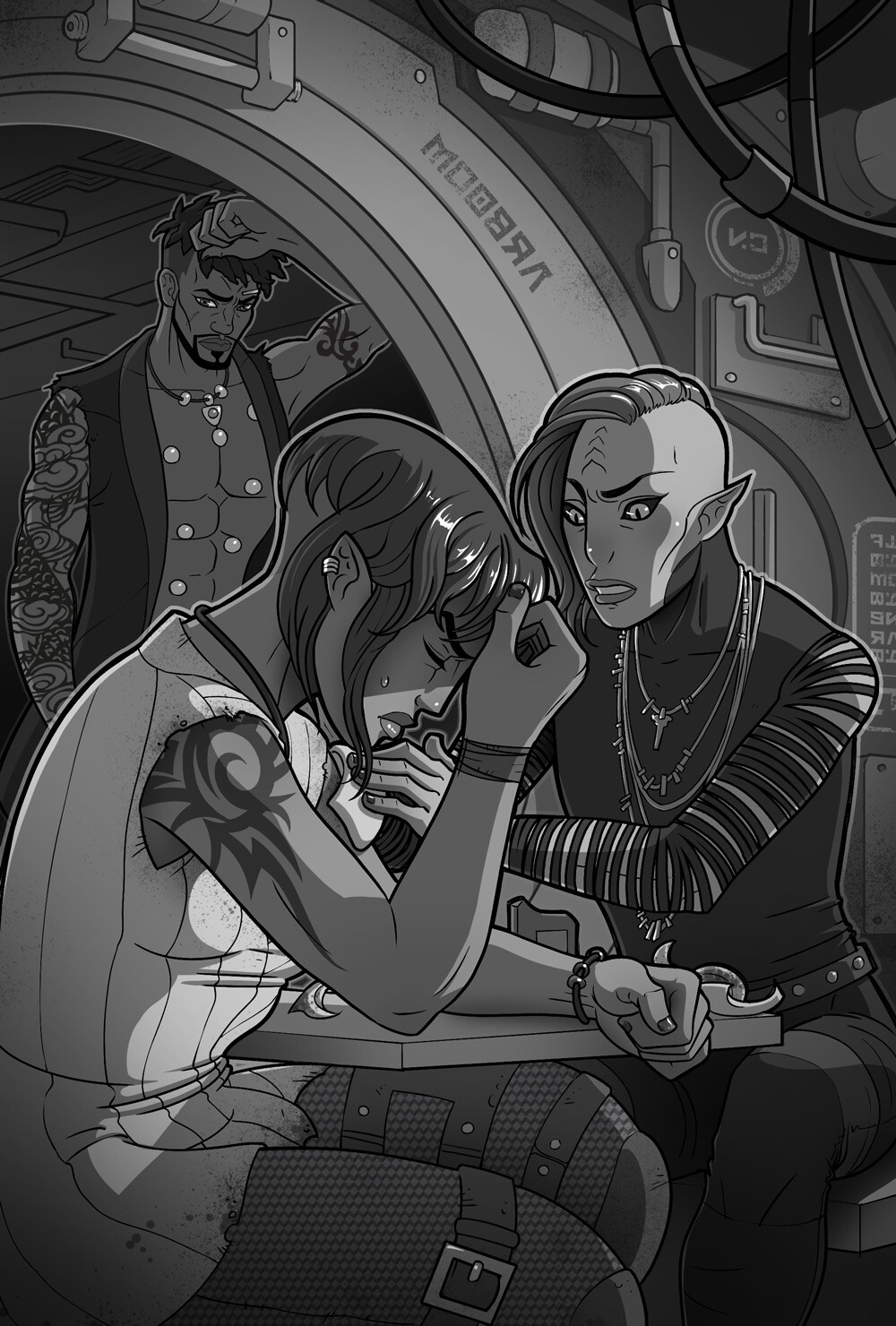 That same intentionality is carried into any other situation Impulse Drive players may find themselves in with Hooks. Hooks are short statements chosen by the players about their character which describe their personal goals or instincts. According to the rulebook, “Hooks are designed to encourage and reward character play, to get players to show and explore the quirks, weaknesses and flaws of their character. It’s also a chance for players to say how their character is special.” This aligns Hooks closely with what might be called Drives in other games and obviously share DNA with Apocalypse World’s Histories. But what makes the Hook mechanic so interesting is the move “Get Hooked.” This move is activated whenever the GM, the PC or another PC notices one of a character’s Hooks would apply to a situation. The player controlling that character then gets to decide if they’d like to take a statistical disadvantage on an upcoming roll relating to that Hook. This could involve betraying the group to pursue their own interests or feeling the urge to protect another character despite the complications. But that’s it. The player does not get any advantage for taking this disadvantage. They are simply choosing to say “I acknowledge that my character is compromised at this moment,” and the rules allow that to be reflected in the math.

This isn’t a minute part of play, either. Impulse Drive has you begin every session with each player stating their Hooks out loud and discussing possible changes to them. The Hooks are very much centered in the minds of the players and GM and are integral to expressing who the characters are and what their relationship to the rest of the world is. And it works! Players will gladly put their character at disadvantage just to express how complicated and unique they are. And then, the dice outcomes are electric. On a success, they really feel like it was a show of strength and spirit, and on a failure, the player will inevitably have a hand in crafting and contextualizing what happens next.