“For all you know they could fly.”

I like monsters. It’s such a part of my identity that it’s usually right there in my bio. Yet even I’m willing to admit that monster movies are all too often dreck. Sure, there are plenty of great ones, but for every great one, there’s a terrible one – sometimes the good kind of terrible, more often not.

When I was a kid, I had a short list of favorite monster movies that had come out during my lifetime, and Tremors was right at the top. My memories of childhood are scattershot, at best, but one early one involves going to the theater to see these subterranean desert monsters for the first time.

I almost got up to leave after the early, still pre-monster scene when Val and Earl find the severed head in the dirt – that scene scared the crap out of me, for some reason – but my mom wouldn’t let me. We had paid for the tickets, by god we were going to watch the whole damn movie.

Lucky for me that she made me stay, because I loved every other second of it. Here’s the thing about Tremors: it has aged better than pretty much any other movie on that very short list. There are a lot of reasons for that, beginning with the practical effects for the massive sand worms that the film names “graboids,” which are still jaw-dropping some thirty years later, in the unsparing clarity of HD. 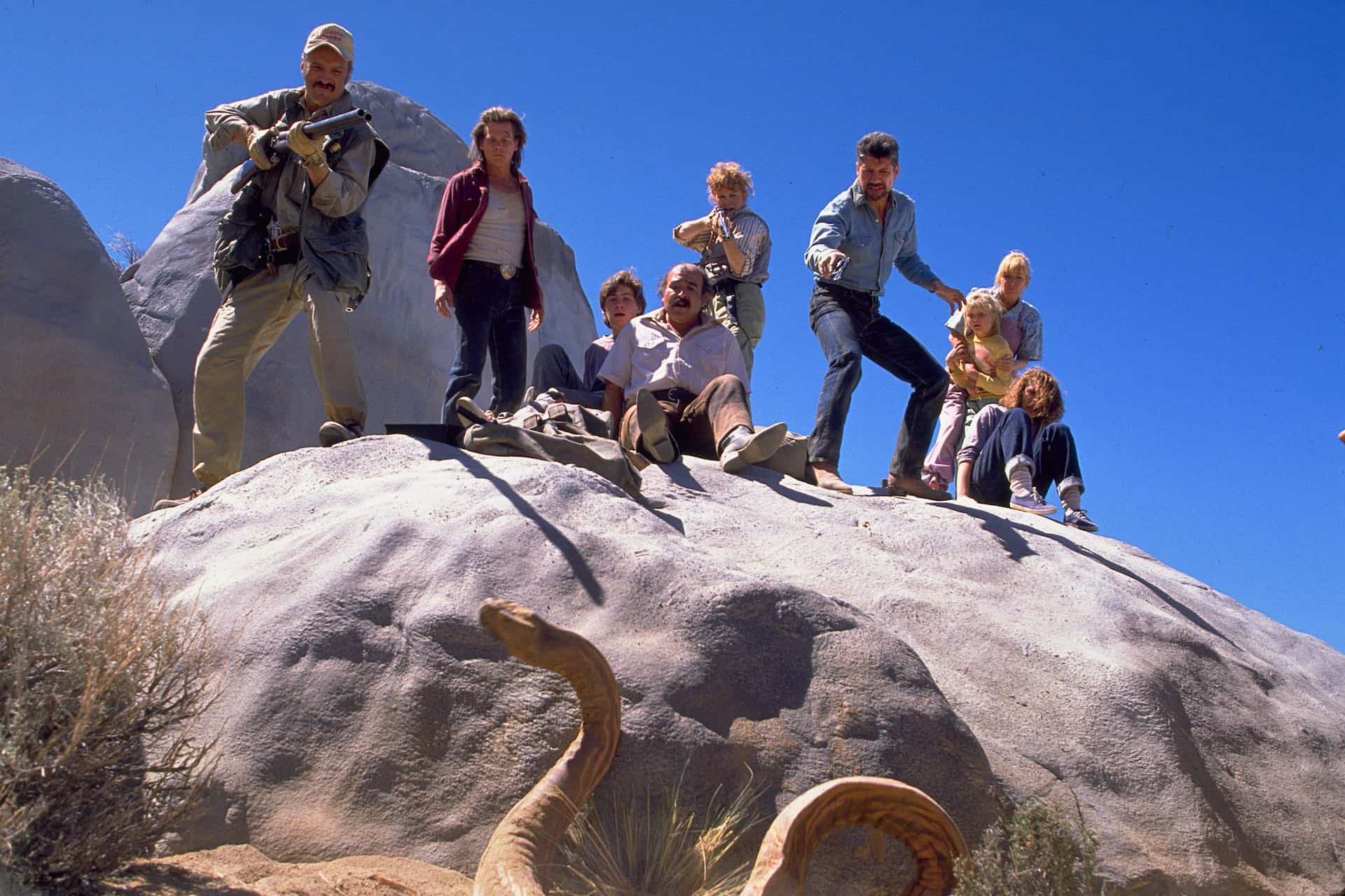 It’s easy (and correct) to heap praise on practical effects, speaking broadly, and on the ones in Tremors, more specifically, but that’s far from all there is here. Half-a-decade before Scream, Tremors is a self-aware horror movie, but not in the same Easter Egg, knowing wink way that film would popularize.

Tremors is aware of the familiar ground it’s treading (or burrowing under), tapping into the primal well of ‘50s monster movies. It’s aware of the ridiculousness of its premise but, more importantly, it’s aware of how people would actually react to such an event – by monetizing it.

Tremors gave rise to a spate of sequels that are still (somehow) going, even though everything after the fourth one should be shot out of a cannon into the sun – and even that one is debatable. There was even a short-lived TV series. For a surprising amount of time, the sequels and spin-off series were all remarkably good, and the thing they got right more than anything else – the thing that Tremors understood in a way that maybe no other monster movie ever has – is that this would get merchandized in a heartbeat if it ever actually happened.

Tremors 2 shows us a graboids-themed arcade cabinet and discusses Val and Earl starring in a Nike commercial where they’re running through the desert. By Tremors 3, Perfection has become a tourist destination and Walter Chang’s store sells mostly graboids memorabilia. 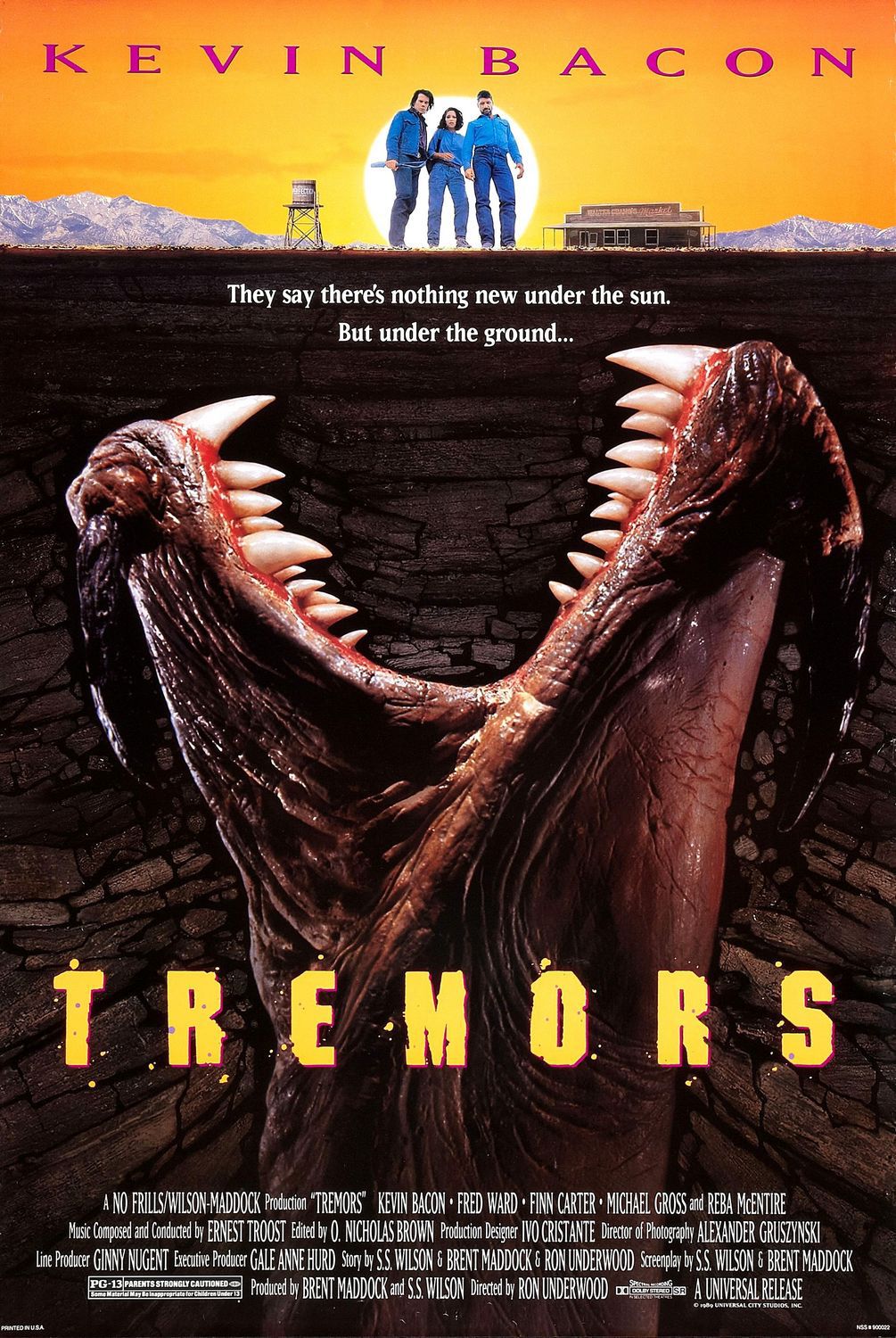 What it also shows is how quickly even the most striking thing in the world will get merchandized, normalized and then forgotten. Perfection may be a tourist trap, but it’s more dying roadside attraction than Disney World. Imagine a Jurassic Park movie set not when the park is flourishing and new, but twenty years after it has become old news and the funding has dried up. Half the rides are closed, storefronts stand empty and the dinosaurs have started to show their ribs, when they show up at all.

Sure, all of that is in the sequels, but the groundwork for it is already here in the first film, with its blue collar, get-rich-quick protagonists. When Val and Earl first discover one of the graboids after tearing its head (which turns out to be its tongue) from its body with their truck, they sell it to Walter Chang (played by the incomparable Victor Wong) for $15, and he proceeds to start charging everyone in town to get their picture taken with it.

Tremors is more than a clever gimmick and some good effects, though. It’s the rare monster movie that never takes a single misstep. The pacing is perfect, with its gradual-yet-steady build to the growing reveals of the monsters, and the script is always clever. Even scraping off the scrim of nostalgia, Tremors is a flick with almost nothing to complain about.

As someone who writes what I often refer to as “fun horror,” I’m always on the lookout for other stuff that fits the bill, and horror doesn’t come much more fun than Tremors. It’s also a movie that’s smart enough to not over-explain its monster. Everyone speculates about where the graboids come from, and why no one has ever seen one before, but no one knows, a fact that (mostly) stays true through the majority of the sequels, even as the filmmakers (delightfully) complicate their central creatures.

Chances are, though, if you’re reading this, you already know whether you like Tremors or not. This review is as much a review of the new Arrow Video Blu-ray as of the movie itself, and I’m happy to say that Tremors has never looked (or sounded) better than it does on this new 4K transfer.

The special effects have always held up, despite the fact that they’re pretty much always shown unsparingly, in broad daylight. That remains true here. The real selling point of this new Blu-ray is not the new transfer, though, it’s all the special features. And the Arrow Video Blu is loaded. 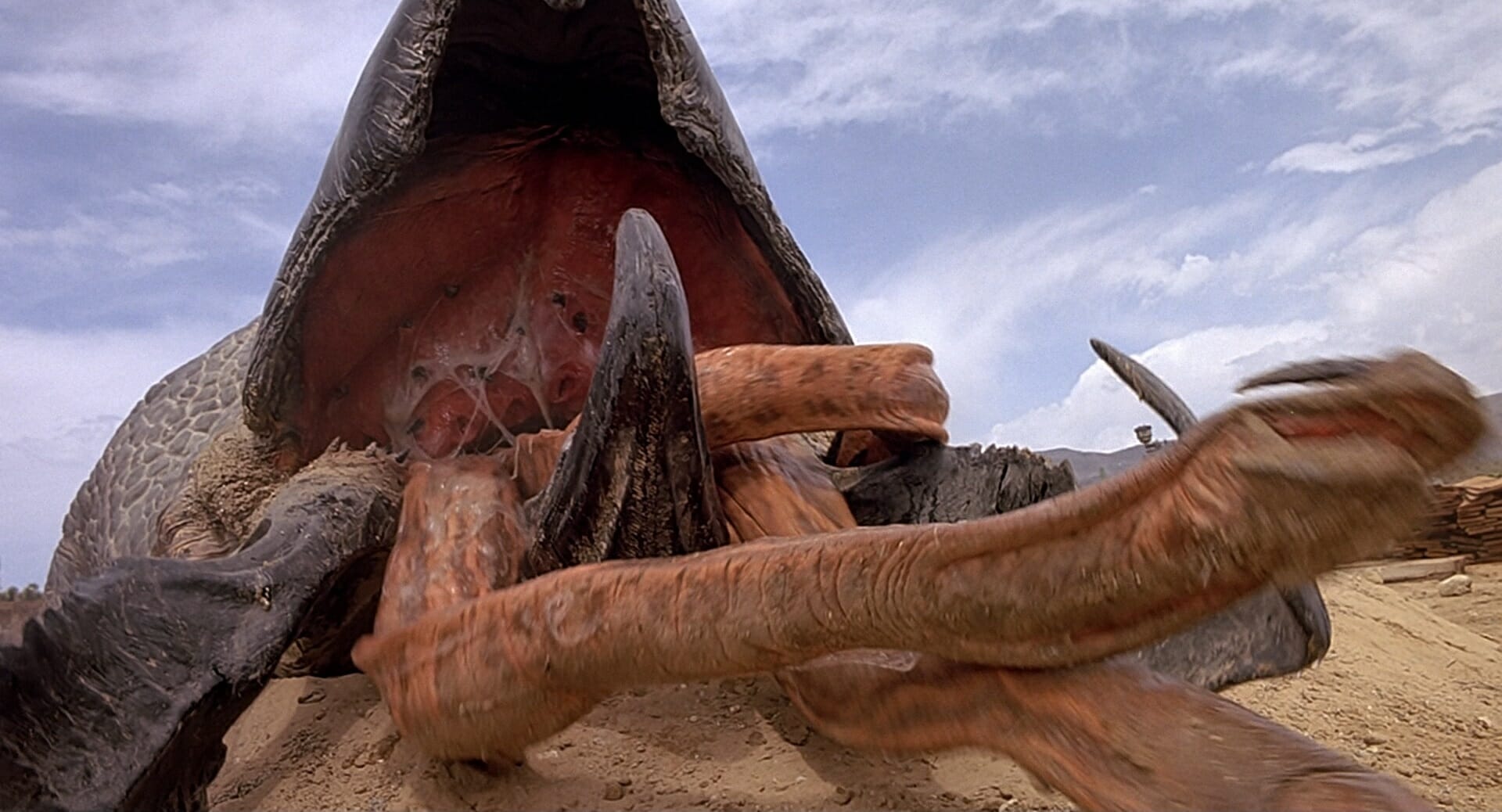 There’s a lengthy booklet in the box, along with a double-sided poster, some lobby cards and a mocked-up coupon to Chang’s Market. The discs themselves are decked out in commentary tracks, interviews, making-of footage and, in the limited edition, a disc containing (among other stuff) three short films produced by the filmmakers, including S. S. Wilson’s short student film “Recorded Live,” which would probably be worth the price of admission by itself.

When I was younger, the version of Tremors I watched the most was on a VHS tape that I had recorded off network TV. This meant that the movie had been edited for television, which primarily meant overdubbing all the curse words and, weirdly, the instances of taking the Lord’s name in vain.

As such, I have an odd fondness for the awkward overdubs, which meant that my favorite special feature was actually “Pardon My French,” a new segment made for the Arrow Blu that featured the original footage and then all of the network TV overdubs. While “fooled you” is probably the most memorable of these, upon watching through the featurette I was most amused by “You gotta be brainwashing me.”

The Thrill of Being the World’s Only Active Player