“The grief of the realm of animals exceeds that of humans by hundreds of times.”

Whenever you write about films (or books, or paintings, or any other medium of creative expression) you are bound to, sooner or later, run into more than a few that you are poorly equipped to write about. The Mad Fox is one such movie for me, and I can take comfort only in the fact that, most likely, many members of my potential audience are just as ill-prepared for it as I am, and hope that you will take my inadequacies in the spirit they are meant.

What makes me say all that? Let’s start here: The Mad Fox is an adaptation of a Bunraku play that premiered in 1734. For those who don’t know, Bunraku was a very specific kind of traditional Japanese puppet theater. Like many popular Bunraku plays, the one upon which The Mad Fox is based, which bears an unwieldy title that translates to Ashiya Doman and a Mirror of the Imperial Court, was later adapted to the Kabuki stage.

Kabuki, for those unfamiliar with that form, is also a type of traditional Japanese theater, which Wikipedia helpfully describes as “dance drama.” Now, many Japanese films are adapted from stories that were first popularized on the Bunraku or Kabuki stage, and knowing all of this background is rarely integral to appreciating them, but The Mad Fox is a bit of a departure.

Broken into clear acts – at times literally divided by the pulling back of a very specific curtain called a joshikimaku, which was used in the Kabuki theater – the film mixes naturalistic sets and shots with stagebound sequences that explicitly reference the film’s theatrical origins. In perhaps the most striking of these, a dream-world created by a fox spirit collapses in a puff of smoke, as the set itself literally folds up in-camera, transforming from a run-down house into a grassy field through nothing more than some ingenious stagecraft. 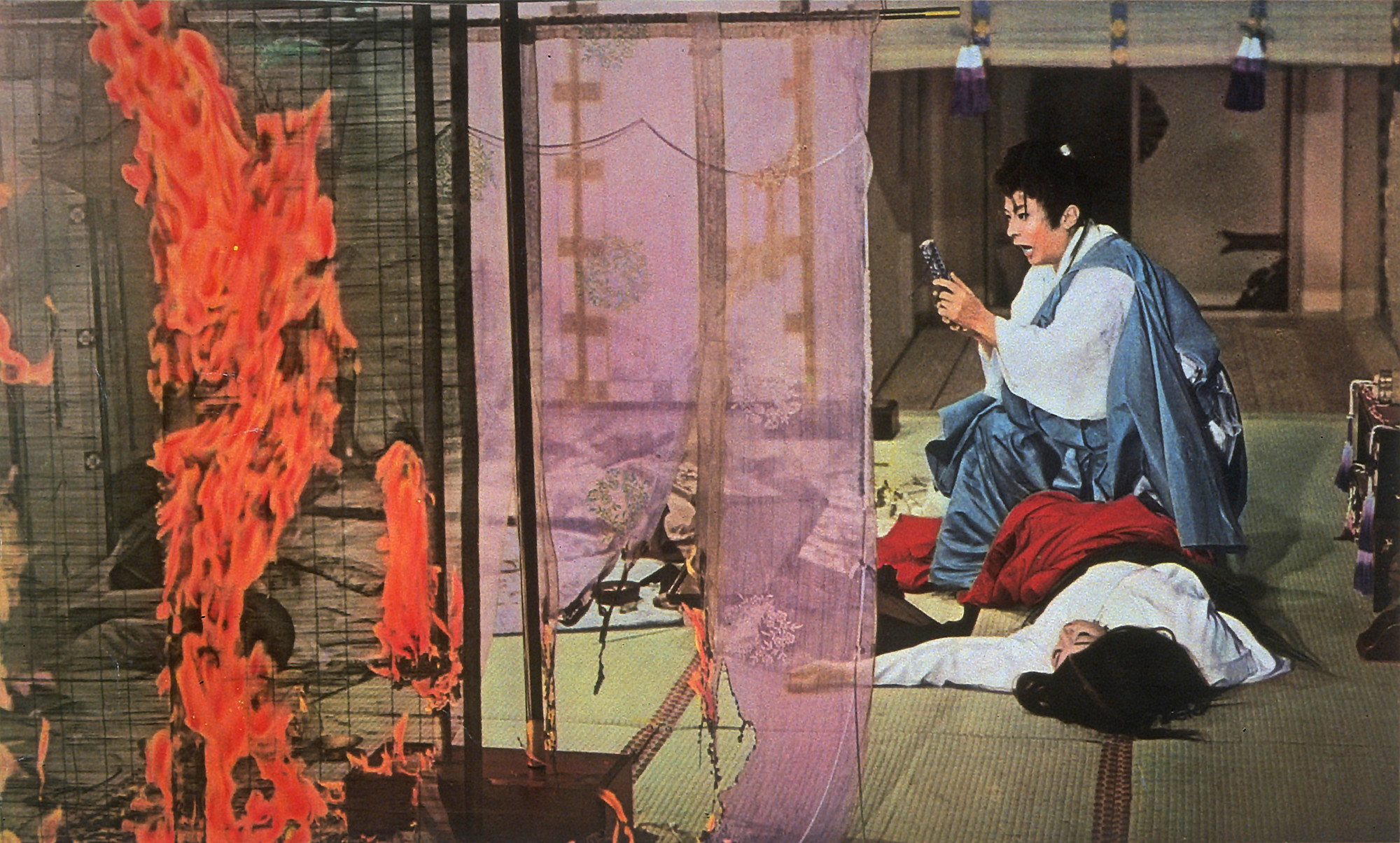 It isn’t just the theatricality of The Mad Fox that makes comprehending its origins so germane to the film, however. The booklet that accompanies the Arrow Academy Blu-ray includes an essay by Ronald Cavaye, a translator for Kabuki and Bunraku theater, which is the only reason I can write as intelligently about any of this as I am managing so far.

In it, he describes the traditional narrator of Bunraku plays, accompanied by the three-stringed shamisen, which crops up in the middle of The Mad Fox, and continues sporadically for the remainder of the film’s running time. He points out how the headband that our protagonist Yasuna wears in the traditional Kabuki dance sequence that depicts his descent into madness is a specific convention of that theatrical style, used to indicate illness.

Is knowing these things necessary to enjoying director Tomu Uchida’s The Mad Fox? Not at all. I didn’t read the liner notes until after I had watched the film. It’s a gorgeous, stylized, classical melodrama all on its own. But understanding them – like knowing why that particular curtain is the one that gets pulled aside – transforms the film from a simple curiosity into something much deeper.

To the best of my knowledge, I have never seen another film by Tomu Uchida who is, as far as I can tell, probably most famous in the west for his 1955 film Bloody Spear at Mount Fuji. The booklet that accompanies the Blu-ray makes a case that he would have been a more vaunted director had his oeuvre not displayed a “huge aesthetic variety” rather than an “easily identifiable signature style,” which made him a “difficult fit for auteur-centric Western critics.”

So, going into The Mad Fox, I was dealing with layers upon layers of cultural ignorance. If I had ever seen a Bunraku play – or a Kabuki one, for that matter – I would probably have immediately identified elements of them in the film. Even with my relative ignorance of the subject, I spotted things that I knew were traditional, such as the immobile masks worn by the actors playing kitsune, or fox spirits.

As it is, being the ugly American that I am, the film reminded me instead of the plays of Shakespeare. Here we have the doomed loves, the personal betrayals that set the stage for political upheaval, the mistaken identities and exact doubles, the overwrought madness, the whole thing – never mind that we can look to the plays of the ancient Greeks and find all those things, too.

And ultimately, that’s the power of The Mad Fox, in part. It will feel familiar to you, even if you’ve never seen a Kabuki or Bunraku play or, indeed, another Japanese film. That it’s set in a particular period in Japanese history, replete with references to the mediums from which it draws, and that the original play even had the son of the film’s ill-fated human/fox couple grow up to become Abe no Seimei, a real-life person who attained mythological fame, only add layers to the film’s familiar core.

Around that core, Tomu Uchida has created a visual feast of colors and stagecraft. In the first Kabuki sequence, our protagonist dances out his madness against a backdrop of pure yellow as the stage slowly revolves beneath his feet. When he realizes that the life of blissful – if penniless – domesticity that he’s been living with the fox spirit has all been a dream, that realization is underscored as the stage once again literally moves beneath him.

If you watch The Mad Fox, though, do yourself a favor and also read the booklet that accompanies Arrow Academy’s lovely restoration. Delve into the bonus features that accompany the disc. The familiar and haunting story, the set direction and stagecraft, are only part of the puzzle.

Man Against Time: The Big Clock on Blu-ray

The Hateful Eight: A Microcosm of America