Director Robert Radler’s other credits include the first two movies in the Best of the Best franchise, a bunch of episodes of various Power Rangers shows and a couple of later sequels to The Substitute. Which makes a lot of sense, because if those three things got into a telepod together, this movie is what would come out the other side.

Over at Cinema Crazed, Felix Vasquez Jr. called Showdown, “Almost exactly the kind of film Karate Kid would have been if originally conceived in the nineties,” which is also pretty accurate.

Stop me if you’ve heard this one: Ken Marx, a high school senior played by 23-year-old Kenn Scott (looking even older) moves from a small town in the Midwest – “Salinas, Kansas,” according to him, though given that Salinas is in California, he probably meant Salina, and while Salina isn’t a particularly big town, it almost certainly has more than fifty people in a given high school class – to a new school populated by cartoon character stereotypes.

Once there he immediately hits on the girlfriend of possessive bully Tom. When Tom beats Ken up (several times, actually), Billy, the school janitor, played by Tae Bo inventor Billy Blanks, eventually intervenes and decides to take Ken under his wing and teach him self-defense. 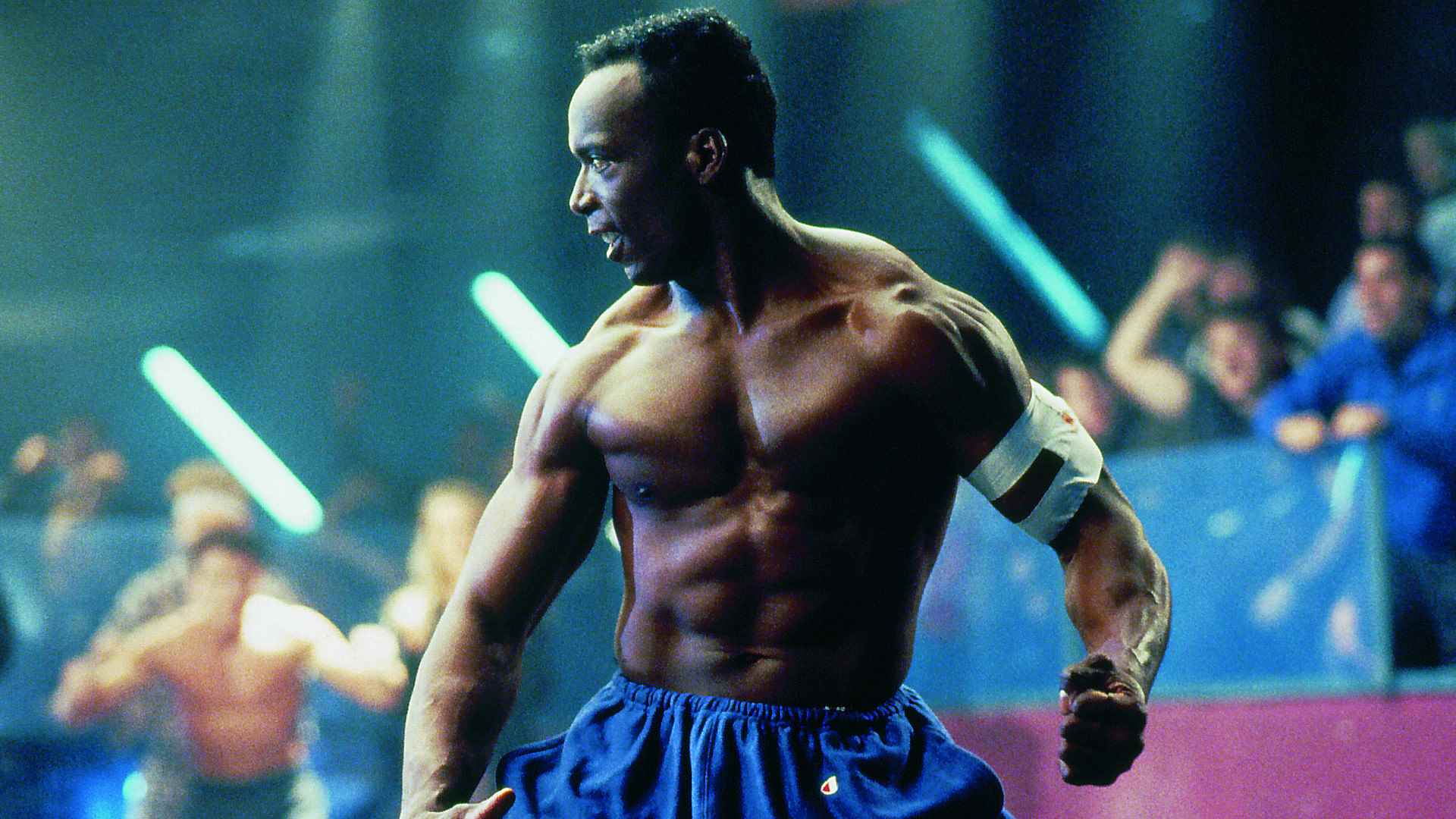 The film even has a gag about its own similarity to Karate Kid, as Ken assumes that Billy putting him to work as a janitor is secretly teaching him martial arts moves. Nope, Billy informs him. It’s just getting him in shape and teaching him humility – and, coincidentally, getting some of Billy’s work done for him.

Unfortunately for them, Tom is also training at the dojo of a Saturday morning cartoon villain named Lee (played by character actor Patrick Kilpatrick) which is the headquarters of an illegal underground fighting ring. Of course, Lee is also tied into Billy’s tragic backstory, which we see before the film’s opening credits.

It seems that Billy used to be a cop, before he accidentally killed a kid while breaking up a house party. He even gets a dramatic “Nooooo!” as the fadeout happens. This leads to him quitting the force and becoming a janitor, like you do. Naturally, Lee turns out to be the kid’s older brother, though none of this is actually particularly necessary to the plot, since by the time the two square off, they have plenty of other reasons to want to beat the crap out of each other. 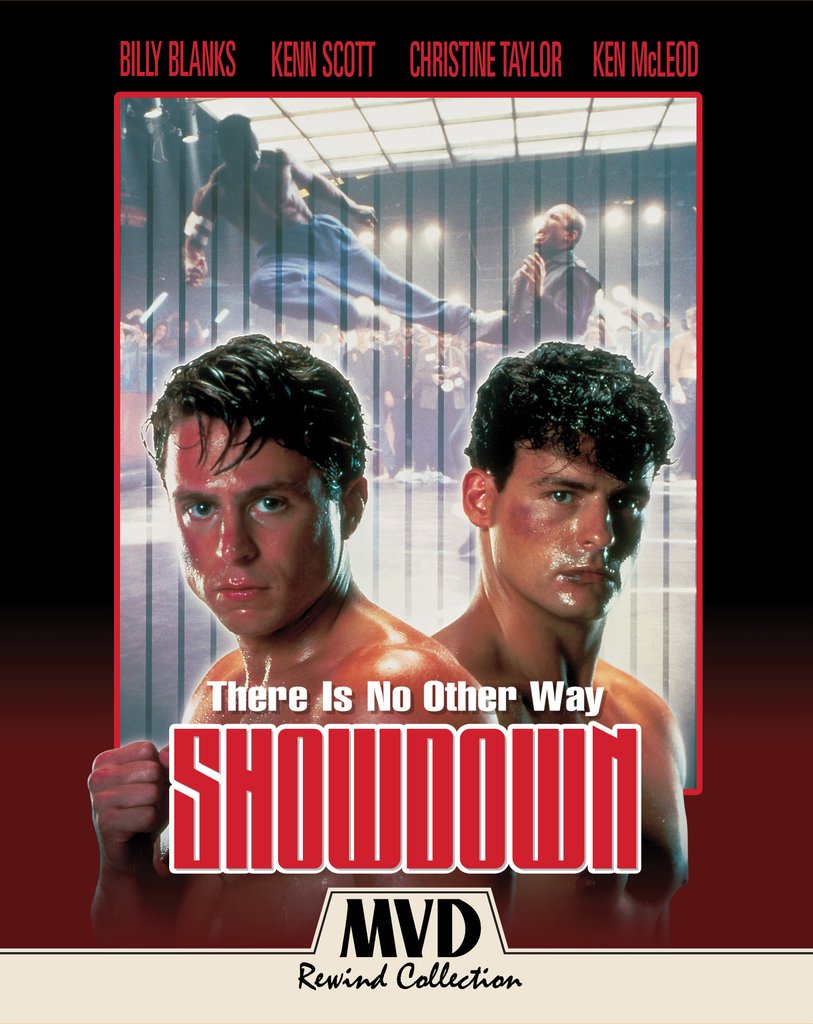 Once Billy and Ken do finally start practicing martial arts in an extremely leaky boiler room/garage/warehouse/who knows at around the film’s halfway point, we are treated to a series of training montages set to power ballads and a sax-heavy score that sounds, at its most rousing, copyright-infringingly close to Cyndi Lauper’s “Time After Time.” The soundtrack includes a bunch of songs with titles like “Streets of Rage,” “Loser Takes All,” and “Draw the Line,” all performed by a couple of bands whose names are just a string of initials – D.F.M. and A.Z.R.O.

Did we really need another riff on the Karate Kid theme? Probably not. But since we’ve got one anyway, the end result is enjoyable enough. Showdown looks fine most of the time, and the fights feel less choreographed than in many of their peers – every now and then the fighters will simply tackle each other.

For those who have been following along with my reviews of other MVD Rewind titles, Showdown will be full of familiar faces. The actor who plays the obligatory comic relief best friend character here also plays a gang member in Double Dragon, while abusive boyfriend Tom makes a brief appearance in that same film. Meanwhile, the school’s fast-talking vice principal is none other than Brion James, most famously from Blade Runner, but we recently saw him in Albert Pyun’s kickboxing cyborg movie Nemesis.

Our lead actor is most famous for playing Raphael in Teenage Mutant Ninja Turtles II: The Secret of the Ooze, though he also directed a 2007 film called Adventures of Johnny Tau: Rock Around the Dragon and was one of the two cops who get menaced by a T-Rex skeleton at the end of Doctor Mordrid.

“Enjoyable enough” is about all Showdown ever really aspires toward. Any time it dips its toe into heavier themes, it dips back out again just as quickly. There’s plenty of subtextual stuff going on about latchkey kids (no one seems to have any parents except Ken, whose single mom works nights), violence in schools, romantic partner abuse (see Julie’s genuine terror when she thinks Tom might catch Ken talking to her) and even an odd sort of human trafficking, as Lee and his manipulative right-hand woman lure kids into dangerous underground fights with promises of money and implications of sex. 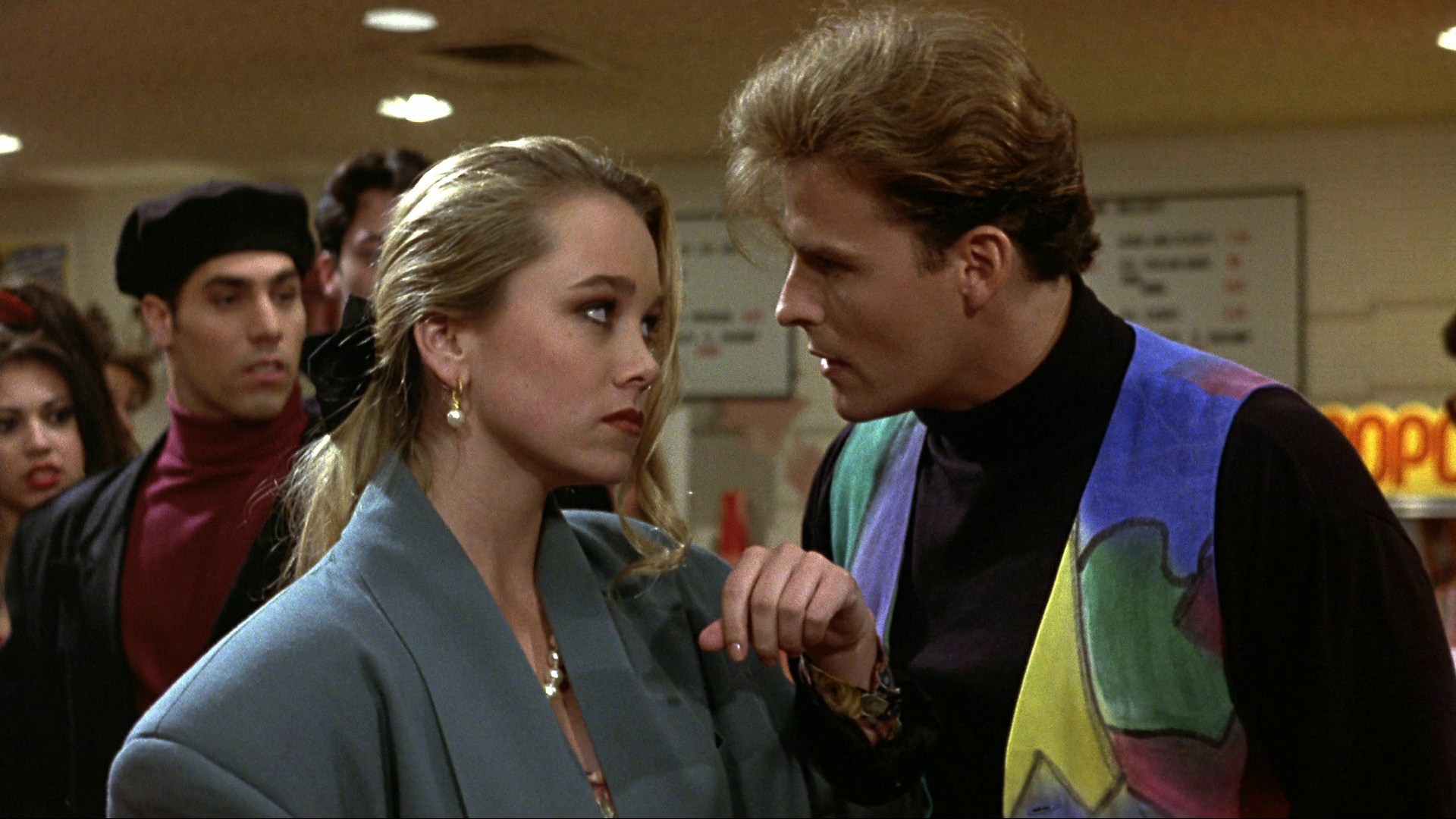 None of it goes much deeper than knocking the bad guy out and now everything is okay, though. Tom even gets some mild redemption in the film’s final moments, his earlier abusiveness apparently forgiven and forgotten. In spite of an opening text crawl which states that, “They are learning at an ever younger age that violence is not only tolerated, but often expected… and sometimes required,” when it comes to addressing any of its heavier themes, Showdown mostly pulls its punches, content to remain a(nother) ‘90s reimagining of Karate Kid and little else.

On Blu-ray for the first time, the MVD Rewind release of Showdown comes with a fold-out poster and lots of featurettes, including a feature-length “making of” documentary on the film, and a 47 minute featurette about the fights – which probably aren’t 47 minutes long themselves.

The Toxicity of Power in Devil May Cry 5