I have been thinking a lot lately about the constant changes to and eventual decay of our physical bodies (don’t ask me why, maybe something about living through a late-stage pandemic, maybe because my back hurts from hunching over on my couch playing videogames).

I have often wished for nanites in my bloodstream that would constantly circulate through my body and fix whatever might be wrong with me (a regular occurrence in science fiction; Scott Westerfeld’s Uglies comes to mind). Then I wouldn’t have to think about my body as much.

Lately, Skyrim’s 10th Anniversary Edition has been distracting me from my own physicality. Thoughts of my avatar’s body still cycle through the usual concerns: what’s my max HP, how many health potions do I have stashed, how high have I leveled my restoration magic? But thoughts of my earthbound body fade.

In Skyrim, if I get sick, I take a potion. Bludgeoned in the head with an ebony warhammer? Maybe two potions, as a treat. (Potions are the high fantasy equivalent of those science fiction nanites.) But it’s a temporary fix. The thing is, getting brutally murdered all the time doesn’t distract from mortality as much as one might think.

No matter how much fun I’m having getting spat on by spiders and swallowed by dragons, I wonder what choices I’d make differently if I couldn’t reload. The answer is, all of them. I wouldn’t fight a single fucking dragon. I’d be Frodo at the beginning of The Hobbit, except Gandalf couldn’t convince me to do shit. I would neither have adventures nor do anything unexpected, thanks.

That’s not to say that I wouldn’t enjoy living in the province of Skyrim. I just wouldn’t be an adventurer. I’d lie to everyone and say that I took an arrow to the knee, and that’s why I have to stay home in the house I just built. And do you know what I’d do in that house? I’d do something that I have actually been doing in my most recent playthrough.

Skyrim offers a number of properties the player can purchase or build; I have purchased and built them all. In one of my homes, Lakeview Manor, I have a dedicated library. I stash books I find around the world, careful to weed duplicates from my collection. I located an online spreadsheet of every book in Skyrim and am continuing to work towards my goal of catching ’em all. 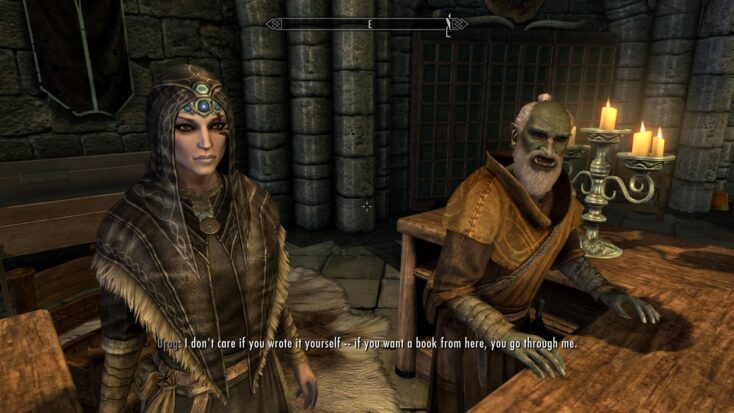 Finding rarer volumes requires some extra effort. My preferred hunting ground is the library at the College of Winterhold, a mages’ academy. Their library is known as the Arcanaeum, or the Ysmir Collective, and their librarian is an Orc named Urag gro-Shub. In the interest of column consistency, and of not personifying libraries themselves, Urag gro-Shub is the character I want to befriend this month (although if I could personify my Skyrim library and befriend it, you know I would).

Complete library sets might not be worth dying for in the corporeal realm. I’ll probably never go on a Ninth Gate-style quest looking for a rare book about the devil (although that’s not off the table – I know I said Gandalf couldn’t convince me to do shit, but Boris Balkan’s bank account might). But in Skyrim, I don’t mind getting murdered a few extra times for that rare copy of Sinderion’s Nirnroot Treatise or the folio edition of Lusty Argonian Maid.

Even though I may not be willing to get killed for literature in real life, I do feel similarly about library curation. This is why I have a master’s degree in library science. The difference in Skyrim is that pursuing my passion didn’t land me in any student loan debt. The other difference is that locating every book in the world is an attainable goal. So I’ll respawn and reorganize until my collection’s complete, dying again and again until I stop thinking about death.

The Joys of Getting Lost in the Myst

Down in the Dungeon