Past a certain budget level and expectation of polish, “friction” becomes a dirty word for game design. Take Scorn, the long-in-development survival horror game sold on its affinity for artists like H.R. Geiger. Polarized reviews and reactions pervaded its initial release period, disdainful of its unexplained puzzles and its clumsy, unsatisfying combat. Navigating the biomechanical terrors of Scorn, in other words, involves friction.

But shouldn’t friction be the point of a survival horror game, much less one set in an alien world that has no dialogue and no friendlies to explain how anything works? Horror derives from uncertainty, desperation, and discomfort, few of which are synonymous with the sort of big-budget games we present as the face of the medium. If anything, Scorn doesn’t go nearly as far as it could have; it still leads us on a linear path with lights to mark the way and white outlines to denote interactive objects.

Where cruder graphics are concerned, however, we tend to be more tolerant. If a game wouldn’t look out of place on the PS1, we are more willing to consider friction as intentional. By using lo-fi graphics, some modern horror games essentially advertise that you’re going to be fighting the camera alongside the monsters, too. Friction becomes a concession, a device we will “put up” with for a game that didn’t have the resources to smooth it out.

In a post-The Last of Us world, perhaps that was Scorn’s mistake: to play in that realm of visual fidelity is to invite comparisons to games that work very hard to shave off any sharp edges. The Resident Evil 4 remake cranks up the detail for more overtly horror-tinged visuals yet strips away some of the original’s mechanical friction, too; now, we can both walk and aim a weapon at the same time, and we can even block the fearsome chainsaw with a knife.

For now, at least, plenty of smaller games carry on the cause. They use friction to make a point, to express frustration and access emotions beyond the limited vocabulary of realism and polish. Disempowerment is something that games feel obligated to prime us for, and the ones that follow do so by adopting eccentric visual styles that signal their place well outside the norm.

In Ducky Elford’s The Passive Voice, we explore the sort of 3-D overworld that wouldn’t look out of place in a platforming collectathon. We spot stone archways from a distance that become portals once activated, and we later scatter the world with hearts that then function as collectibles. 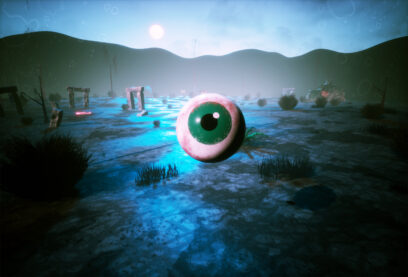 The catch, though, is that we don’t navigate this world as a colorful mascot like a purple dragon or a cartoon Italian. We play as a big eyeball, and an eyeball doesn’t get around so easily without things like bodies or limbs. Using the mouse like a trackball, we roll and bounce the eyeball across barren terrain, ramping off rocks for maximum imprecision. It’s fun for a moment, though it’s also something we must swiftly unlearn because the portals are so narrow that anything but a gingerly crawl will collide with the stone archway instead.

I remember renting Superman 64 from Blockbuster before I’d learned to consult the internet about such monetary commitments. I never made it very far, and my blood pressure still rises a little when I picture the rings it wanted me to fly through in a foggy city. The archways in The Passive Voice demand precision, too, but the rings are different; when I face the rings, I’m playing a superhero. I’m playing the superhero, whose cartoons never suggest that he would ever struggle to accomplish something so simple.

As a disembodied eyeball, though, the struggle makes sense, even without reading the game’s Itch page blurb or entering the portals to trigger non-interactive vignettes that make the themes explicit. The Passive Voice is about living with things like dyslexia and dyspraxia, which demand extra effort to accomplish actions that others take for granted: reading, walking, even navigating a videogame.

That friction, in turn, informs the friction with the game camera that we might have otherwise written off as indie jank. Beyond the ability to adopt an overhead view that makes the eyeball easier to stop, the camera stares straight ahead into the distance  even when we turn around. Even the basic act of exploring and collecting is made more difficult as a result, since many of the hearts lie somewhere behind us, stubbornly invisible until we’ve backtracked far enough to regain a broader view of the area.

In their disorienting quality, the mixed-media visuals reflect this approach by resisting any grounded reference point or tidy metaphor. One vignette features rubber ducks, and another features a hyperreal humanoid in garish colors who speaks in yowls that made me turn down the volume to stop upsetting my cat. A contrasting cartoon face follows each vignette, sketched in earthy pencil shades and speaking in all-caps text that loops until we hit a button that says “I’ve heard enough.”

ME AND MY ELDRITCH PARASITE
Paid (Itch / Steam) | Ape Hardware

The collage style feeds into the unsettling atmosphere of Ape Hardware’s Me and My Eldritch Parasite. Inscrutable shapes, sinister figures, and ordinary appliances litter the foreground and background of its setting, a jumble of hallways and doors called the Eternal Residence. We move through the place in sidescrolling profile, aimlessly shuffling among beings implanted with a protruding, parasitic tentacle just like ours that aches for food and violence. 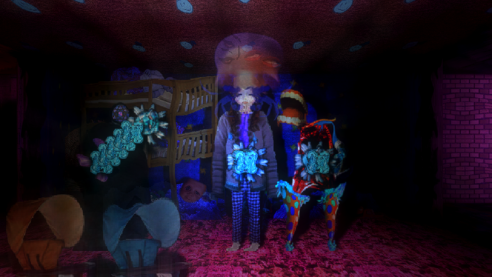 There’s no logic to the randomized layout. We’re meant to search for blue keys that unlock the tools to cut off the parasite, but the keys could be anywhere. Often, they’re held by another wandering resident that we must skulk alongside, waiting. The other residents are most vulnerable while they molt to another form that might be more powerful, more hostile, or more difficult to evade.

And evading is the thing we do most while walking the hallways, like an entire game built around edging through a crowd of people or a cluttered home. The parasite must move separately, so we swap and leave the host body standing still while we stretch the vulnerable tentacle out of harm’s way before switching back. The process is awkward, the natural expression of a consciousness spread thin. Avoiding other parasites is easy enough to remember, but sometimes we need to avoid food, too, because feeding the parasite when it’s full only increases the chance of it flying into an uncontrollable rage. We feel how cumbersome and demanding this thing is, how badly we’d like it gone.

In representing something serene yet noninteractive and thus unattainable, friction can be a little bit sad, too.

Steven Nguyen Scaife is a freelance writer and editor who will not pick a pop culture lane. He and his cat are marooned in Ohio still.

friction, Me and my Eldritch Parasite, Scorn, The Passive Voice, Wake Up