You don’t know why you’re doing this job anymore. You try to remember them: hopes, ambitions, plans. You had them. You have to believe that you had them.

You dimly remember your recruiter: bright smile, pressed suit. When he spoke, he spoke without hesitation. How nice it felt, back then: the approval of a nice man in a clean and well-pressed suit.

You signed the paperwork. You climbed inside the machine.

You don’t know why you’re doing this job anymore.

It’s a lie, but rationally, you know. You have your duty. You have your orders. Everyone else is incompetent; they’re sending children to do an adult’s work; the recruits are getting younger every year. Without you, this place would fall apart. The suits know it. They do know it. You have to believe that they know it.

These people will be the death of you.

Once upon a time, you thought that you could change.

Agent Grey: a comrade who survived the machine. For years, Grey bore the brunt of your anger: your senseless, endless, anger. Instead of backing off (like a normal person would) Grey smiled like a goofy child and called you kind and silly names.

None of them understand.

This is what happens when we don’t follow orders.

Nothing helps. Everything hurts.

You are afraid of dying.

You want to live.

You don’t know how to live.

It hurts. It hurts, and you are tired.

You trace one metal thumb over your orders. Your final orders.

You are Agent Black.

They took away everything from you, but not this. Never this.

They will have to pry this rocket from your cold, dead, metal hands.

When you meet Agent Black for the last time, the world is ending. The climate is fucked; worse, the Almighty is descending from Heaven to judge the sinners who fucked it. You are Robin, a heretical mechanic, dragging God’s Messiah, Royal, to repurpose an escape rocket built by the elites so he can intercede with God and convince Him that humanity is worth saving, actually.

Agent Black is guarding the rocket. She will not let you in.

The Messiah tries to reason:

“This is important! The fate of the world is at stake! This thing is bigger than you!”

THERE HAS NEVER BEEN ANYTHING SMALLER THAN ME

The machine that changed Agent Black is called a Transcender, described in Iconoclasts as “a divine womb”.

One of three things happen to young people who enter a Transcender: they die, they merge with God’s divine blood (called Ivory) to become a Messiah, or an “unintended” third outcome, where they merge partly with the Ivory and gain power, but at a price. 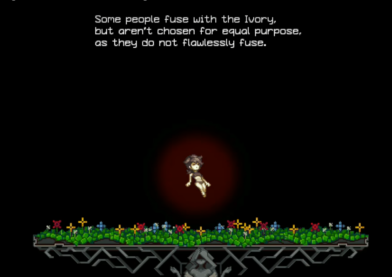 In exploring co-dependence, Pia Mellody describes how childhood trauma impacts an adult’s ability to set boundaries and internalize a sense of worth. Self-worth is something we internalize from our caregivers when they mirror us, esteem us, and nurture us. Boundaries (both internal, towards ourselves, and external, towards others), are something we have to learn how to “do” from our caregivers, and we usually adopt the boundary styles of whoever it was that raised us.

I see Agent Black as someone who was unable to develop a sense of internal worth. Instead of boundaries, Agent Black uses “walls” – a wall of anger and violence – to keep out anyone who threatens to approach her emotionally. In other places, she has no walls at all. Her behavior speaks of someone who, as a little person, was never valued, never made to feel like the center of attention, or even that it was okay to ask for any attention. There was always someone, or something, more important.

As a child who was neglected, Black’s death drives me mad with sorrow.

THE NECESSITY OF GRIEF

There are three gut-punches once Royal and Robin are done killing Agent Black.

1) Her last line is “I will have my life back!”. Agent Black wants to live again – but she wants her old life back, which is impossible.

2) Her real last line is “HEAD…ACHE”, because the game is so cruel as to flatten her death into a gag about her migraines.

3) Despite her never feeling esteemed by the “suits” that order her around, in truth, the suits did value Agent Black. They went so far as to save her a place inside the rocket. If Black had gone inside, perhaps she might have seen it. She didn’t. Now, she never will.

I am disconsolate; I still wake up some days and think of Agent Black. I think about the rocket: “this rocket is me”, she says, slamming her head against it and smashing it clean open as you fight. The rocket, a symbol of potential – one Final Hope for Humanity – that cannot work anymore, because all the people that were supposed to ride it are dead. When Royal – privileged, pampered Royal – tells Black to face reality and accept this, can we blame her when she says no? When she finally says no to something in her life?

To understand, viscerally, that t̶h̶e̶ ̶r̶o̶c̶k̶e̶t̶’s her purpose will never be realized, that i̶t̶ she has failed now: that is too much – much much too much – and her head hurts and she is tired; so very tired.

The process that lets something die is grief.

Aster Shen has returned. Her favorite thing is to tell people who think they’re strong ‘no’ straight to their faces. She has too much identity, too little time, and loves her best friends dearly.

How to Take a Stand // Transpersonal Defiance in JoJo’s Bizarre Adventure: Diamond is Unbreakable