I started my professional career as a pilot. When I graduated from college, I figured that I was done with studying, so I went into what at the time was a rapidly growing industry, aviation. I heard a couple of years later that I was accepted into the best graduate program in the world for my particular subfield of archaeology, so I handed in my wings and headed over to the University of Chicago. You might say that I went from boring holes in the sky to digging ditches in the ground.

With my background in aviation, I decided to specialize in what remains to this day a frontier of science, remote sensing. I know this comes off really technical, but it’s basically the study of aerial photography and satellite imagery. I actually spent several years working at the Oriental Institute just staring at pictures of desert landscapes. The first thing that I learned how to recognize are the huge mounds of dirt known as hoyuks or tells depending on whether you’re talking about Turkey or pretty much any other part of the Near East. These are effectively accumulations of stratified debris from a succession of consecutive settlements, massive piles of building rubble and whatever garbage the locals left behind. The next thing that I learned how to recognize are the ancient roads called hollow ways that branch out from these hoyuks and tells in pretty much every direction. These are completely invisible at ground level, but when seen from above, they look a little bit like spider webs. They connected what were once far flung settlements, meaning that hollow ways were almost certainly used for trade.

When it comes to videogames, trade typically takes the form of a camel or wagon train. Think along the lines of the Civilization franchise. You sign some sort of agreement with another faction that suddenly results in a continuous movement of goods and people. The moment you break the agreement, this immediately disappears, creating the impression that commercial activity takes place without any kind of impact. The reality however is that trade leaves a substantial trace in the material record. Hollow ways for example. I often refer to them as roads, but rather than something purposefully constructed, these were created as people made their way through a given landscape over an extended period of time, trampling over plants and pounding down dirt in the process. There were also trading colonies. While they were sometimes independent settlements, these frequently took the form of urban districts filled with what you might call resident aliens. Turns out that wheeling and dealing makes a mark after all.

Trade was remarkably common back in the Bronze Age. In so far as the Near East is concerned, there were networks connecting practically every significant settlement, but the most remarkable single site was no doubt the city of Kanesh. This was located in what today is part of central Turkey. The settlement flourished between about 1950 and 1750 BCE on account of its close commercial connections to the distant seat of the Assyrian Empire, Assur. Kanesh consisted of an upper city where most of its residents lived and a lower city that was home to a large community of merchants from Assur seeking fame and especially fortune abroad. These merchants lived in Kanesh for periods of time stretching into the decades. We know this because of the letters they wrote. These consisted of clay tablets that were unintentionally fired when the city was burned to the ground, reducing the trading colony or karum to cinders. We’ve managed to recover thousands of these tablets, putting together one of the biggest archives of ancient literature in the process.

The merchants living in Kanesh really got around. We know quite a bit about them because their names turn up not only in the clay tablets found at Kanesh but in letters discovered at sites all around the Near East. They discussed business deals and talked about their troubles, promised payments and complained about their neighbors. These letters are especially important because next to nothing distinguishes the merchants from anyone else in Kanesh. We often think of trading colonies in terms of imperial expansion, but these people weren’t in a particularly privileged position. Kanesh in fact had a king who lived in a gleaming palace at the top of the hoyuk which made up most of the settlement. These merchants on the other hand lived a warren of winding streets and narrow alleys in much the same way as the nearly 30,000 other people in the city. They may have been foreigners in Kanesh, but these people interacted with the locals under fairly normal circumstances, frequently marrying into their families. When it comes to their houses, they were substantial structures made of mudbrick and broad wooden beams, many with a second story. These were mostly oriented towards the interior, consisting of large central courtyards paved with stone surrounded by storage spaces, bedrooms, kitchens and of course libraries. They probably had only a couple windows. 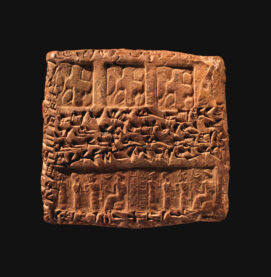 We have a good understanding of the circumstances under which the merchants in Kanesh lived because their letters provide us with a detailed portrait of their commercial activities. These for example reveal that most of them were in the business of exchanging tin and textile for gold and silver, almost all of which made its way back to Assur. The tin and textile may have passed through the city on its way to Kanesh, but these products came from what right now is Iraq and Iran, meaning that Assur was basically a trade hub. These were merchants rather than manufacturers. They bought low and sold high, making use of the mechanisms that most merchants rely on even today, credit for example. They also received economic incentives from the authorities in Kanesh and quite a bit of protection from the king of Assur who not only invested in their commercial activities but also signed a series of treaties on their behalf concerning import duties, caravan security, and loss protection. There were of course no free markets at the time.

Broadly speaking, there was nothing particularly special about the merchants in Kanesh. Assur wasn’t the only place to maintain a network of trading colonies in distant cities. The fact of the matter is that trade was a huge undertaking which left a lasting mark on the landscape in the form of hollow ways, but also transformed cities through the presence of trading colonies. The wheeling and dealing of merchants back in the Bronze Age was a lot more substantial than most of the Civilization games would have you believe. When it comes to the material record at least.

I learned a lot by working at the Oriental Institute. I mean, I’m sure that I learned a lot more by studying, but I still got plenty of practical experience from that job. The most important takeaway in retrospect is that archaeology as a field isn’t just about what’s in the ground. Sometimes you have to look down from on high to really get a handle on how much of an impact a given activity is having. This clearly holds true for the past, but I also think it holds up in the present. Trade for example continues to shape our environment. This time around, the stakes are a lot higher, though. These days, we’re causing climate change instead of just leaving depressions in the desert or a few piles of dirt here and there. You can see all of this damage from space of course. The problem is just that nobody wants to look.

Realism, Reality and the Real