Card Shark doesn’t try to hide that you’re in over your head – instead, it candidly overwhelms you. It constantly advances its tensions, never letting you rest on using the same scam twice. Once you learn a trick, you can practise it as much as you like, but at the table, it’s do-or-die – sometimes literally – and then on to the next variation. People’s lives are discarded just as fluidly.

You end up partnered with notorious thief Comte de Saint-Germain after a cheat goes wrong, and your guardian ends up killed in a heated crossfire. Newly on the run, the Comte suggests that it’s no coincidence that two of you are travelling together – and you’ll later find out that you’re the hidden ace for a gambit much larger than simple card tricks. But of course, most of these card tricks are about manipulating an ace’s position, and the easiest mark is one distracted by believing they’re getting one up on someone else.

Its rising tensions are very real: The life-or-death stakes might be the player character Eugene’s, but the card tricks are in my hands. Pacing a riffle shuffle so I can preserve my stacked cards at the bottom of the deck – without going so slowly that my opponent spots that I’m cheating – is solely between me and the slightest change of pressure on an analogue stick. 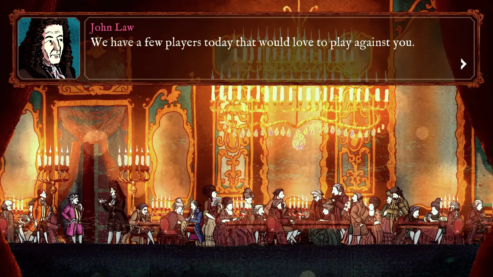 Being able to fumble the card tricks occupies enough of my brain that I don’t have room to try and scrutinize the red thread of conspiracy unraveling before me. I get caught cheating, and sent to jail – twice. At one point I lose all my money and have to hustle on the streets to even be able to place a bet at the next table. I cheat my way up through the ranks of French aristocracy on a knife’s edge.

As you travel from place to place, the Comte will often point out that you might be wondering why – why this next mark, why Switzerland and not France, why return to an old haunt – and even when I notice how sparse and need-to-know the information I get is, I don’t have the wherewithal to object. Tell me where I’m going, sure, but I know you’re about to teach me a new shuffle variation that I’ll need to practice three times over. Too much new information might just push our mnemonics and secret signals out of my brain. 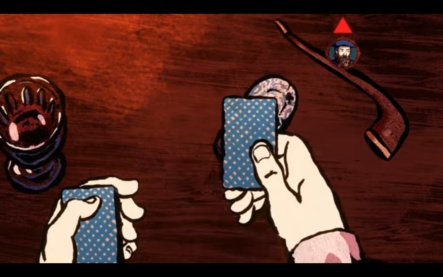 There’s an exchange that happens at a few tables, where your mark, frustrated at your consistent wins, will accuse you of cheating. When pressed to suggest how you cheated, they don’t have any evidence, and have to let it go. I know I’m involved in a con that’s better for my ignorance of the part I play, and that my companions aren’t entirely trustworthy, but my suspicions in Card Shark can’t keep me any safer – they only make the moments the cards fall all the more tense.

“I Hope You Get Shot”: A Tale of Swatting
Previous Post