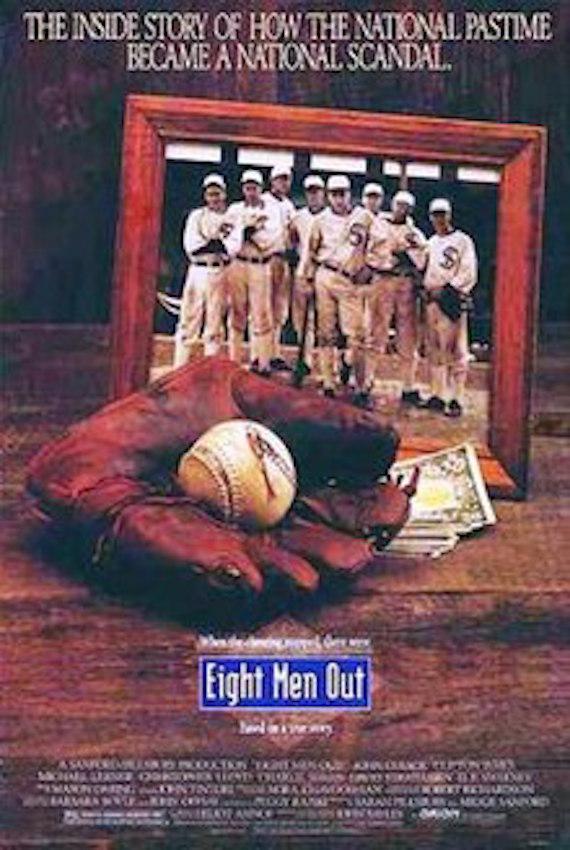 Baseball and cinema go together like peanuts and Cracker Jack. Of all the sports genres, the ball diamond is the most frequently visited playing field by filmmakers. Ask a baseball fan to identify their favorite baseball flick and you’re likely to get as many answers as Gerrit Cole racks up strikeouts. Field Of Dreams always gets a warm embrace. In fact, Kevin Costner is Mr. Baseball Film. His Bull Durham and For The Love Of The Game are other consistent contenders for best baseball film ever.

Others will lean toward Robert Redford and The Natural as the natural choice for top baseball flick. Personally, we’ve always had a soft spot for Pride Of The Yankees, the Lou Gehrig story. Babe Ruth gives a compelling performance in the film as Babe Ruth. Why, you almost believe that it’s actually him (because, of course, it is him). Can you gain an Oscar nomination for portraying yourself?

Still, when push comes to shove, we’ll go with Eight Men Out as the top baseball film ever made. And really, that sad part of this story is that it doesn’t generate more love when the list of the all-time baseball films are compiled. It truly is a shame. And perhaps it’s shame that keeps baseball purists from embracing Eight Men Out. After all, it is the story of how the Chicago White Sox conspired with gamblers to throw the 1919 World Series. In those days, there weren’t any sports betting sites where people could wager on the games. Instead, gambling was done in dark alleys and dank back rooms and conducted by shady characters.

It was these types of folks who convinced the American League champion and heavily-favored White Sox to fix the World Series. These gamblers who were putting the fix in intended to bet big money on the underdog Reds.

Eight Men Out – the story of the eight White Sox players who were banned from baseball for taking money to throw the Fall Classic – is told brilliantly on screen. It really should be embraced by both the film and baseball community and here’s three good reasons why this should be so.

The Black Sox scandal is a vital part of American sports history. It’s the only time that gamblers were able to fix the result of such a major sporting event.

The Story Combines So Many Film Genres

This isn’t merely a sports movie. It’s a biography, telling the tale of an important slice of American history. There’s drama throughout the film.

The gambling angle adds the element of a compelling thriller and there’s also an old-school gangster movie vibe going on. There are funny moments and some great one liners throughout the fim.

How About That Cast?

This was a real breakout role for John Cusack, who is the storyteller per se in his role as White Sox third baseman Buck Weaver. It was a step up from the teenage coming of age stories where he first made his mark and Cusack delivered the goods.

It takes a great team effort to win the World Series and Eight Men Out is blessed with a deep, talented group of actors to tell this tale. A young Charlie Sheen plays second baseman Hap Felsch. D.B. Sweeney is dynamite as Shoeless Joe Jackson. John Mahoney in his pre-Frasier days is manager Kid Gleason. There’s Gordon Clapp in his pre-NYPD Blues days as the victimized Ray Schalk and future Oscar nominee David Strathairn as the troubled Eddie Cicotte.

There are writers playing writers. Novelist Studs Terkel fills the role as Hugh Fullerton, one of the sportswriters who broke the story of the fix being in. Director John Sayles, who’d also go on to be an Oscar nominee, gets in on the action as legendary sportswriter Ring Lardner.

Even the gangsters are real characters – or should that be real character actors? Michael Lerner is suitably scary as Arnold Rothstein, the New York mobster who is the brains behind the scheme. Kevin Tighe, post-Emergency, is bookmaker Sport Sullivan. Christopher Lloyd, post Taxi and Back to The Future, comes through as Bill Burns, the ex-ballplayer who serves as the go-between connecting the gamblers to the White Sox players.

If you haven’t seen Eight Men Out, make like the gamblers in the movie and fix that right away.