Stroll through the streets of Kamurocho in Yakuza 6 and you’ll see all sorts of bright lights and flashy colors. The shops on Shichifuku, Tenkaichi and Pink Streets are pretty good examples of this. They’re completely covered with gaudy signage. These parts of Kamurocho are best experienced at night because they don’t look the same by daylight, though. The sun bleaches them out. The result is a feeling of unease.

Kamurocho is all about pleasure. The bars and restaurants are definitely a whole lot of fun. You can have a drink in Dublin or a meal in Milan without ever leaving Tokyo. You won’t find the same lasting satisfaction in the cabaret clubs and internet cafes, though. These are all well and good until you stop to think about the source of their success. I’m talking about the exploitation of their workers by what are basically just a bunch of gangsters. The bright lights and flashy colors visible at night don’t provide a distraction to the grime under all their glitz and glamor exposed by the light of day.

Shichifuku Street connects the Hotel District and Theater Square to Little Asia. While this part of Kamurocho isn’t exactly crude, the place definitely isn’t classy, either. You’ll come across a bunch of bars and restaurants like Bantam on the corner of Millennium Tower Street. The pub is all about offering you a taste of Ireland, but doesn’t seem to have anything Irish in stock. You can find some cabaret clubs near the same intersection. The information center about a block away is plastered with pictures of the hostesses. These all have garish backlighting in purple and pink. The corner of Theater Avenue is where you’ll see most of the bright lights and flashy colors, though. Explore this part of Kamurocho and you’ll soon be blinded by all of the signage on the gambling halls and gaming arcades. A building that used to be a bowling alley beckons. The place happens to be a fitness center, but the structure still features a sign shaped like a bowling pin. You could say some of the same things about Little Asia. There are more bars and restaurants than gambling halls and gaming arcades, but Theater Square and Little Asia have the same sort of style – both of these places are pretty tasteless. 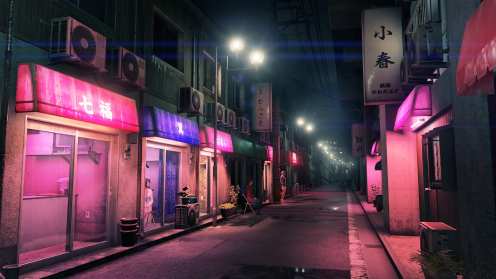 Tenkaichi Street is the gateway to Kamurocho. I mean this literally. The sign at the corner of Showa Street lets you know that you’re entering Kamurocho and it takes the form of a gateway. The sign is pretty hard to miss because it happens to be covered with a bunch of red lights that strobe in a wave pattern. The structures beyond the gateway are even more gaudy and garish. Tenkaichi Street is bathed in a sea of red, yellow and blue light. While some of them are bars and restaurants, this part of Kamurocho is filled with strip clubs, massage parlors and sex shops.  You can have a meal at the Italian restaurant known as Cafe Alps on the corner of Nakamichi and Showa Streets before heading over to Stardust. This was a cabaret club in the past, but in the present it is basically just a den of debauchery. The establishment is hardly tasteful in terms of style. When it comes to class, though, it pales in comparison to most of the other places of exploited sex work, though. Stroll through Tenkaichi Street and you’ll find some pretty bleak buildings.

Pink Street runs between the border of Kamurocho and Little Asia. You’ll come across a gateway on the corner of Showa Street if you roam around the place. This looks a lot like the sign on Tenkaichi Street, but the gateway on Pink Street is shaped like a pair of spread legs. This gives you a pretty good idea of what you’ll come across in this part of Kamurocho. Similar to the signs on Tenkaichi Street, the signage on Pink Street leaves little to the imagination. These are definitely yakuza run brothels. You can find some establishments that look a little bit less illegal, though. I think that Club Shine provides the best example. The cabaret club is all about selling sex, but you won’t see any indication of this on the sign. You just have to know. The same could be said about the internet cafe on Senryo Avenue. Things look perfectly fine until you figure out what goes on behind closed doors.

The shops on Shichifuku, Tenkaichi and Pink Streets might fool you at night, but if you stick around them until sunrise, you’ll pick up on their fraud. The situation isn’t the same in Onomichi, though. The place looks better as opposed to worse during the day. The sun makes it seem even more charming.

Walk around Onomichi and you’ll come across a whole bunch of houses. While some are modern, most of these are traditional. This means that you’ll see a lot of wooden walls and tile roofs. The place is on a slope, so a lot of the structures have stone revetments. You can find a few gardens. The streets between these buildings weave and wind their way around in a way that suggests a lack of planning. I get the impression that most of them have always just been like this. You can take Hilltop Path from Ryunan Shrine to the cemetery on your way to Senkoji Temple. Below both of these buildings on the opposite side of the highway are shops like Snacks and Wildcats that have a bunch of local specialties in stock. Snacks and Wildcats mostly deals in desserts, but you can buy some seafood on Shishido Street. I personally prefer to have a meal at Yonetoku. This restaurant is basically just a hole in the wall, but I think that Yonetoku really captures the character of Onomichi. The establishment couldn’t be any less pretentious. Yonetoku doesn’t have any bright lights or flashy colors because the restaurant has more than enough substance to make up for its lack of style. 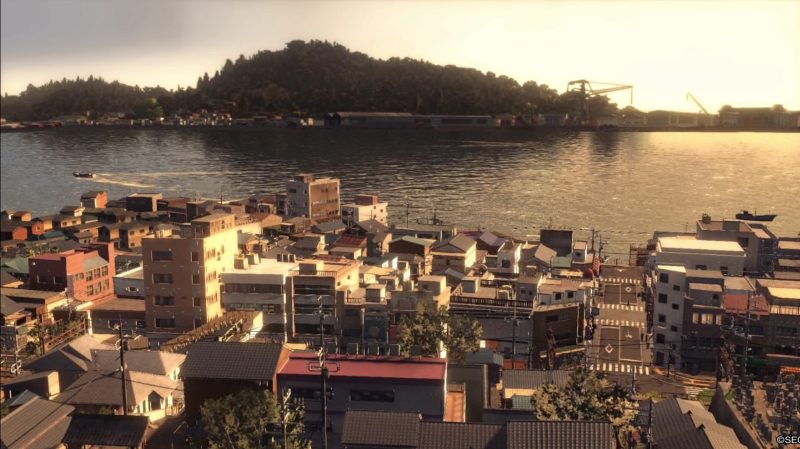 Kamurocho stands in sharp contrast to Onomichi. You have to compare them in the light of day because the shops on Shichifuku, Tenkaichi and Pink Streets divert your attention after dark with all of their bright lights and flashy colors, though. The sun exposes the grime under all of their glitz and glamor. You should always be wary of bright lights and flashy colors. They tend to be hiding something. This would be the criminal exploitation of sex workers when it comes to Kamurocho. The result is a feeling of unease that permeates every part of the place.

The problem with Kamurocho in Yakuza 6 can’t be found in the cabaret clubs and internet cafes. The buildings don’t really matter. The workers definitely aren’t to blame, either. The feeling of unease comes from the gangsters who exploit these people for their own profit. Kamurocho loses every little bit of its charm when you stop to think about the place in these particular terms. Onomichi might not be as big, but it seems pretty nice in comparison.

From Kamurocho, With Love

How She-Ra Helped Me (Seriously)