The game world in Dishonored 2 is filled with parasites. You can see these all over the place. The most obvious example are the bloodflies, but the biggest parasites in Karnaca aren’t actually bugs. They have no wings on their back and only a single pair of legs. They won’t suck your blood, but these parasites can still bleed you dry.

There are two social classes in Karnaca. You’ve got poor people on the one hand and rich people on the other. Workers and capitalists. Producers and profiteers. In other words, you’ve got prey on the one hand and predators on the other. Hosts and parasites. There are people like Mindy Blanchard who struggle to make a living and people like Luca Abele who live by exploiting the labor of other people. How does all of this work? You can trace it all back to the logic of capitalism.

Sociologist Erik Wright said that capitalism has two rules. These are “what you have determines what you get” and “what you have determines what you have to do to get what you get.” The first rule describes how capitalists and workers use what they have to make money. The former use a means of production to create commodities which they can sell at a profit. The latter have only one thing which they can bring to the market. This would be their labor. The second rule describes how capitalists and workers follow a logic of action which is imposed upon them by their position. The former compete with each other by increasing productivity and lowering cost. The latter compete with each other by working harder for less money. The result is that capitalists get more and more money for their commodities, but workers get less and less money for their labor. The rich get richer and the poor get poorer.

The social inequality which you can see in Karnaca is materially manifested in the architecture. Mindy Blanchard peddles potions on the street. Luca Abele holds parties in a palace. Explore the place and you’ll find plenty of poverty, but you’ll come across a lot of wealth, too. The two are often side by side. Stroll through the streets of Karnaca and you’ll go from rags to riches in a matter of minutes. You can see this in three particular parts of the game world: the Aventa, Dust and Palace Districts. 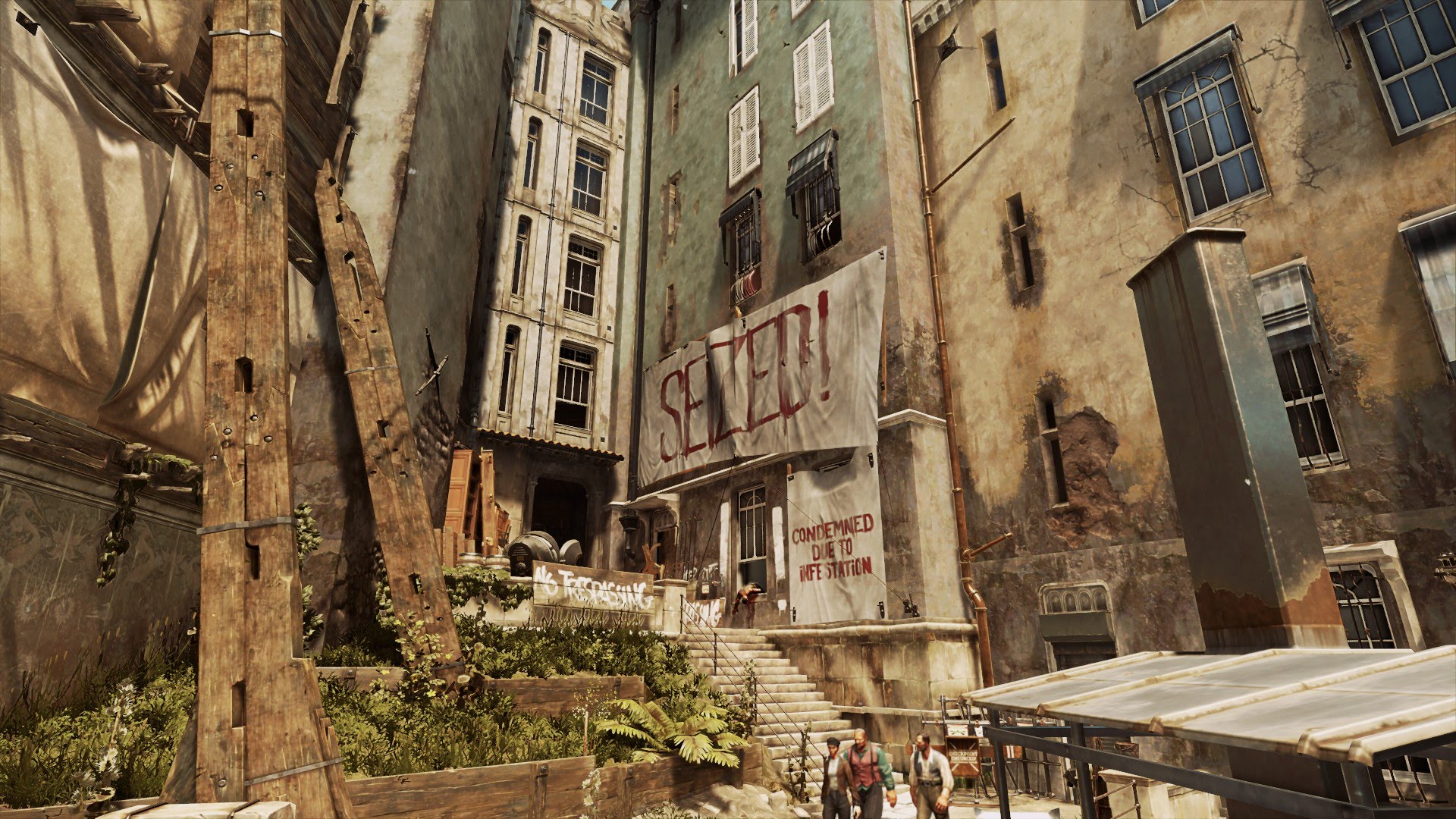 While it isn’t supposed to be the poorest part of Karnaca, the Aventa District is hardly made of money. There are broken windows all over the place. You’ll come across plenty of peeling paint and wilting wallpaper. The signs of water damage in the form of moss and mold are pretty unmistakable. Some of the structures have squatters in them, but many of the buildings in the Aventa District are clearly supposed to be abandoned. They’re filled with all sorts of dirt, dust and debris. There are wooden boards on a lot of the windows and metal sheets on a few of the doors. You can even see coverings on a couple of buildings with “seized” or “keep out” written on them.

Looming large over the Aventa District is the Clockwork Mansion. This belongs to a wealthy inventor by the name of Kirin Jindosh. The structure consists of two stories with decorative stone walls and a curved roof made of metal and glass. Take a look at the Clockwork Mansion from across the chasm that separates it from the Aventa District and you’ll see a separate rotunda which is connected to the main building by a covered bridge. The richness of the exterior is matched by the interior. The place is filled with wonderful woodwork on the ceilings, walls and floors. Hidden mechanisms even allow these to change shape at the push of a button.

Similar to the Clockwork Mansion, the Stilton Manor dominates the Dust District. The structure belongs to a mining baron called Aramis Stilton. This person is apparently popular in Karnaca, but the fact of the matter is that he made his fortune on the backs of his miners. You can tell that a lot of the wealth wound up going into the Stilton Manor. The masonry on the exterior picks up on some of the forms and patterns which appear in the trees, bushes and flowers of the surrounding garden. These are also reflected on the interior. The gentle curves of the crown moldings provide a pretty good example. These resemble a forest canopy. You could say the same thing about the ceiling in the courtyard. The result is a highly refined structure.

The poorest part of Karnaca is apparently the Dust District. This comes through loud and clear in the architecture. You can see squatters in a few of the structures, but most of the buildings look like they’ve been abandoned for a long time. They seem ready to collapse at any moment. Some of them are missing walls on the exterior, so you have to be careful not to slip and fall to your death from a second or third story. This part of Karnaca happens to be on the side of a mountain, too. The interiors aren’t much better. You’ll come across a lot of dust, dirt and debris that have blown down from the mines. There’s plenty of moss and mold, too.

The name definitely suggests wealth, but the Palace District is far from wealthy. The place has plenty of peeling paint and wilting wallpaper. You’ll find bloodflies and rats around every corner. Stroll through the streets of the Palace District and you’ll see all sorts of sprouts and shoots growing between the paving stones. The back alleys are filled with weeds and wild grasses. The walls are covered with graffiti along the lines of “taxes” and “keep out.” Some of them have been seized, so a lot of the buildings are basically empty. They just have a little bit of broken furniture in them. 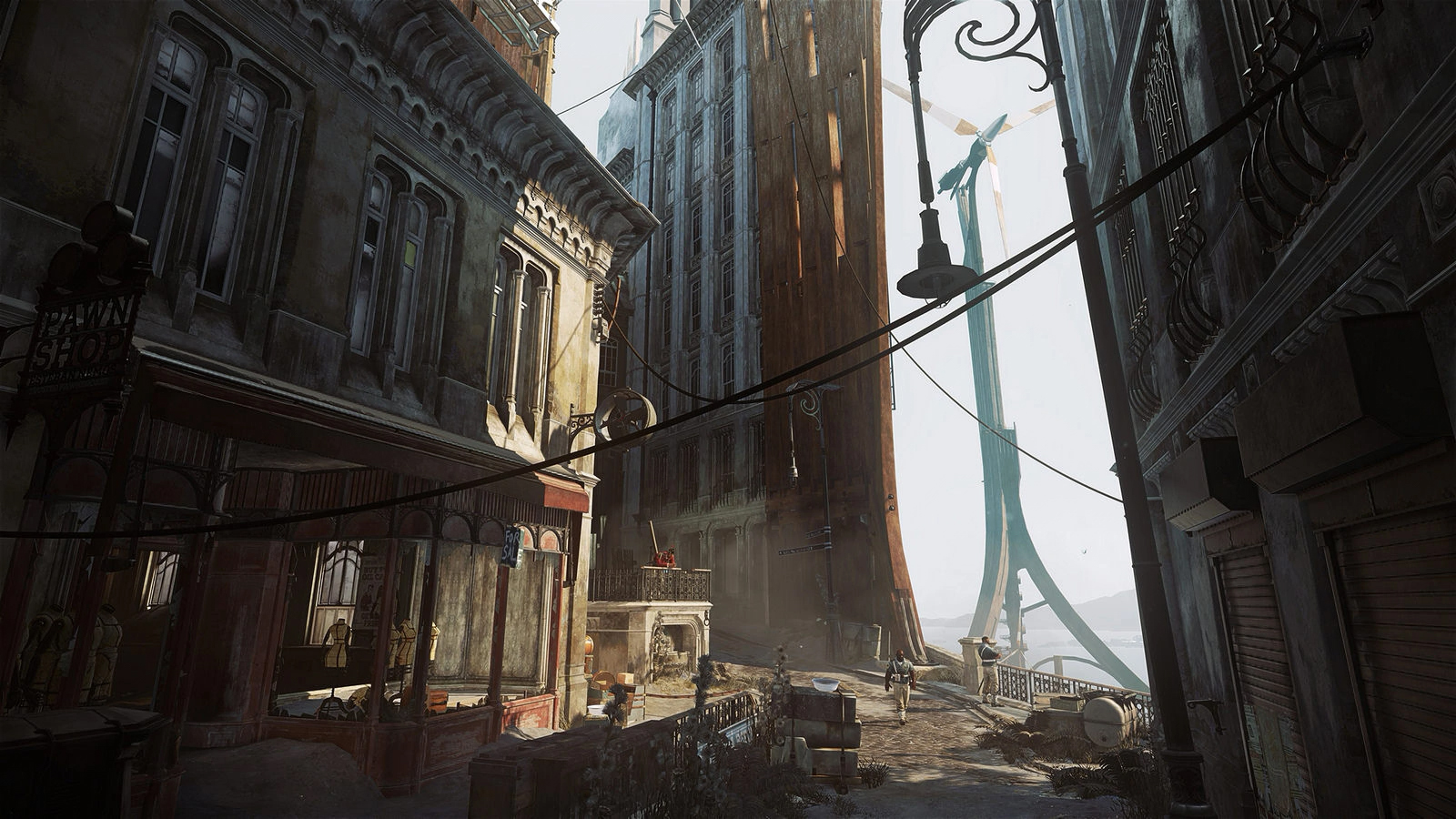 The most beautiful building in Karnaca is definitely the Grand Palace. The structure belongs to the powerful aristocrat, Luca Abele. Similar to the Stilton Manor, the Grand Palace picks up on many of the forms and patterns in the surrounding garden. The source of inspiration is clearly the sea, though. Step into the dining room for example and you’ll feel as though you’ve been swallowed by some sort of sea monster. This part of the building features curved columns which look a lot like ribs. You could say the same thing about the roof beams. The verandas extend outward like tentacles. When you look at the structure from the right spot, the highest floor even looks a little bit like a fin. The design is undeniably sophisticated.

The architecture in Karnaca conveys a strong sense of social inequality. What should you be taking away from all of this? Karnaca is filled with bloodflies, but these aren’t the only parasites in the game world. There are two social classes in Karnaca. You’ve got poor people on the one hand and rich people on the other. Hosts and parasites. The problem is that you could say the same thing about the real world. I think that what you’re supposed to be taking away from Dishonored 2 is a consciousness of the fact that social inequality is all around you and getting worse by the minute. Things aren’t as bad in the real world as they are in the game world, but they definitely could be in the future. The wrongs can’t be made right by somebody like Emily Kaldwin or Corvo Attano, though. This would be where Dishonored 2 runs off the rails in my opinion. They’re from the wrong social class. The only way to solve social inequality is for the hosts to get rid of the parasites. Poor people have to make it happen.

Getting Back to Gunpla

Wookie of the Year