The game world in Breath of the Wild is filled with interesting architecture. Spend enough time in Hyrule and you’ll come across a variety of different structures. Rammed earth is common in Gerudo Town. Rocks are piled up all over the place in Goron City. Stucco seems like the way to go in Hateno Village. Timber framing is apparently traditional in Kakariko Village. Thatching looks customary in Lurelin Village. Wooden posts are popular in Rito Village. Stone predominates in Zora’s Domain. What makes the architecture in these parts of Hyrule so interesting? The answer is that each style is an expression of the society which produced it. The buildings are what you call vernacular architecture.

Take a walk in Tarrey Town and you’ll see something completely different. You have to complete a quest before the place appears, but if you go through all of the right motions, you’ll find a bunch of buildings made from what are basically prefabricated modules. While most of the buildings in Hyrule suit their surrounding landscapes, the structures in Tarrey Town stick out like sore thumbs. They’re definitely an expression of something, but the buildings in Tarrey Town don’t seem to be expressions of any particular society. This would be what you call formal architecture. 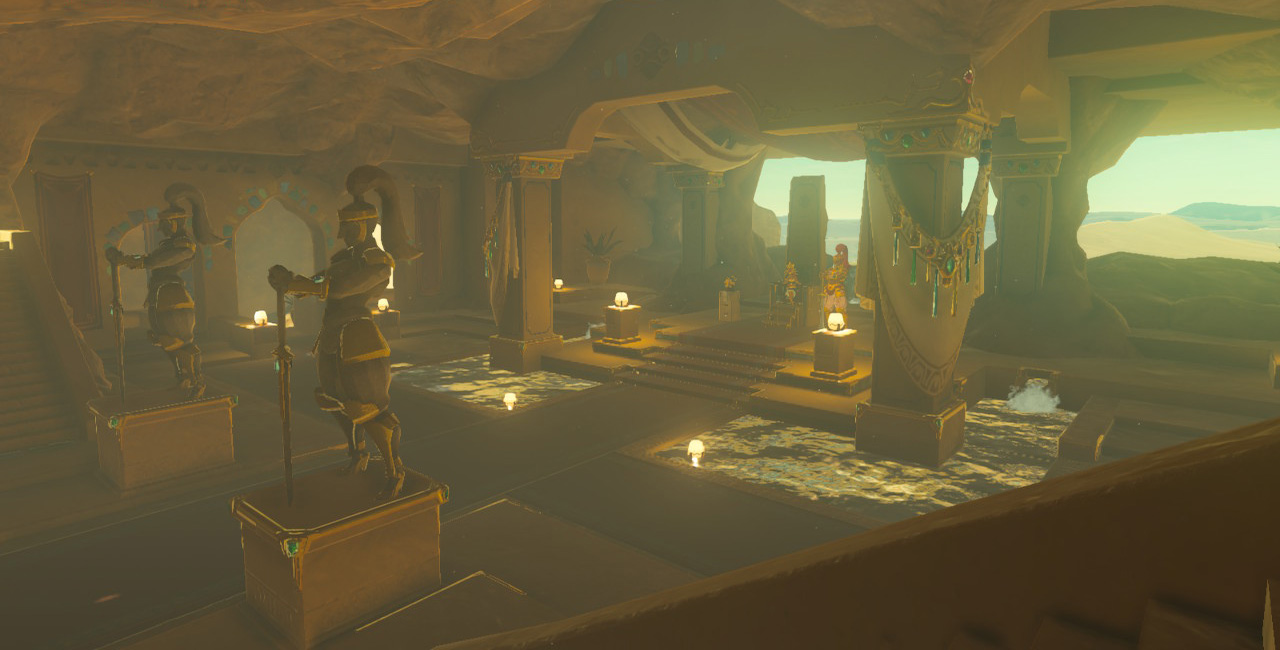 Let’s take some time to talk about the formal and vernacular architecture in Breath of the Wild. The place is filled with the latter, but Hyrule has plenty of the former, too.

Gerudo Town is in the middle of a desert, so the architecture is all about how to beat the heat. The solution to this problem seems to have been open rooms with plenty of pillars to promote the flow of air. The best example would have to be the palace. Walk into the throne room and you’ll soon see what I mean. This part of the palace is basically a hypostyle hall with a bunch of arches in the surrounding walls. The other structures in Gerudo Town consist of open rooms with raised windows or a clerestory. You’ll come across awnings all over the place and even a couple of covered decks. The materials used to make these buildings look like they’ve been sourced from the surrounding landscape. You can see a little bit of stone on the palace, but most of the buildings in Gerudo Town are made from rammed earth which is really just compacted soil or sand.

Similar to the structures in Gerudo Town, the buildings in Goron City are all about beating the heat, but this time in a slightly different sense. The place happens to be right beside an active volcano. Stroll through the streets of Goron City and you’ll find a bunch of bridges crossing streams of hot lava. In terms of architecture, the problem in this particular case appears to have been finding materials capable of withstanding such intense temperatures. The solution seems to have been a reliance on metal and rock. The buildings which you’ll come across in Goron City are basically just boulders that have been piled up all over the place. This resulted in structures that look a lot like domes. The doors and windows have apparently been reinforced with metal posts and beams. Walk into most of these structures and you might start to think that you’re in some kind of cave. 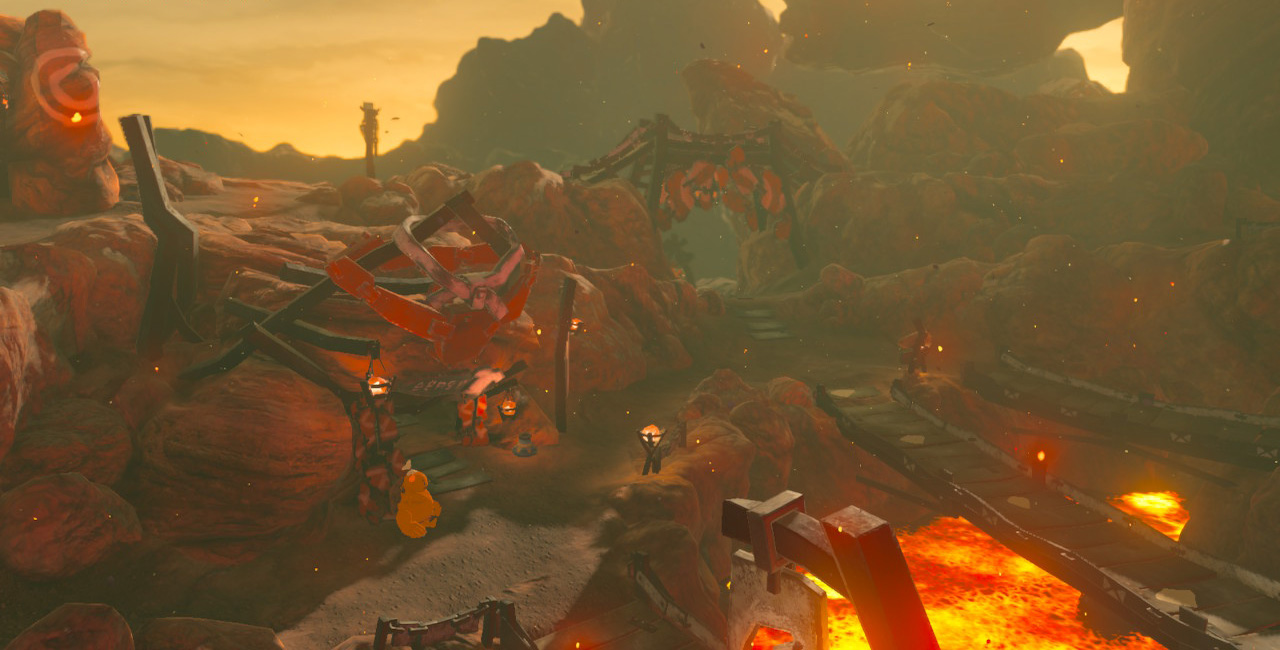 The structures in Hateno Village on the other hand seem like they’re meant to keep out the cold. Since this part of Hyrule is up in the mountains, Hateno Village is supposed to have some problems with snow. The gabled roofs appear to be aimed at preventing the stuff from accumulating in large quantities. They consist of wooden rafters covered with tile shingles. The cold climate would also explain the use of stone. The structures are mostly made from this material. Since they’ve been covered in stucco, you can’t always see the stone, but some of the walls are bare at the base. The cold climate would also explain why most of the structures in Hateno Village have at least one chimney and a fireplace. The partition walls and window shutters also look like they’re meant to maintain a warm temperature on the inside of these buildings.

Kakariko Village has exactly the same problem with humidity. Snow is the main cause of concern in Hateno Village, but the people in Kakariko Village seem a lot more worried about water. This part of Hyrule is definitely supposed to be wet. You’ll find several marshes if you explore the surrounding landscape. When it comes to architecture, this would explain the raised floors and sagging eaves. The buildings in Kakariko Village can only be entered by staircases that lead to platforms which support the actual structures. Most of the roofs reach all the way down to these platforms. Similar to the structures in Gerudo Town, the materials used to make the buildings in Kakariko Village look like they’ve been locally sourced. Timber framing seems to be traditional in Kakariko Village. This involves filling the spaces between wooden posts and beams with a type of material called wattle and daub which is basically just a bunch of mud.

The structures in Lurelin Village look a little bit like the buildings in Kakariko Village. They have the same raised floors and sagging eaves. The reason for this has to do with the weather. These parts of Hyrule are supposed to get a lot more than their fair share of rain. The main difference between them is that Kakariko Village is up in the mountains where the climate is pretty cold. Lurelin Village on the other hand is down on the coast where the temperature is nice and warm. The result was apparently structures with bay windows and curtain doors. The lack of partition walls promotes the flow of air. Similar to Gerudo Town, you’ll see a lot of awnings and covered decks if you take a walk around Lurelin Village. Thatched roofs keep out the rain. Since they’re made from reeds and palms, you might expect these roofs to leak, but thatching is very effective at redirecting the rain. These materials are also easy to come across in coastal regions. 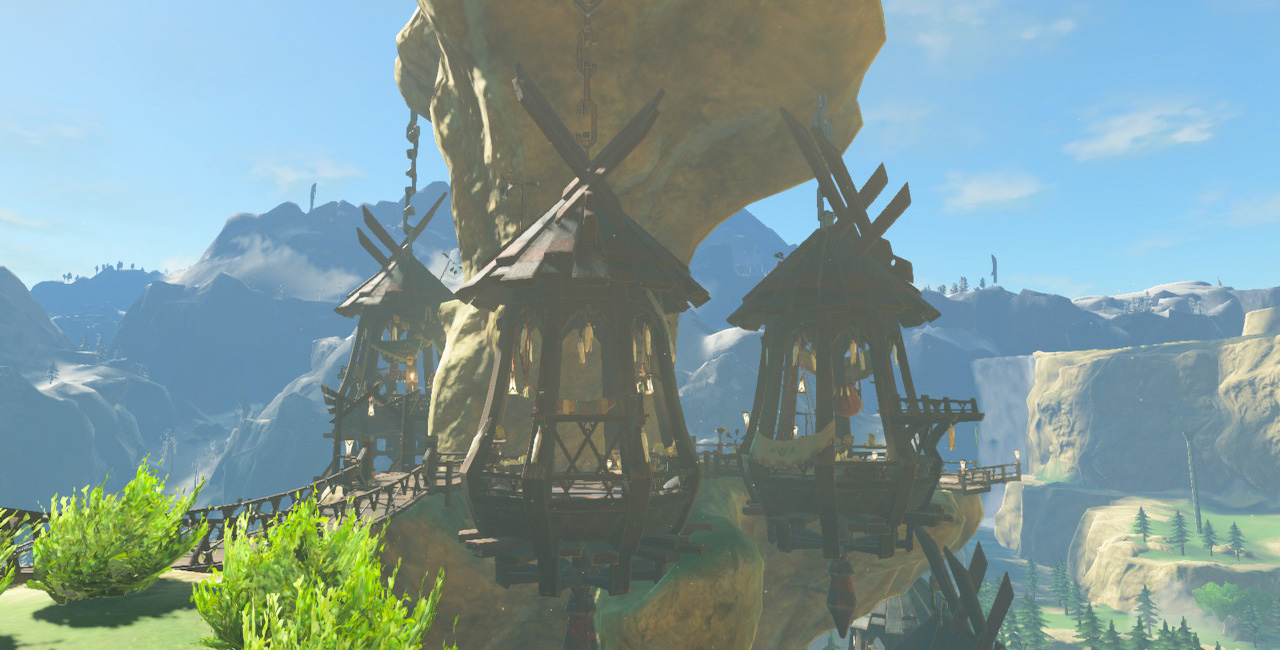 The architecture in Rito Village is really interesting. The structures in this particular part of Hyrule are supposed to have been made by a race of birds called the Rito. These people spend a lot of their time in the air, so the buildings in Rito Village are basically just a bunch of landing pads on the sides of a stone spire. The floors are platforms on top of a truss. The walls consist of nothing more than a couple of posts. The roofs are cones with a clerestory. You’re meant to fly from place to place, but some of the people in Rito Village don’t have the ability, so most of the structures are connected by staircases. The only material which could be used to make the buildings in Rito Village would have to be wood on account of its lightness and strength. Since they live in an alpine region, the Rito have plenty of this particular material.

Similar to the buildings in Rito Village, the structures in Zora’s Domain are supposed to have been made by people who don’t live on land. They were built by a race of fish called the Zora. Since they spend most of their time swimming, the Zora just need somewhere to rest for a while, so the place is nothing more than pools of water atop a series of platforms. Similar to Gerudo Town, the best example of this would have to be the palace. Stroll through the surrounding arcades and you’ll find fountains pretty much all over the place. The water flows into a big basin where the ruler apparently resides. In terms of architecture, the problem in Zora’s Domain seems to have been finding materials that were strong enough to support the platforms without rusting or rotting on account of all the water. The solution was definitely stone. 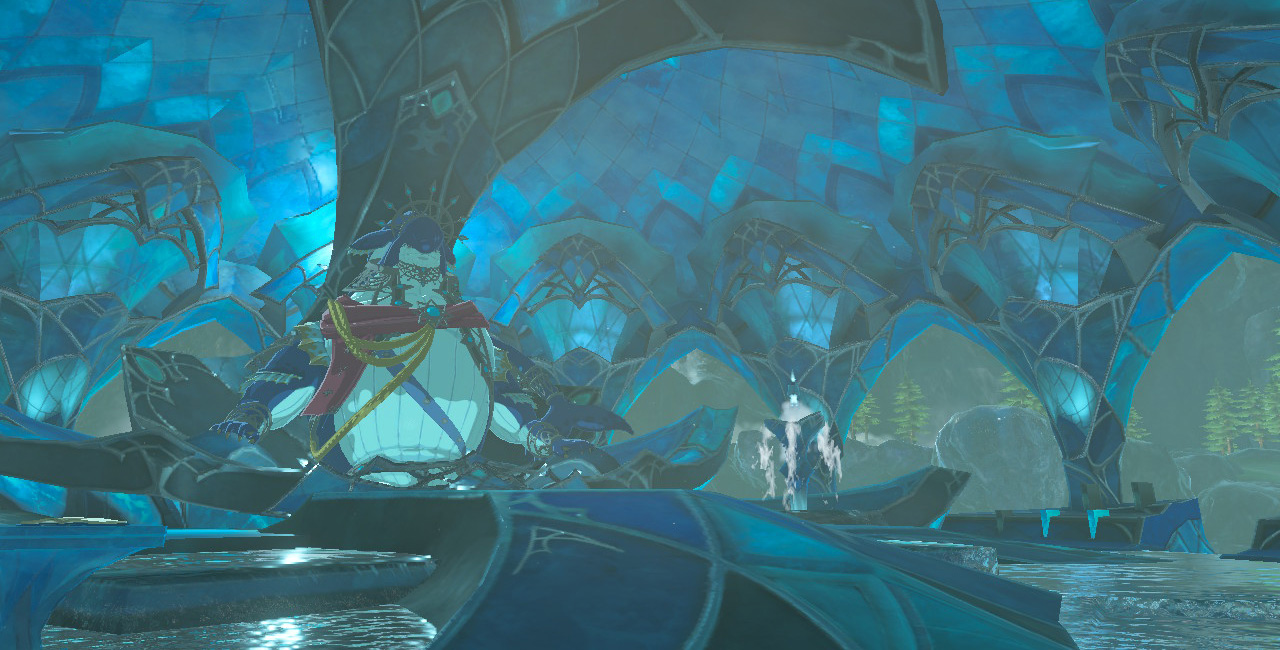 Tarrey Town isn’t like the other parts of Hyrule. The structures are painted to match their surrounding landscape, but everything else about the buildings makes them stick out like sore thumbs. They’re made from what are supposed to be prefabricated modules. While the surrounding landscape is filled with rolling hills and flat plains, the buildings in Tarrey Town are really just clusters of cubes. These are definitely artificial structures. You can see this when it comes to form, but the materials make them seem artificial, too. They’re made from wooden planks held together with metal fittings. The windows look like they’re meant to be made from glass. Since the place happens to be in the middle of a prairie, these materials don’t seem like they could have been locally sourced. You’ll come across a couple of trees, but this highland region is sparsely forested. The trees in this part of Hyrule don’t seem to be of an appropriate species, either. They’re mostly birch as opposed to maple or cedar.

Hyrule is filled with examples of formal and vernacular architecture. Breath of the Wild doesn’t just depict these different types of architecture, though. The game has something to say about them.

Formal architecture is designed based on a bunch of assumptions about how buildings are going to be used. Vernacular architecture on the other hand is the product of an evolutionary process which results in structures being adapted to the needs of their actual users. While you can often identify design oversights with formal architecture, you can’t really do this when it comes to vernacular architecture. Since they’re products of an evolutionary process, these buildings are perfectly suited to the people who inhabit them. They’re tailored to the surrounding landscape. How about we return to the opposition between Modernism and traditional architecture in Japan as an example? Modernism was spread all around the planet after Le Corbusier presented his Plan Voisin in 1925. The problem is that large rooms with concrete floors and glass walls aren’t easy to keep warm in cold climates. They aren’t easy to keep cool in warm climates, either. The result is a reliance on heating and air conditioning. Traditional architecture in Japan on the other hand is just right for the local conditions. You could say the same thing about certain aspects of the design. Modernism and traditional architecture in Japan are both fond of open courtyards. The trick is that people tend to walk straight across these. The former provides no real solution to this problem. The latter turned the courtyard into a garden with a series of cobblestone paths.

The trend has definitely been towards formal architecture over the course of the last several centuries. Vernacular architecture has largely disappeared in the developed parts of the planet like Japan. I think the game world in Breath of the Wild is basically a lamentation over the loss of this vernacular architecture. The game seems to be saying that a lesson of some kind can be learned from studying traditional styles. In my opinion, this mostly has to do with looking at the surrounding landscape to understand how structures can be designed to suit local conditions. The same could be said for the habits of their actual users. People found solutions to their problems in the past. Why should these be ignored in the present?

Breath of the Wild