If I could feel it, the mist would be chilly and damp on my skin. It hangs a low veil over the vegetation of the forest, obscuring much farther than a few clicks in any direction, depriving me of information that might tell me where in the world I am. Lining the thin, potholed road that extends roughly northwest and southeast of me, I see tall needle-bearing trees – pines, spruces probably, others I don’t know even the name of, never mind how to distinguish them from a pine. I seem to be driving on the right-hand side of the road, but there are no signposts or road markings to better orientate me.

I’m almost definitely somewhere in the Northern Hemisphere. It doesn’t feel like the Nordics, but it could be. Most likely would be Canada or somewhere else in the north of the Americas, but I can’t eliminate the Scottish Highlands, northern Japan or Russia. Until recently, I wouldn’t have guessed that northern Japan could have looked like this, but I would now.

I mouse down to the lower right of my screen, to the map part of GeoGuessr’s web interface, and stab at a likely looking patch of green in eastern Canada. I’ve already crawled the arteries of this forest for at least fifteen minutes without finding a useful clue. Whether I haven’t been attentive enough or was just unlucky, it’s time to move on. Beneath the map, there’s a big green button marked “GUESS.” I click on it.

But no. I’m in Russia. I’ve found myself in the miraculous Taiga, part of the world’s largest biome and a boreal forest that stretches in a ring around the northern parts of the Earth. My guess is worth 27 points out of 5000. I stifle a curse word at the miraculous Taiga, tell Spotify to line up a more relaxing playlist and move onto Round 2. 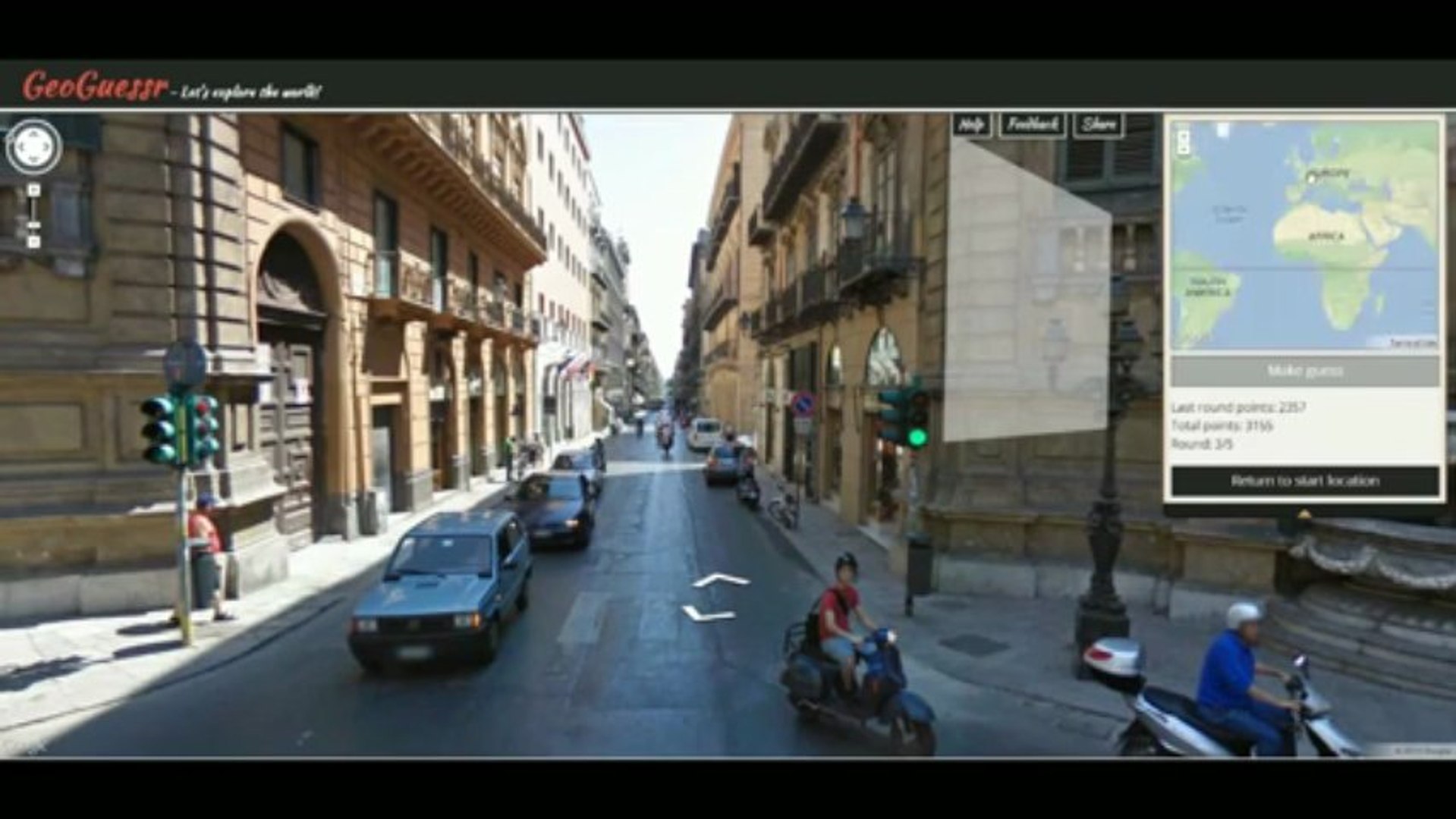 The GeoGuessr formula has remained pretty static since the game was first released in 2013 (besides a controversial move to a paywall model that allows one free play on the premium maps per day). Five rounds of exploration, players being placed semi-randomly across the world using Google Street View and one chance to guess where they are. It might be Thailand, Iceland or Turkey, an alpine tundra, the red sands of the Paracas National reserve or a misty backwoods somewhere north of Veliky Novgorod. It’s a formula that’s more relevant than ever in a world of straightened horizons, when even leaving the house seems an unnecessary risk.

Round 2 finds me on a grass-fringed coastal road that meanders around towards a lighthouse. Just visible beyond that is some kind of populated area. Maybe a harbor. Rocks hang over the road above me, chicken wire holding them in place. My girlfriend peers over my shoulder at the screen. We make our way toward civilization and the lighthouse.

Music streaming services aside, the average experience of GeoGuessr is almost soundless, soundtracked only by the rhythmic clacking of my mouse or keyboard as I pass through ephemeral, often breathtaking landscapes frozen for forever by a passing Google Street View car – pass through, scrutinize and dismiss as pointlessly lacking in useful information.

“There!” The only other noise tends to be the excitement generated by a potential clue on the back of a blurry car or a web address on an advertisement. In this case, it’s a largely unassuming road sign.

Around the lighthouse, we could only find posters with what looked like Japanese characters, but, on past it, our roadway intersected with a highway. The signs suspended over that second road are glossed with the Roman alphabet and the number of the highway itself isn’t far away.

“That’s it!” I bring up the map again and, for a few seconds, Spotify is drowned out. “I see it. That’s the road! South! South! That must be the lighthouse.” 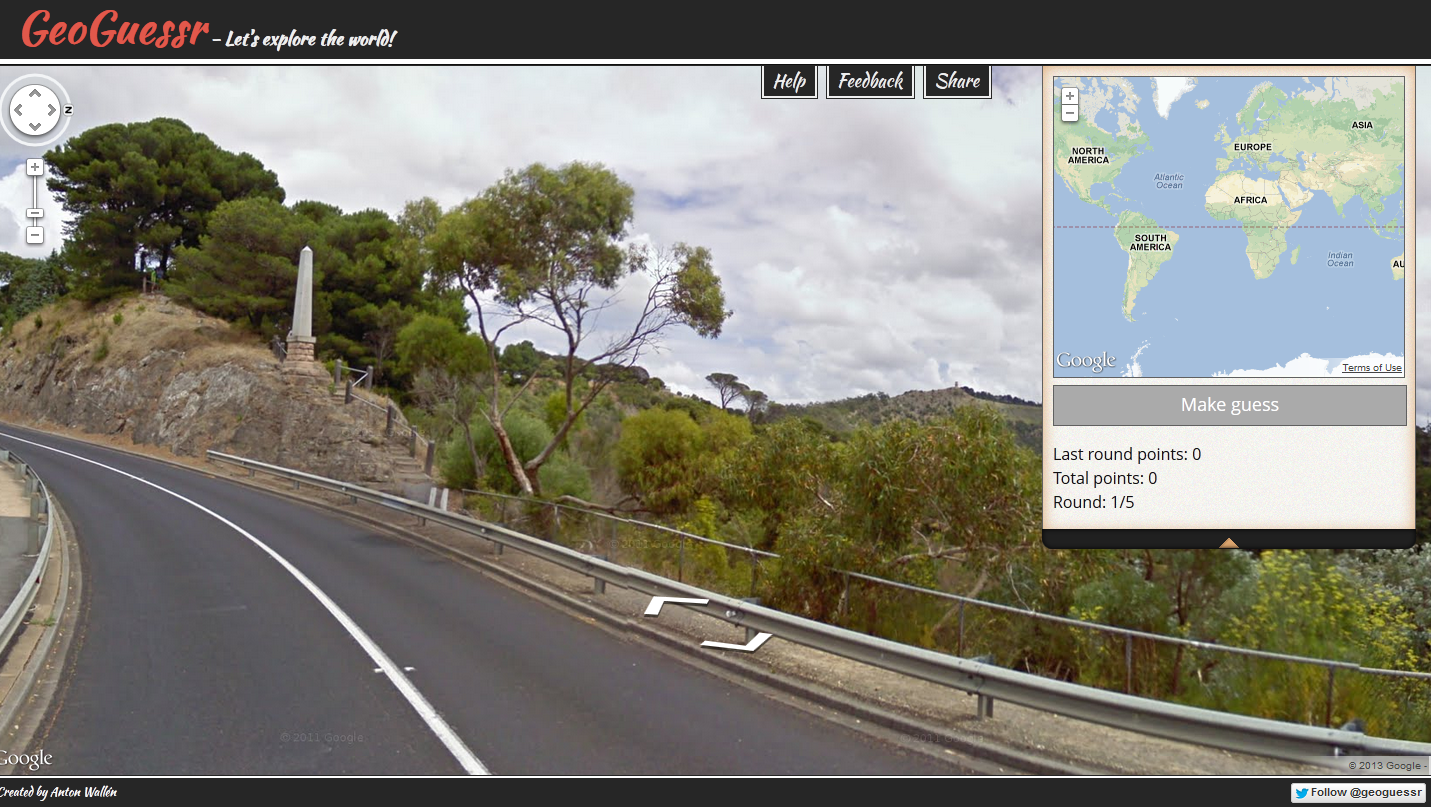 We start at a crossroads in an urbanizing area, hard-packed brown earth strewn to the horizon with half-constructed buildings and heavy machinery. My girlfriend is in control this time, in a chair she has pulled up beside mine. Our initial probing expeditions away from our starting point are abortive, leading only to signs in a language I don’t recognize, often in a script I can’t read. One does show an icon that could be for a hospital.

Beginning to despair, we make our way eastwards, clicking up a short slope and towards a gated compound with all the hallmarks of being an expensive school. Above its gates hang three flags. This is information that we should be able to use; it would be a moment of triumph if either of us could confidently identify more than ten of the flags of the world.

The day looks dry and humid. We guess (correctly) that we are somewhere to the south of the Mediterranean Sea. The flag looks to us like it might come from North Africa. Maybe Algeria. Probably Tunisia? We opt for Douz, a town in central Tunisia popularly known as the ultimate palm oasis. We locate a hospital near a crossroads, press the long green button again and smile at one another.

The smiles, already slim and hesitant, disappear. We are just south of the Jordanian town of Adir, some 1500 miles away.

“Not again,” says my girlfriend. “We really need to learn the Cyrillic alphabet.”

For us (and alongside clues related to flags), non-Roman scripts are GeoGuessr on hard mode, and Cyrillic comes up quite a bit. Slavic-speaking countries have a lot of roads. This round has the added twist that we’ve found ourselves, by a quirk of the Google Street View system, inside a Belarusian pizzeria.

We can move one step forwards and one step to the right, we can gaze out the large windows past around the colorful red and gold print of the restaurant’s name, but we can’t leave the building.

“This could all be so easy.” It’s not my girlfriend’s voice. It’s my phone in my pocket whispering to me. I find my fingers moving towards it, and slap that hand away with the other. My girlfriend gives me a curious look.

“This would be so much easier if we just Googled the restaurant,” I say.

She nods, slowly, sympathetically. “But we’re not filthy disgusting cheaters, are we? Declan?”

We find menus, posters, signage outside, all of it in a resolution that isn’t quite high enough to read. We lean forwards towards the computer’s screen, squinting so tightly that our cheekbones almost meet our foreheads. A location on a theater poster is almost legible. Despite the Belarusian alphabet, we can make out enough to think we could recognize the name on a map. We hope the town is big enough that it will stand out on Google Maps without having to zoom all the way in.

We guess. We find a town with letters that might translate to the poorly rendered image on my screen, and we guess.

Our gamble pays off. We haven’t actually found the right town but one with a similar name – luckily it’s only 10 miles away. 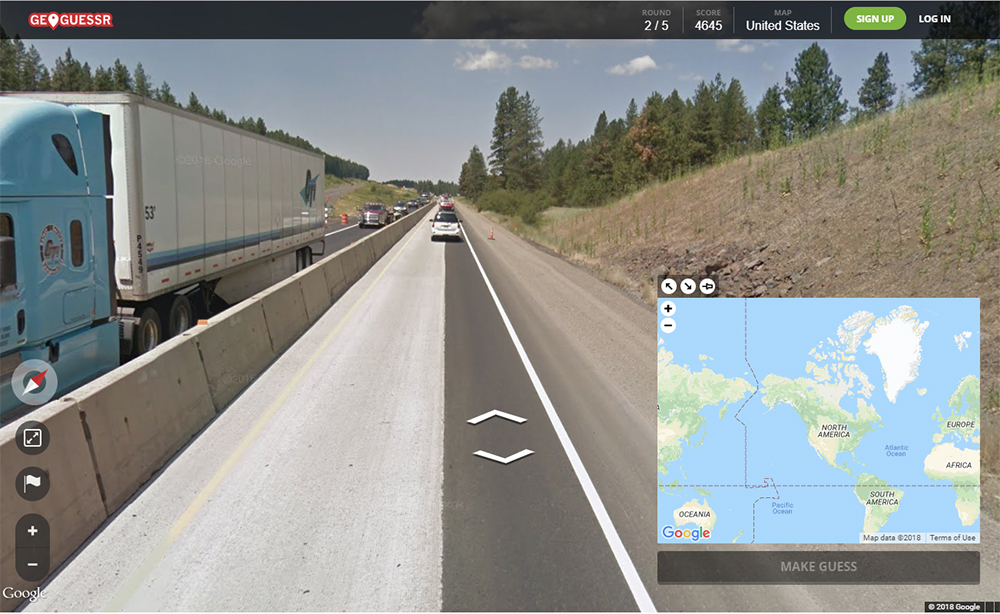 A tall white wooden house is set back from the road. Flat, golden fields stretch away behind it towards infinity. There are only two other distinguishing features to the landscape, erected beside one another on the house’s lawn. The first is a flag on a tall pole; the other is a reproduction of an Ancient Greek statue. Someone has placed a tricorne hat on the statue’s head.

Even though we don’t live there, we instantly know where we are. This flag has done enough successful self-promotion that we actually recognize it.

This is the United States of America.

This place is distinctive anyway, it’s so flat and from the sight of field after field of corn. But the US often makes guessing easy, throwing up flags on every corner, as if the country’s mother was worried that it would forget one of its states at school after P.E. unless she put its name on everything.

Other parts of the States are harder to guess – richer and more complex in their markers of culture and identity, less obvious in their geography, skimpier in the quantity of road signs. Yet those places are no richer or more complex than, say, parts of Canada or Wales, Norway or Russia, Jordan or Tunisia.

Different regions have their own shorthand: the side of the road used for driving, the color of signage, the languages and how they’re written. Nevertheless, immediately recognizing a location is a rare experience, when so many communities across the world refuse to be constrained to a single unvarying identity, the city of Wagga Wagga butting up against Old Man Creek, Stewartstown with Crockballaghnagrooma. Sometimes – too often – that process reflects histories and geographies that were and can remain troubling, the conscious or unconscious imposition of one identity on another.

Five rounds of GeoGuessr can yield sights from the incredible to the mundane, from faux-Hellenic sculptures and Belarusian pizza restaurants to forest parks in which a watchful player might chance on a man defecating by his car. Yet the game’s discoveries are rarely limited to the scatological, visual or even geographic. It reflects an unstable planet, changing communities and cultures, connection as well as conflict, the great advancements and failures of the human species.