I remember watching Rex from the 1991 TV movie Adventures in Dinosaur City as a kid. On the video’s box art, he was a T-Rex in a leather jacket, sunglasses and sneakers. In the actual film, he had darker scales, a row of spikes and a different jacket. I remember him looking cool and speaking with a neat voice, getting into fights, showing kindness, dealing with family heartache and expressing his feelings whenever I watched the movie. I adored him.

Years later I would learn the movie was poorly received. After viewing some old clips on YouTube, I could see why. I doubt I could rewatch it and find it to be a piece of media that actually holds up, or something even better, now that I’m older. But I still have fond memories of Rex, and rewatching some of his scenes still left me feeling for him and his family issues. He was the only reason I ever watched the movie and I’m still inclined to think he’s the best part of it; but Adventures in Dinosaur City is just one example of dinosaurs generally ruling a lot of the ‘90s, with Jurassic Park essentially and deservedly reigning over them all.

While not a T-Rex, velociraptor Robert Raptorson with his letterman jacket and backwards cap in Rocket Adrift’s Raptor Boyfriend: A High School Romance reminded me fondly of Rex and his various jackets. Scheduled to launch later this year, Raptor Boyfriend shows promise of being an evolved take on that particular ‘90s aesthetic, and much more.

The eponymous Robert is one out of three romance options for shy teenager Stella when she moves to a small town of cryptids during the ‘90s. She can choose to pursue dating Taylor, her childhood friend and Sasquatch. Or Stella can go out with Day, an artist and a fairy (literally) haunted by the ghost of her ex-girlfriend.

“I was happy to have a ghost,” says Titus McNally, lead programmer and UI/UX designer at Rocket Adrift. He adds that this ghostly side character is an example of the metaphorical treatment cryptids will receive in Raptor Boyfriend.

McNally works with character artist and programmer Lindsay Rollins, along with composer and background artist Pat Smith. All three of them make up the Toronto-based Rocket Adrift, and they all share writing duties on their projects. 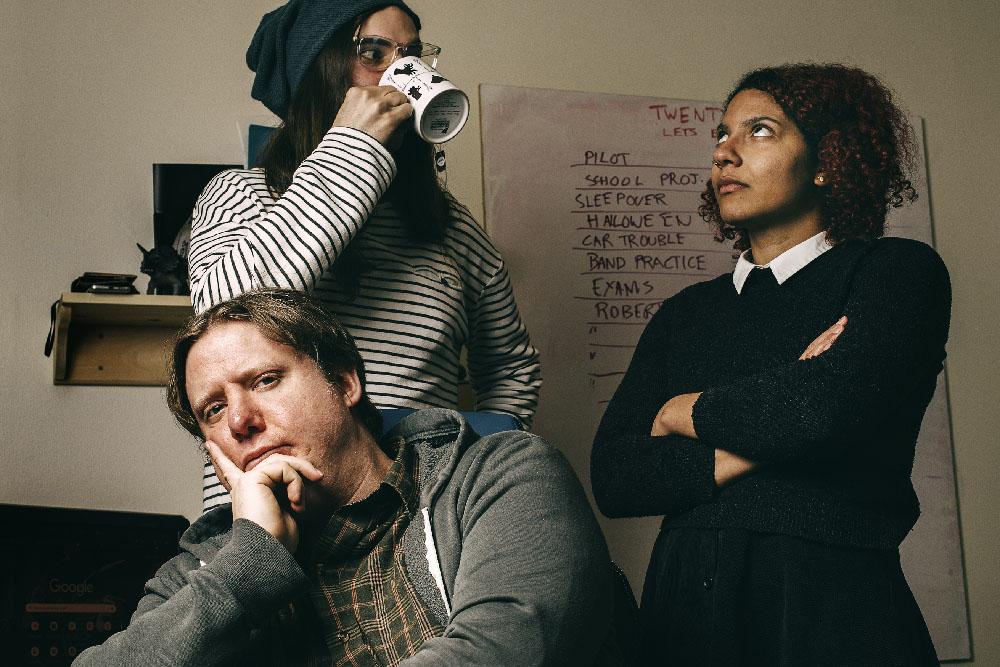 Though their first released game is the surreal Order a Pizza: A Visual Novel, Raptor Boyfriend was in development before that title launched last year as a submission to NaNoRenO 2019. According to Smith, Raptor Boyfriend also wasn’t always going to be a game – it was originally meant to be an animated project on YouTube.

While Rocket Adrift previously produced an animated show on YouTube, the team eventually abandoned the platform.

“It didn’t really allow for us to get into deeper narratives or allow animated content that people could spend a lot of time with, because of the constraints of us producing [projects] as a three-person team, and also what YouTube kind of expects – it’s always gonna be kind of like short-form skits and one-minute animated videos,” Rollins explains over an online call. “And part of the reason we moved to game development was because we realized we could write one big thing that people can spend hours with.” 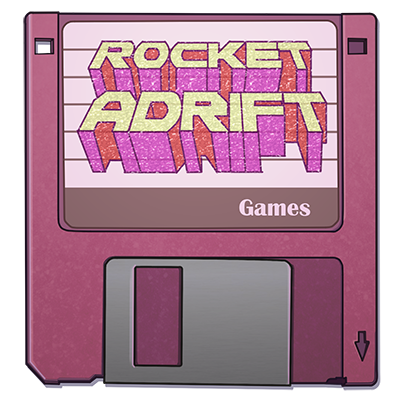 Smith also feels the indie game community was more encouraging of new ideas and less homogeneous than other forms of media.

“When we were getting tired and disheartened with making cartoons, I had just played a couple of games that really kind of made me think ‘this is the place where really exciting things are being made,’” McNally says. “I just sort of had that feeling, ‘We should be doing this.’”

Besides providing the title of the game, the concept of dating a raptor was the idea that sparked the whole thing.

“It was just our joke on a Twilight parody that we came up with,” McNally says. “If we pinpoint what our kind of process is, it’s that we come up with a dumb joke and then we take it really seriously. We try to inject it with real drama.”

Similar to their Order a Pizza, Rocket Adrift is focused on balancing genuine absurdity with genuine emotion in Raptor Boyfriend as they try to create a ‘90s teen drama filled with cryptids.

“I always love to imagine what their social profile would look like,” Rollins says when describing how the team approaches adding emotional depth to characters built on absurd premises. “If they were to have a MySpace page or something, what would be the theme of it, what music would they be listening to, what clothes do they like to wear – all those kinds of things that teenagers basically build their identity on.”

“Don’t be absurdist when it comes to their personal story. You can make raptor jokes about how he’s gonna have a feathery beard when he’s older, and that kind of stuff,” Smith says. “But don’t make the joke out of his personal struggle. You kinda have to find the places where it’s appropriate to be absurd, and try not to mix that too deeply in the personal.”

Rollins shares that the team enjoys a lot of media with absurd elements. The enduring popularity of the sublimely bizarre Adventure Time and the critical reception it received definitely emphasizes her point.

“There’s a lot of interesting things you can do when something gets just absurd,” Smith says. “You can use that absurdist nature to tell like a real story, and have deep moments and themes that really resonate, but you don’t have to do it in the traditional way.” 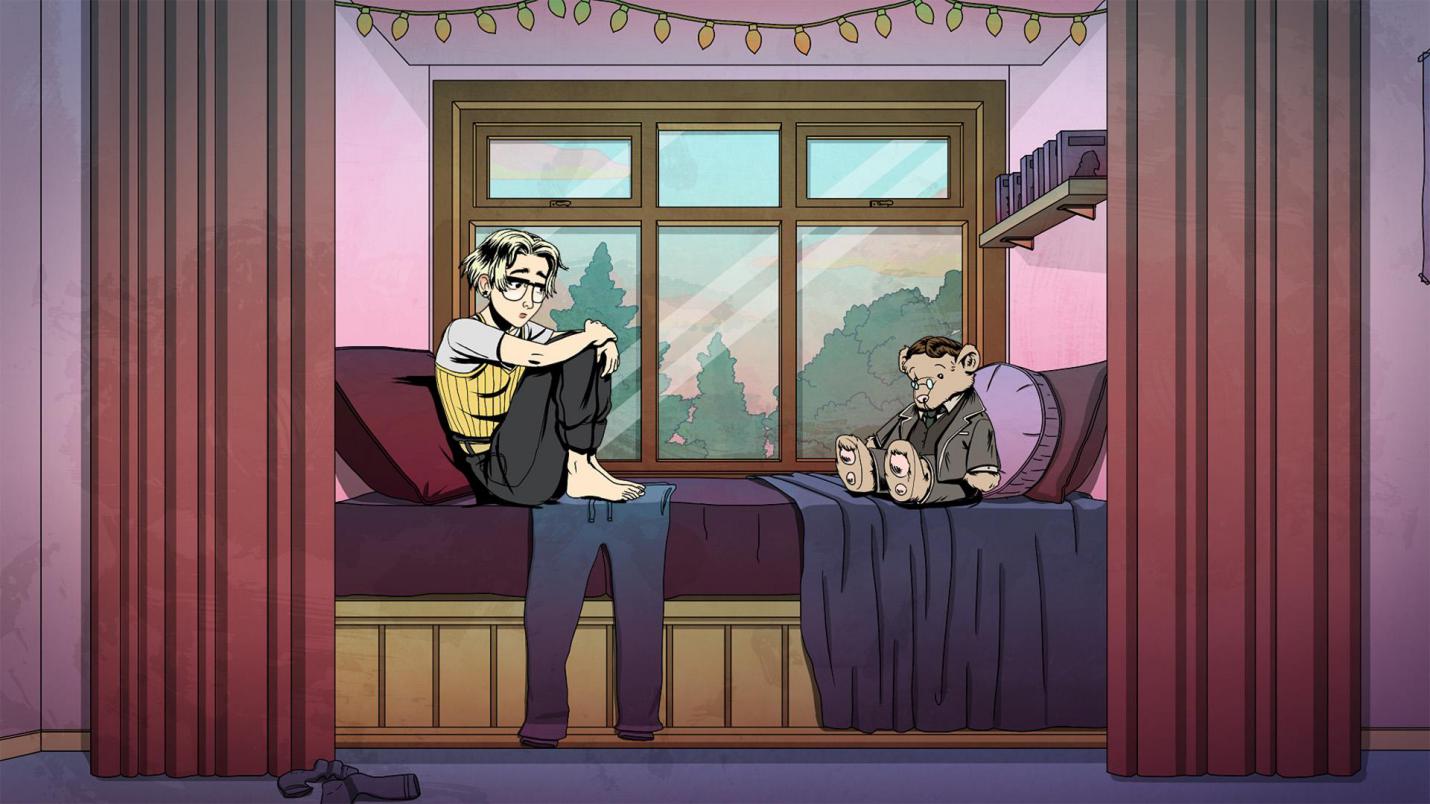 “I personally really like [absurdity] because it kind of changes your frame of reference,” McNally says. “Sometimes when you see dramatic things in the real world – I think they can be really effective, but you can also bring kind of your own baggage with that. Sometimes having something be really absurd kind of recontextualizes it and makes you look at it in a different way, [something that] maybe you wouldn’t allow yourself to [do] if it was too realistic.”

Smith muses that it feels like a very modern style of storytelling.

“I don’t know what it is, if it’s reflective of the times that we’re in, or if it’s reflective of just how media has kind of become absurd,” Smith says. “Like Sonic, for example. Sonic is such an absurd character at this point, but we all still have to experience Sonic, whether we want to or not.” 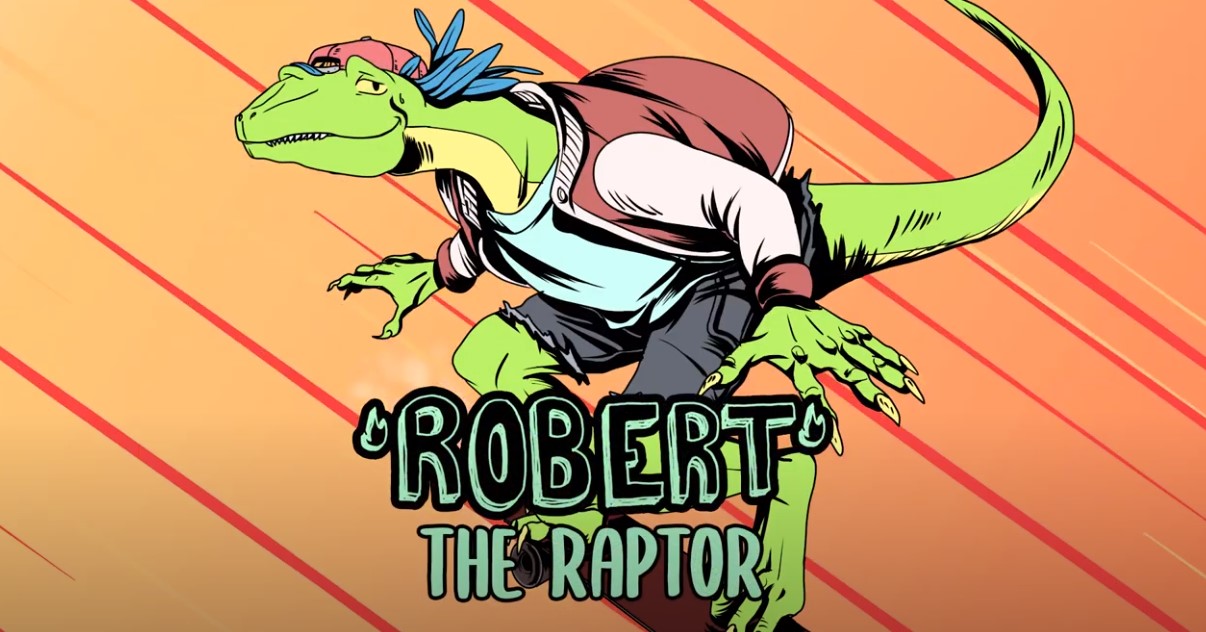 Sonic is a fitting example, given that he’s another ‘90s creation. While being developed today, Raptor Boyfriend is rooted in that era. But how ‘90s is it anyway?

“We strictly took all their fashion sense from the ‘90s, all their design philosophies from the ‘90s,” Rollins says. Rocket Adrift also used slang from that time, and listened to McNally, who grew up in the ‘90s.

“We didn’t want it to be that kind of ‘90s aesthetic that you see immediately in Google Image search. We wanted it to be kind of a more genuine ‘90s experience of what you would have growing up as a teen in a small town,” McNally says. “And the thing I think we really wanted was the idea of teens talking on the phone and hanging out after school, and the ‘90s really helped create that.”

While the idea of dating a raptor was soon followed by the option to go out with a Sasquatch, Rocket Adrift shares that courting a fairy hadn’t always been in the cards. The game wasn’t always so heavily populated with cryptids either.

“[But] it got to the point where we were like, ‘Why wouldn’t Day be a romanceable option?’ Originally she was just gonna be like a best friend character to Stella,” Rollins says. “Then we were kind of trying to spitball ideas as to how to bring her in line with the other characters in terms of mystical characteristics. ‘Oh, should she be cryptid as well?’ We were spitballing ideas like, ‘What if Day is a witch, or like what if Day is a mermaid or something?’ And we landed on fairy.”

“We just expanded it from there,” Smith adds. “Other characters became cryptid; there’s more cryptids within the town [outside of the game’s romance options].”

“That’s really how the cryptid thing came together, through Day,” Rollins says.

McNally adds that this new emphasis on cryptids helped turn the game’s setting into an isolated town “where these fantastical, magical creatures could live.” 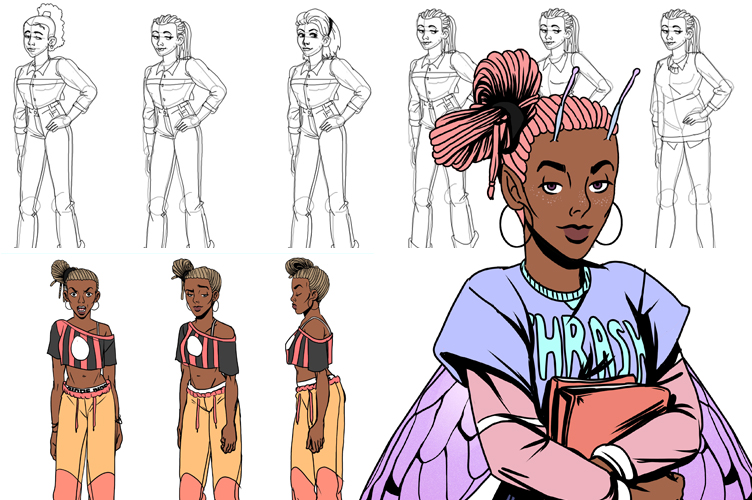 It also helped complete Day’s design. Rollins explains that Day was originally a human, and designing her was a difficult process.

“She started off as just like a regular person, and I just couldn’t get the right outfit and right colors for her,” Rollins says. “But then as soon as she became a fae, I was like, ‘Oh, I get it, her color palette can just be like pastel, like magical fairies.’”

But Rollins also pushed the fairy aesthetic in different ways. While Smith originally imagined butterfly wings for Day, Rollins thought of another insect, and gave the character dragonfly wings.

The visuals for both Day and Stella also helped refine the design of the game’s other characters. 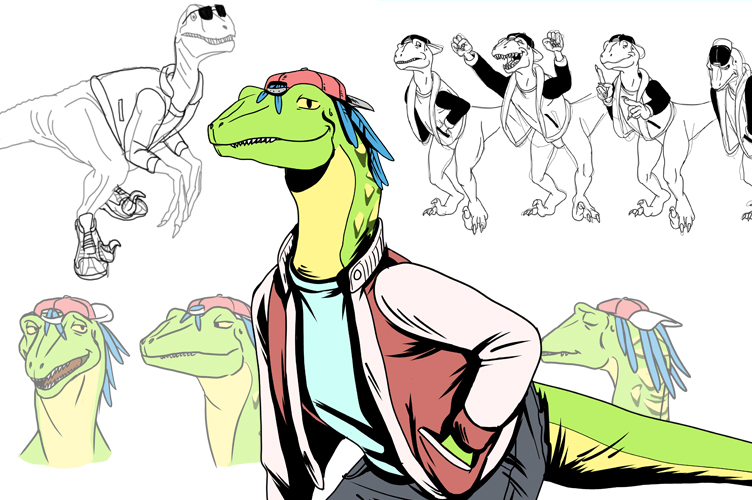 “It started where we just took the image of a raptor – a velociraptor – and put him in a letterman jacket,” Rollins says. “It was funny, but we had a hard time imagining it being a romantic and serious story at that point, because it was just like a meme.”

By redesigning the raptor and other characters to better match the general style used for Day and Stella, the game’s aesthetics became more unified and met the satisfaction of Rocket Adrift.

“The most challenging thing I remember [having to do] as the character artist is try to make a raptor look like a teenager, like a hot teenage boy. It was like the hardest thing I ever had to do,” Rollins says. “I’m pretty proud of the raptor design, to be honest.”

The final design for the character shows a nice distillation and reflection of the ‘90s, as well as an evolution of it. He’s largely the cool-looking, scientifically inaccurate scaly raptor popularized in the iconic Jurassic Park. But feathers poke out from under his cap, pointing to today’s updated scientific knowledge about dinosaurs and birds. Besides demonstrating that a dinosaur can still look good with feathers, it also shows an acknowledgment of today’s present mixing with visions of the past to create something new. 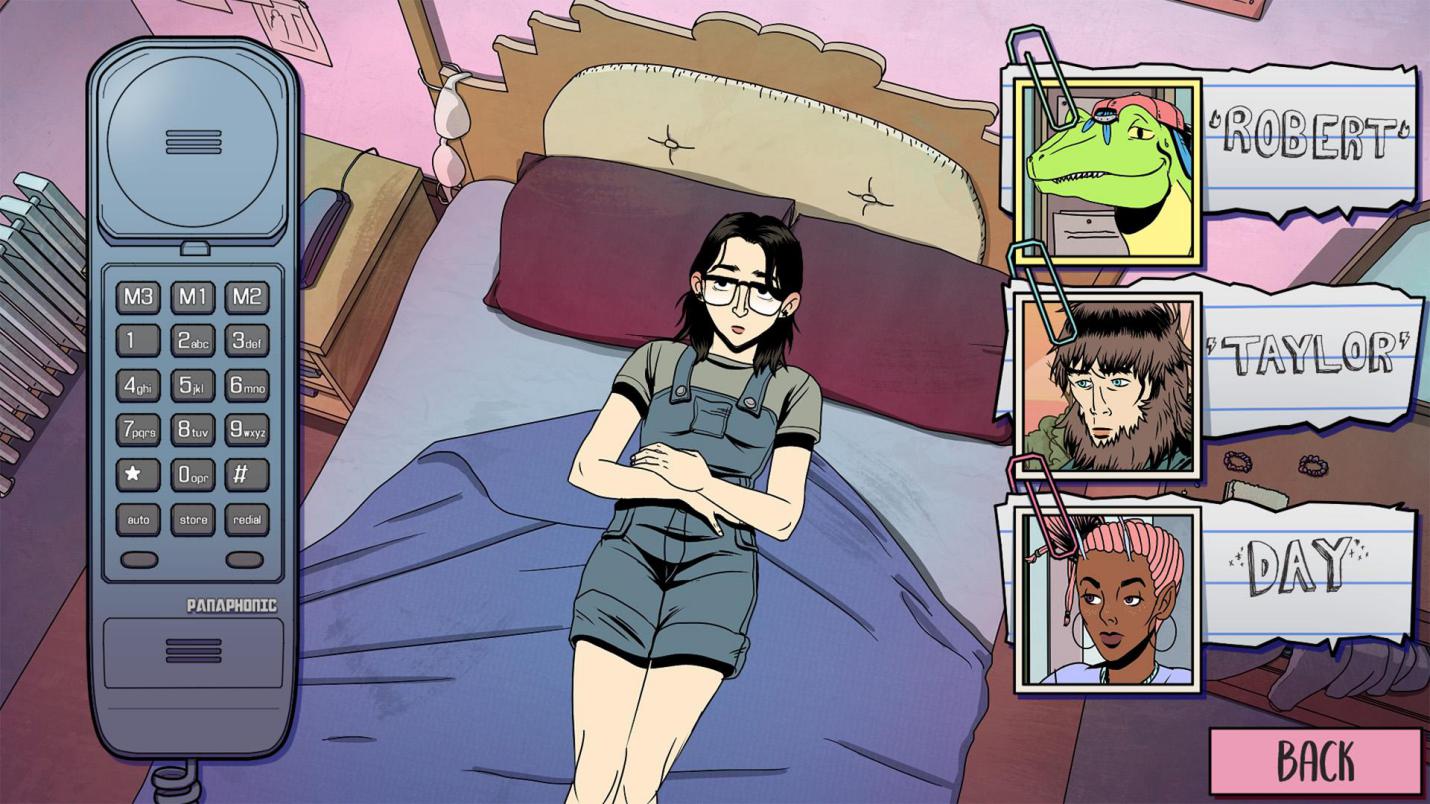 So, I have to wonder: if Rocket Adrift had to pick a suitor, who would it be?

“Taylor. Taylor for me, hands down,” Rollins says. “He is my type. That was the type I’d go for in high school, unfortunately. The loner, guitar-playing, mysterious tragic boy.”

Smith chooses Day, saying that she and Stella “just have a nice friendship that starts the romance off.”

“I think I’ll take the raptor,” McNally says. “Out of the three dateable characters, he’s my favorite to write for, because he can be really funny and also really genuine and vulnerable – I like that dynamic.”

Cuphead and the Racist Spectre of Fleischer Animation