In late April, the below dialogue from BoJack Horseman was uploaded to TikTok by cosplayer @beendemeinleiden, enacting an imaginary conversation between the viewer (BoJack) and Azrael (Herb), biblical angel of death, played by the uploader.

BoJack: Is it… terrifying?

Herb: No. I don’t think so. It’s the way it is, you know? Everything must come to an end. The drip finally stops.

BoJack: See you on the other side.

Herb: Oh Bojack… no. There is no other side. This is it.

Those familiar with Netflix’s critically acclaimed series would recognize the dialogue from the show’s penultimate episode, “The View from Halfway Down.” In it, a drowning, drugged out BoJack on death’s door hallucinates a visit with family and friends that have passed away over the years. His mind conjures a stage where each of these loved ones does a final performance before falling into a tar-filled abyss. When it’s BoJack’s turn, he ignores the mic and walks over to inspect the abyss, a door filled with blackness. This is where the dialogue takes place: between him and his earliest betrayal, the only friend left at the posthumous show, his producer Herb who passed in season two.

The dialogue is quiet and somber, while the visuals are anything but. As he says the last line, black tar from the door emerges and starts consuming Herb’s body, tearing away his flesh and presence. As he finishes the line “this is it” all that’s left is a face, the rest of Herb’s body eaten away. When the tar is finally finished with him, the music goes quiet.

@beendemeinleiden originally uploaded this audio to the goth alt/cosplay side of TikTok, where users frequently dress up as Lilith, Persephone, witches, sympathetic zombies and anything in the realm of Wiccan/underworld cosplay. This short back and forth dialogue would be fitting audio for a TikTok sphere infatuated with death. After all, what is more fitting than accepting the finality after one final performance in life?

But the audio came into its own trend a few short weeks later in May, when user @anyaconda repurposed the audio for an entirely different look at death. 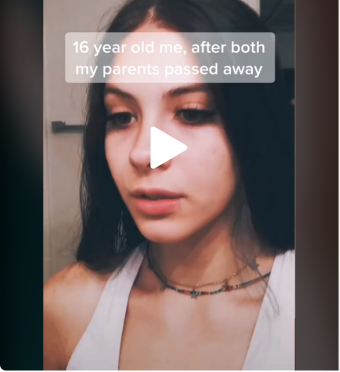 In her video, the user lip synced the BoJack dialogue to simulate a conversation with her younger self about losing her parents at age 16. She interweaved the positive scenes from her life since that initial loss – graduation, getting her own place, buying her first car, new pets and friends – with experiences of her grief – memorial services, letters, a tattoo of her parent’s signature. There’s a contrast between her current and younger selves; the 16 year old, repeating BoJack’s lines, has red eyes from crying, a look dramatically framed by the dark, grainy filter. But her older self, mimicking the wise, explanatory voice of Herb, smiles through, saying “Oh, no. There is no other side” Her eyes, filtered through TikTok’s “shimmer” effect, glint through the last part. “This is it.”

The video went viral, garnering 6.7 million views and 1.6 million likes over a few short weeks. There are currently 58.7K videos using the audio, many of which closely follow the premise of @anyacoda’s. Another popular version was posted by user @hollandstephens, beginning “14 year old me about to lose her best friend”. 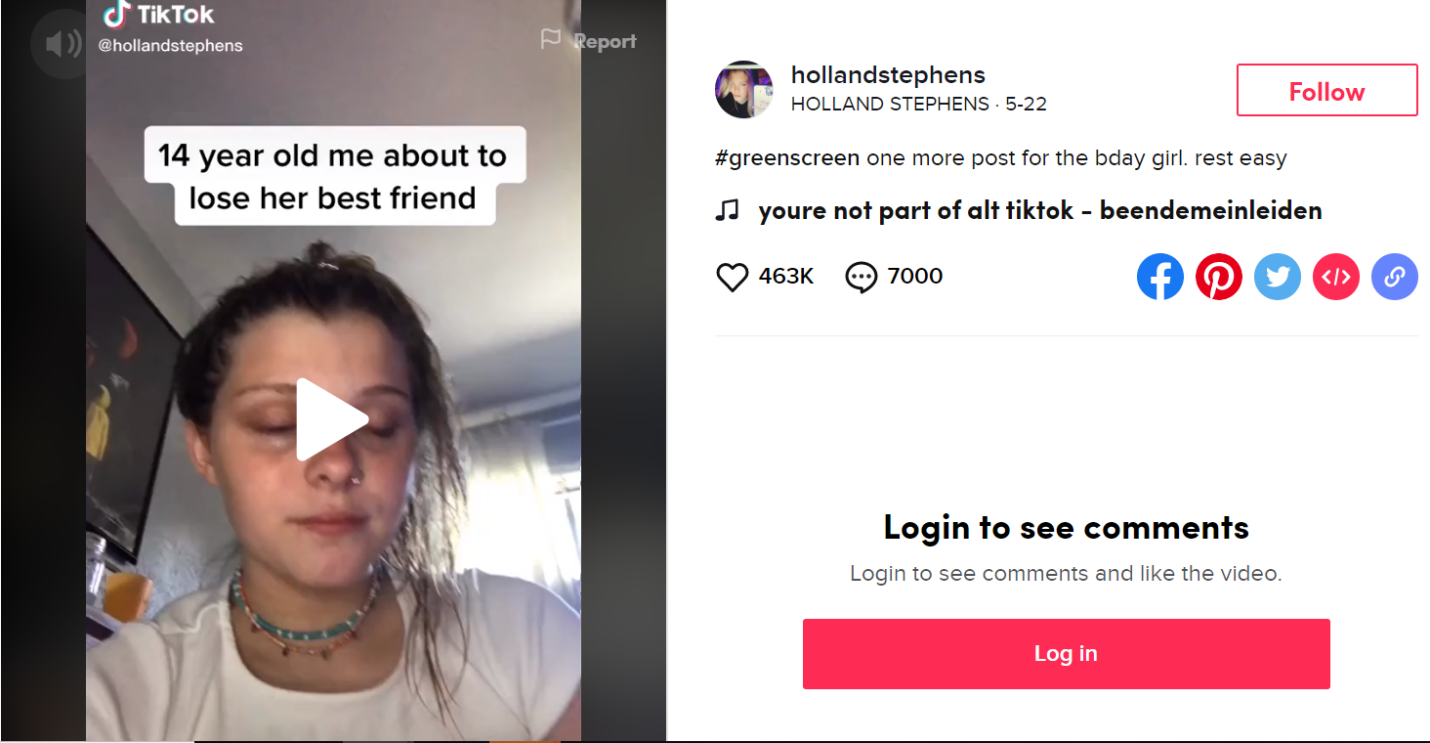 Like @anyaconda’s post, the older, wiser Holland responds to her younger self with positivity rather than despair: “There is no other side” she repeats Herb’s last words with a smile, channeling an expression unseen in the original BoJack episode. Videos of her departed friend flash through as she lip syncs the audio. At the bottom reads: “one more post for the bday girl. Rest easy.”

Another version with 2.2M views, created by user @aaronmcghhee, memorializes his friend’s recent passing with a quote at the bottom “making these videos help a lot:)”. One posted in late April came from a Sandy Hook survivor, telling her 8-year-old self – and everyone viewing the video – “i want everyone to know that it does get better. I promise, let time do its work.”

The story of this trend is clear: Participating is a therapeutic, cathartic experience for the users, and a symbol of hope for those struggling to come to terms from their own loss. Despite the BoJack scene iterating the idea that life is all there is, and there is nothing else, the meme is often used to immortalize those lost and make those memories public.

Remixing, reworking and repurposing is a staple of the internet’s culture – even when the retooled artifact is spoken dialogue. Just think of the lo-fi hip hop craze only a few years back, where samples of 80’s movies and cartoons were common staples of the distorted music. Susan Meiselas once claimed “there is no denying in this digital age that images are increasingly dislocated and far more easily decontextualized.” When she wrote this piece nearly 13 years ago, the digital age’s social media revolution was on the verge of exploding: Twitter had just been founded, Facebook was open to the public for less than a year and Instagram was 4 years away from even existing. But TikTok is a beast of its own. As a service that came a decade after her writing, TikTok exists specifically to decontextualize.

What separates the platform from other video sharing services is the reuse of sound that makes each piece of content. Audio from movies, music, podcasts, any digital stream under the sun is spliced up and lip synced over and over again by young Zoomers. These form trends, where users can find a popular video and easily replicate the content with their own recording, personalizing the experience but retaining the popular premise – contributing to the meme, or developing it.

Here, like in some other trends (notable TikToker Addison Rae recently received backlash for dancing to a song about eating disorders) there’s a strong disconnect between the source material and the trending audio on TikTok. This particular BoJack meme pulls together a hopeful, positive (at worst, bittersweet) rendition. The dialogue, while originally nihilistic, transfers over to a version of positivity. In many cases, the “this is it” line reads less like the final, too late understanding of a mourning, broken celebrity that there is nothing else, and more like Ferris Bueller’s “Life moves pretty fast. If you don’t stop and look around once in a while, you could miss it” mixed with a little “I’ll be in your heart” from Tarzan. For many of those participating in the trend, it’s less about the original context, the finality of death, and more a symbol of hope and their friends living on in the collective conscience. User @aaronmcghhee posted a follow up video to his original, writing ”my best friend mason recently went viral :)” and in the video description itself: “he’s enjoying this 🙂 thank you everyone #MasonTheAngel.” 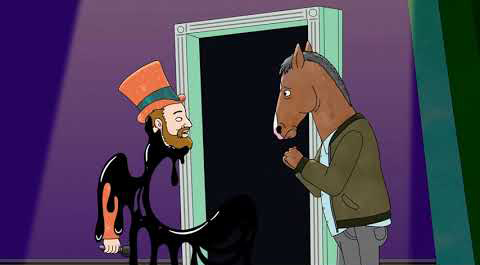 But like many other audio samples on TikTok, not everyone followed the trend – and BoJack and Herb’s final parting words got even more distorted in the jumble. A young user riffed on the original style, where instead of conversing with a lost loved one, she speaks to a girl she played with once on the beach when they were eight and never saw again. One even baited the mourning of the original trend, simulating a conversation over pictures of his three-year-old sister with cancer, only for her to turn out OK at the end. While all these were in line with the original style, or at least played with it, before long it became enveloped in the more “traditional” of TikTok spheres. It was used in videos for makeup exercises, graduating college, even plastic surgery progression. Now, the highest viewed video for the sound, with 3.7 million likes, is a verified TikToker highlighting her subscriber count over the years. Even the original creator who uploaded the audio rebelled against its reuse, naming the audio “you’re not part of alt tiktok.” More changes are still underway – as recently as June 25th, a new audio poking fun at the original has begun trending, where in response to “So…is it terrifying?” user @ya.boi.luke uploaded his own part: “oh yeah, it’s…oh, it is spooky.”

Over Twitter, Alison Tafel, the credited writer for The View from Halfway Down – and the one who originally penned the dialogue above – discussed her surprise to find the language reused and modified for a new generation. Like many TV writers, she recognized the collaborative nature of the narrative form. “While that dialogue is incredibly personal to me and my views…I also know that once the script was turned in, it was no longer really “mine” anymore. It belonged to the show.” She connected with the fact that many pop culture references lose their original context over time, such as the term Stan dating back to the Eminem song, or her own first watch of Waynes World 2 without knowing the cultural references to Woodstock, Colgate or The Graduate. While she never expected such a connection to this particular line, “once it’s out there, it’s a shared experience…BoJack, like all animation and television, is a collaboration.” She acknowledged the fleeting nature of digital trends, – while hoping it would bring more people to the series – that her “only hope, if this trend continues – it probably won’t, everything is fleeting! – is that TikTokers keep using this sound bite in a positive way.”

How much does decontextualizing mean in the digital age? In an app like TikTok, does the context of the sound have any weight at all? When Susan Meiselas wrote her original piece on the repurposing of artistic imagery, it was one side of a copyright dispute between painter and cultural writer Joy Garnett. A photo she took of a Sandinista rebel in Nicaragua was repurposed by Garnett into a painting called “Molotov Man” and spread across the internet, and Meiselas criticized the way it was stripped of its background. As a historian and photographer, she felt a debt to her subject to preserve, or at least defend, his context while “watch[ing] him…converted into the emblem of an abstract riot.” It was the shift of real to imaginary. Her work was decidedly grounded in a historical time and place, but through it’s repurposing, it became emblematic of something larger, something abstract and representative of human spirit rather than an actual human being.

For TikTok’s repurposing of BoJack Horseman, the inverse is true; imaginary gives way to real. A fictitious dialogue between two characters, about death and the fear of mortality, is repurposed for something specific, something tied to each user’s individual place and time. Users take the written dialogue of an acted scene to mourn their very real losses. And they use this to create a space that others can find comfort in – even when space has little, if anything, to do with the original context.

No Home for Petals