Animal Crossing: New Horizons is oddly positioned to be one of the most played games of the year, especially for us at Unwinnable. There’s daily conversations about what is for sale, trading items, turnip prices (or ‘nips if you’re cool) and trying to get people items that are very “them.”

But one recurring conversation that keeps cropping up for us, and elsewhere, is pace. It is time consuming to do even simple tasks in Animal Crossing. This isn’t new. It’s what kept me away until I had a lot of time for a game like New Leaf. Compared to a game like Stardew Valley or Harvest Moon, Animal Crossing is a slog. It’s sprinting through waist deep pudding. Animal Crossing: New Horizons is slow.

People, myself included, have com plained that it is difficult to craft multiple useful things. I can understand why a chair would need to be crafted individually but why bait? Does anyone make one bait? Conversations with vendors are always the same dense lines over, and over again. I certainly know that you can’t sell turnips on Sunday.

Funnily, in this regard, Blathers has made more sense than he ever has. He goes on and on and on, just like his name would imply. Even better, if you ask him to look at one fossil and he determines he wants it, you can give it to him right away. However, if you show him multiple fossils and he finds multiples he wants you have to go back to the top of the conversation tree. Or something. 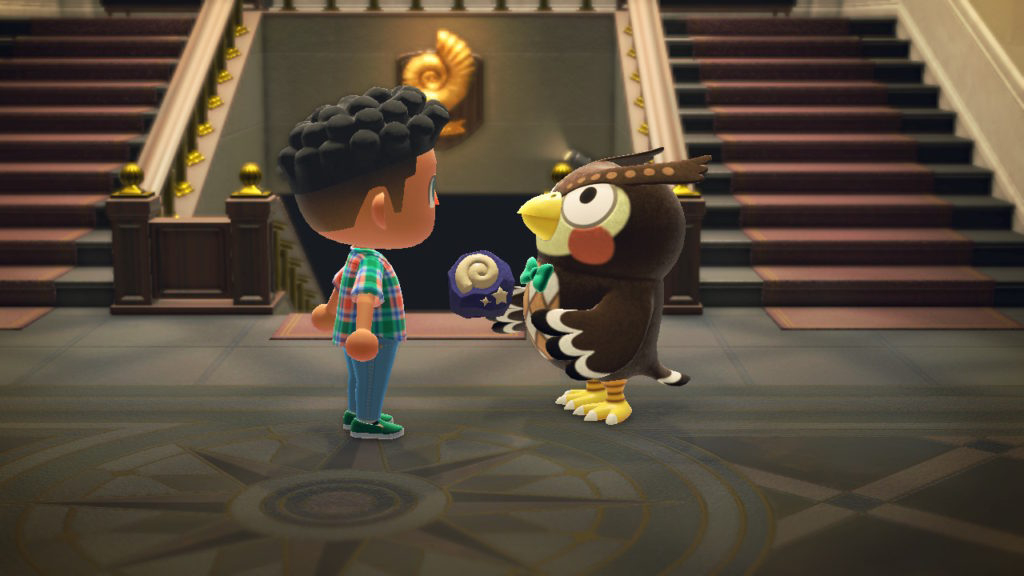 The thing about all of this is that it’s on purpose. Choices were made in order to create a game that limits your ability to be efficient. Even among pastoral, pacey games Animal Crossing has always been very pacey. It’s deep ties to the real word clock and calendar compound this even further. It makes sense that flowers and trees must have time to grow. It especially makes sense that you can’t quickly craft a huge number of benches because they are the hot item this week.

What’s left at the end of all these choices being made is that players are only left with the effect of those choices. This is where the debate over the game being too slow mires itself. One group argues that these are choices (which is true!) and another calls out that they’re frustrated (also true!). But those aren’t incompatible positions. I can definitely see where and why decisions were made but I also would like more of them to have been made in my favor.

This idea of choices becoming effects and eliciting responses isn’t new or novel. It is certainly not unique to Animal Crossing. What is unique is that so many of us are staying home and have much, much more time than normal to throw against a game which actively works against playing in long stretches and playing efficiently. I shot through Doom Eternal in a few days. That game is over to me and I will never go back. However, I will spend months playing Animal Crossing. Its forced dilation of my time means that I will have to if I want to make significant progress.

Animal Crossing is a game designed for you to take it on its terms and that’s weird. We’re coached to think as “consumers.” We are media locusts, moving from one thing to the next after we’ve devoured something. Animal Crossing is a resistant strain, a game made to frustrate those who seek to fill their bellies and move on to the next.

Westworld is Full of Monsters, They’re the Guests
Previous Post