While I am firmly on the “yes” side in the discourse of whether or not games are political, I will be one of the first to admit that if there was a gaming genre that’s for the most part apolitical, it’d be racing games. Not to say that they can’t be political, it’s just unusual for games centered on cars to take stands on social issues in a way that wouldn’t feel like the developers are shoehorning something into them. That said, any game can take a stand on contemporary issues, and before I delve into the recent Need for Speed: Heat, I’d first like to briefly look at its infamous predecessor, 2017’s Need for Speed: Payback, a title that despite being widely criticized for pushing microtransactions, was somewhat anti-gambling in terms of its narrative. While it didn’t make up for a literal slot machine mechanic being what you had to go through in order to upgrade your car, Payback did have an odd tonal dissonance where the  antagonist was a crime organization who fixed races and fronted as a casino, and you the protagonist were tasked with bringing down an unfair house and make racing “fair” again…it might’ve just been coincidental, but maybe Ghost games were making a statement, making the most out a bad situation forced upon them by their notorious publisher.

For their follow-up however, there was much more there that made me really think about what a Need for Speed could’ve been “saying” for once. Not only was 2019’s Heat a massive improvement from the previous game, it might’ve actually been a realization of contemporary themes; instead of being subtly critical of in-game gambling practices, Heat’s quite possibly the most anti-cop game in the entire Need for Speed franchise. Now, anyone familiar with Need for Speed will probably think “Wait, aren’t most NFS games anti-cop?” to which I say, “Technically yes, but in a really simplistic way.” The last game that really made cops primary antagonists was 2013’s Rivals and in that game the fight of cops against racers was like red vs. blue in a Halo game: the only thing that really differentiated the two factions was the color they wore. In other titles, cops were just goons on the payroll of some mobster (like in The Run or Payback), or simple annoyances that would interrupt you during your street racing career (like in Most Wanted or 2015’s Need for Speed). Heat however doesn’t just make them the central antagonist, this time they’re outright villainous, directly bullying the crew you’re a part of while being directly involved in a sports car smuggling scheme. Their depictions aren’t on the level of Officer Tenpenny from GTA San Andreas, but Lt. Mercer does a good job of playing the nefarious man behind the curtain, while Officer Shaw makes his uncomfortable presence known in a scene where he impounds your friend’s car on a whim. It should be a corny moment, but instead it hits surprisingly (and depressingly) close to home with the character being on a power trip, making you squirm in the hopes that nothing even worse happens to you or your friend. 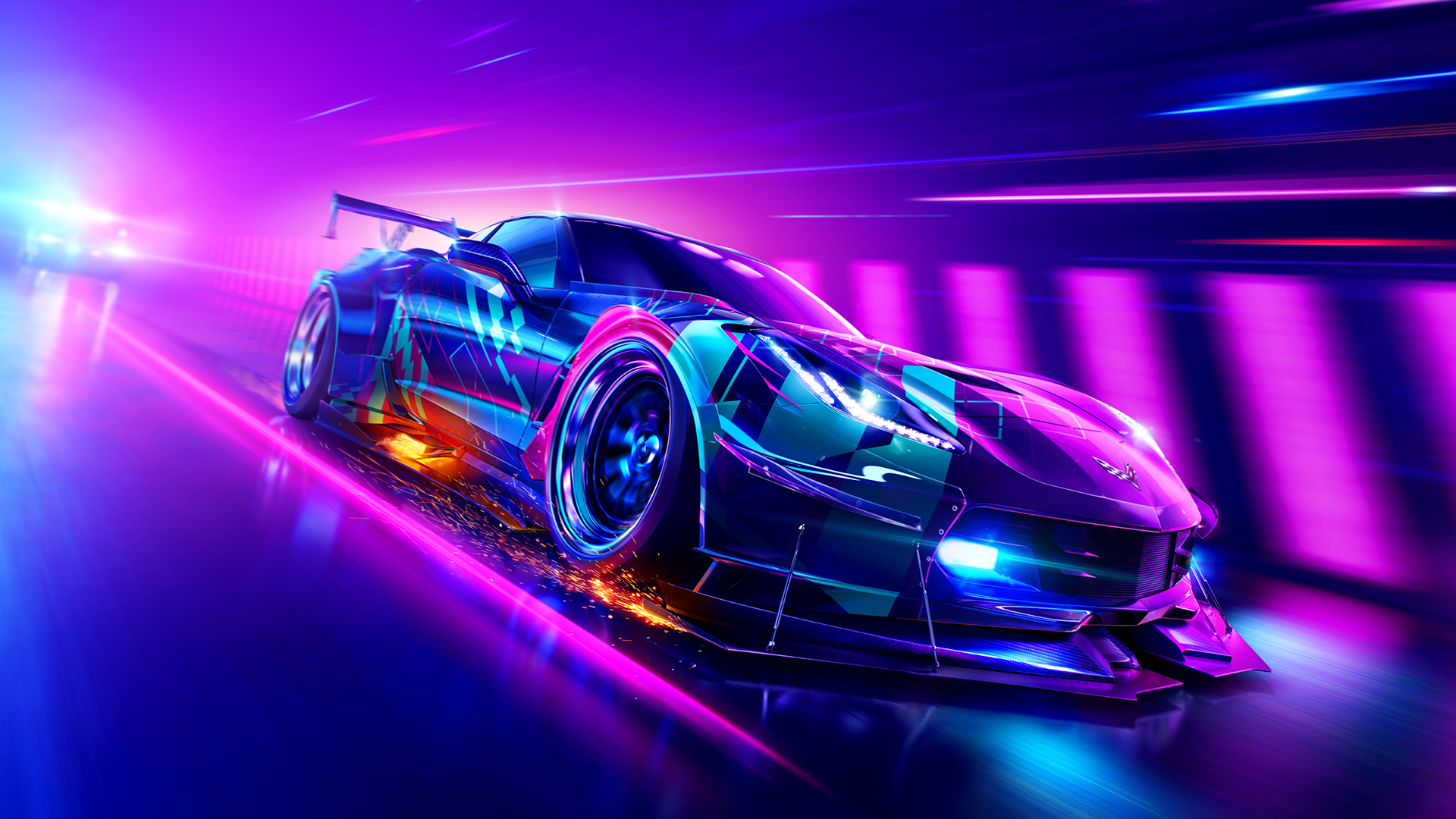 The police don’t just have a stronger narrative presence in this game, the gameplay itself reinforces your own relative powerlessness to them. In previous games you’d usually have spike strips or EMP systems to fight back with, but in Heat all you can do is ram them and run for your life. This game isn’t a power fantasy, it grounds you with something closer to reality: these guys have all the firepower and all you have is your car and your wits. While there have been other NFS titles that put you on the back foot like this, none before have made it feel so personal while doing so, which is why it feels especially satisfying when you do manage to take enemy cars out and find an escape. But another interesting factor besides the antagonists are the people you race with, with Heat having an unexpectedly Latinx look and feel to it. Not only is Heat set in a Miami lookalike, but the in-game soundtrack is dominated by Spanish-speaking artists, which give it a personality I’ve never seen (or heard) before in a racing game. Plus, most of your acquaintances and allies are people of color, with Ana and Lucas giving your crew an unironic heart and soul for a change, inserting family drama in place of the usually weak storytelling the series is infamous for.

The last aspect of this game that I believe is noteworthy is its use of “bisexual lighting,” a photography technique that relies heavily on blue, purple and pink lighting. Despite the LGBT nomenclature, it’s often utilized to make actors with darker skin tones appear better onscreen in dark environments, to empower people who’ve at times been literally hidden in shadow. Not only is this color scheme present on the box art of the game and in most of its marketing, but it’s used in every nighttime race to act as neon signaling to the player of which corner to take. It’s a superb creative decision, but perhaps its implementation is also there to set Heat’s narrative tone as well. I find it fitting that the side opposing the all too familiar blue and red is composed of shades of purple. But I will admit too that it’s hard to say if any of this was intentional, or just design choices made to make the game look cooler, make the setting more distinct, or the story and characters more memorable. But unintentional or not, these factors have made Need for Speed: Heat the most memorable entry in nearly a decade, because for once a racing game feels like a reflection of its time. Not just by which cutting edge super cars are in its garage, but by how it interpreted and presented the world the drivers have found themselves in.

Game Dev 101: There’s a First Time for Everything

A Juggler’s Tale: Pull the Strings