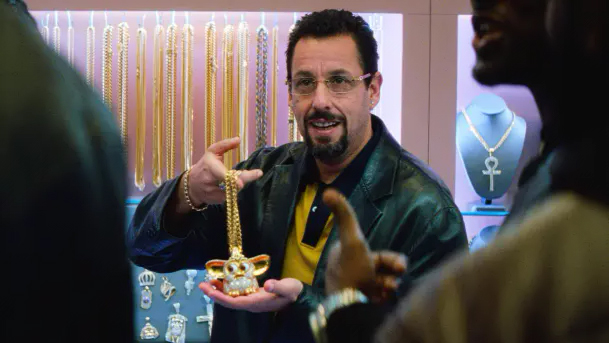 “Uncut Gems,” a film starring Adam Sandler and directed by Josh and Benny Safdie, highlights Howard Ratner, a diamond dealer with a gambling addiction. This film has been praised by many, but does it display the truth behind sports betting? Most sports bettors would use a resource like this one to get the edge. But most importantly about the movie, should you spend your time going to see it?

Regarded as one of Sandler’s best performances to date, we follow Howard over the course of a few days as he tries to erase his gambling debts by placing high-risk wagers in hopes of winning big. His absurd idealism creates a world in which he scores big, pays off his debt, and gets a fresh start.

His addiction, of course, will clearly not allow him to do so. Sandler isn’t the only notable actor in this one. With a strong supporting cast that includes Lakeith Stanfield (Get Out, Atlanta), Sandler surrounded himself with talent in one of his most intense performances.

The opening sequence might catch some off guard as we are shown a black opal and then the process of Howard’s colonoscopy. Although strange, it indicates right from the start Howard’s obsession with big payouts, most of which come from sports betting.

Shortly after this sequence, for some reason, former NBA star Kevin Garnett, who plays himself in “Uncut Gems,” has found his way into Howard’s diamond shop. During an exchange between Garnett and Howard, Howard, of course, shows off his latest prize, his precious black opal.

Garnett then proposes borrowing it for the Eastern Conference Finals, which begins the cascade of bad decisions made by Howard. In exchange for Garnett’s championship ring (which Howard pawns), he has the cash to place an incredibly unrealistic and frankly stupid bet. Not only does he bet on the Boston Celtics, but also Garnett’s output in a six-way parlay.

This first bet is where “Uncut Gems” starts to stray away from the realism of sports gambling. To sum up this insane six-way parlay, Howard needs Boston to win by one point (not unrealistic), Boston to be winning at halftime, Garnett having more points, rebounds and blocked shots than projected, and Boston needs to win the opening tip.

So, all but one of those picks are completely ridiculous to make on a parlay considering at least one, if not all, won’t end up going in your favor. Perhaps the most idiotic bet placed by Howard is his $1,000 “lightning bet,” which states that he will win or owe a thousand dollars for every point the Celtics win or lose by.

For example, if Boston won by three points, he’d win $3,000, but if it lost by three points, he’d owe $3,000. In reality, there isn’t a sportsbook on the planet that would accept this kind of wager, as you’d more than likely have to find an illegal bookie (a very bad idea) to take that action.

Miraculously, this bet comes to fruition except for the part where Howard’s brother-in-law stops the bet, rendering Howard’s parlay null and void.

This leads to Howard making another risky bet involving Garnett and the Celtics, yet again betting on the opening tip. Honestly, as someone who gambles often, I can tell you that most bettors don’t pick the same bet twice.

Howard’s affinity for betting on tipoffs is essentially flipping a coin because there is no real way to tell how it’s going to go, considering how fickle it can be. This high-risk, high-reward style of gambling is uncommon but not unheard of.

Often, bettors will place parlay bets on multiple teams, not multiple events inside of a single game. However, Sandler’s portrayal of someone dealing with a gambling addiction is spot-on, as with addiction come euphoric highs and debilitating losses, all while not being able to stop yourself.

Try To Keep Up

Throughout the film, moviegoers unfamiliar with sports betting could be thrown off by the jargon used. As intense as it might sound during the movie, the world of sports gambling is relatively simple. Even the most novice gambler has an opportunity to win big like Howard Ratner, with a lot less risk.

“Uncut Gems,” in a way, works as a cautionary tale for bettors that get “in too deep,” which doesn’t necessarily apply to most gamblers.

This film isn’t supposed to represent the average gambler, mainly because even a novice would know it’s a bad idea to bet the house on a tipoff. That being said, some aspects of the process are quite realistic, with line averages and prop bets being something many bettors have made huge paydays on.

For instance, in Superbowl LIII, a very lucky bettor won a 400-1 bet on the Los Angeles Rams to only score three points. This prop bet won him $100,000 on a $250 bet, a real Howard Ratner story. Maybe if you play your cards right and make the right pick, you could have one too.

For Sure or Flop? For Sure

Anyone should take some time out of their day to see this film, as Sandler delivers one of his best performances, and the cast around him really helps the movie along. Considering gambling addiction is something that many people suffer from, it’s nice to see a movie done about the dangers of not knowing when to quit.

Full of suspense and Sandler’s lovable face, For Sure, go see “Uncut Gems.”