Imagine life in Chavez’s EQ. An existence in seats B and E. The illusion of volume that still burns like ultraviolet light streaming through an overcast afternoon. A curiosity mummified tight, the world’s borders stretching for the square footage of a step-in closet at best.

I’m unable to claim expertise on an engineer’s level (disqualifying me from music criticism altogether, according to some major artists), but I’ve read the scoop on Chavez’s fondness for compression. The loud wars, fighting for a slice of the sonic spectrum outside of an interstate drone or the roaring train or a constant breeze always rapping on your windows. When you want that full-body conduction without paying with cochlear hair, one might flatten the collective waves so that the signal looks like a fallen monolith. You’ll hear more at once, but lose the topography.

This wasn’t Chavez’s only coat, but when they returned after a decade-plus in the wings the familiar polish gleamed just the same. They dropped the three-song EP Cockfighters without much hullabaloo; to do otherwise would have tarnished their idiosyncratic alt-rock adjacency. 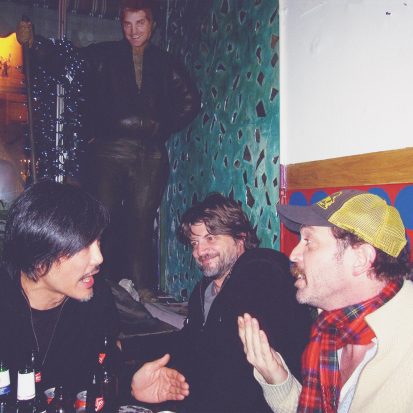 The band thrived under limitation, on the equalizer rack or within the four-piece rock context. Compression made them diamond-hard and similarly sharp. Cockfighters doesn’t cut far from the cred-rich jib of their 90’s albums, exercises in wrestling with and against conventionality while still echoing out from the primordial forms. It’s rock ’n roll, you can’t help gravitating towards the references even as the band hops out of orbit. You groove but remain unable to guess or predict the path.

“The Singer Lied” sweeps up fast, riding a non-pentatonic lick through a tunnel that hides any light at the ends. You’ve never heard drums so suspicious of the two and the four. If the bass was any fuzzier it would be sampled for Inception. Two minutes pass and you can’t shake the feeling that you are forgetting something, your stomach boiling up for another bite.

Track two stirs a little more sweetly at first, but not without some drop-tuned hints of unease. Matt Sweeney croons with the worn but crack-free leather voice of master in classic rock, all brushed aluminum and elegance. “Blank in the Blaze” layers up to a few soaring bridges that wear masks that mimic a chorus, but the real climax is their clipped high-neck riffage and wooly bass. Chavez leads you up a mountain trail at night and before you know it the city and the stars are all laid out.

The in-studio reunion crashes out too fast with “The Bully Boys” where Matt summons the spirits of pawnshop rhythm and blues singers buried in unmarked graves. All these jams unreal too fast. They’re the last mash of an abused tape deck remixing the reel ad hoc. They sound bigger than any trio with hired guns behind the curtains, drums drunk on a pocket full of swing, licks soaked in swagger, but all too curious to adhere to a straight-nailed railroad track.

Cockfighters isn’t enough. I’m hungry for fresh Chavez every day. Luckily each track from their entire catalog scans almost new every time, links between each sound spread out like yarn on cork. This band is compressed in the highs, the lows, and the songwriting, mineral-packed veins wound tight as a helix. Chavez’s songs are mysteries never fully solved, where each listen bleeds fresh leads.