Contrary to popular belief, journalistic best practice has little to do with objectivity, and everything to do with finding the truth while in pursuit of information that’s in the public interest. In their 2001 treatise on journalistic best practices The Elements of Journalism: What Newspeople Should Know and the Public Should Expect (a book written explicitly to redefine such outdated conceptions of the practice), authors Bill Kovach and Tom Rosentiel argue that because journalists are required to make decisions about which information gets shared, objectivity is impossible. The field’s methodology for verifying accuracy is what’s objective, not the practictioner doing the work.

If objectivity is impossible and interests both personal and powerful influence coverage, then what does sound journalistic best practice mean for society?

This doesn’t mean journalism is about serving the agenda of any interest group. If objectivity is impossible and interests both personal and powerful influence coverage, then what does sound journalistic best practice mean for society? That’s the question at the heart of Unbound Creations’ 2018 PC hit Headliner: Novinews (recently re-released on Nintendo Switch), a brisk narrative adventure that delves into the social impact of media bias and how editorial decisions affect real-world outcomes. It’s a game about making choices while weighing which version of morality matters most, asking players to choose how they’ll serve citizens with differing values, balance checks on power, and pursue often frustratingly grey notions of truth.

The game takes place in the fictional nation of Novistan, where an epidemic associated with genetic modification is spreading. Players assume the role of a headline editor at a news organization called Novinews, selecting which stories get published and which get rejected. It’s somewhat akin to Papers, Please, but with a brighter aesthetic that belies some subtle yet grim undertones. A single playthrough takes about 90 minutes, and with several possible endings, it’s designed to encourage repeat sessions.

Each day begins with a briefing from your boss about not pissing off the paper’s corporate sponsor (a synthetic alcohol manufacturer) and avoiding upsetting the nation’s authoritarian Prime Minister. You’re then presented with a short series of brief news articles which you can either green light or discard. There’s a daily quota for pieces published too, which can force some tough decisions on sketchy headlines. 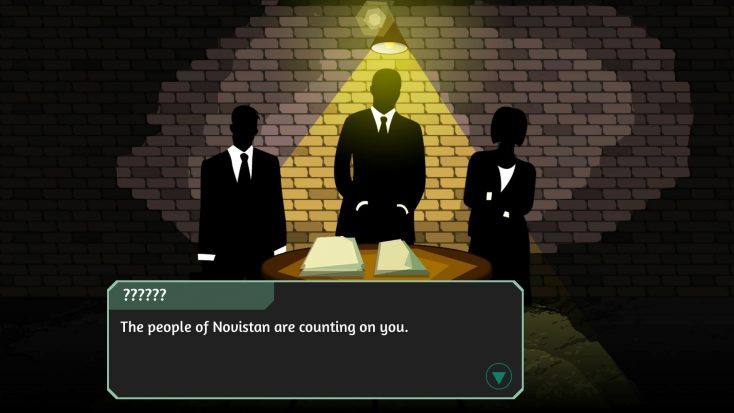 After work, you can walk through the community while developing relationships with a coworker (a reporter from another country), your brother (who’s struggling with his stand-up comedy career) and a local shopkeeper (a single dad worried about keeping his small business afloat). The tangles of their lives slowly overlap in complex ways, and over time, more entwined with what you choose to cover. You can also see visible changes in the city’s appearance and in NPC conversations based on what you report.

The articles that come across your desk are all tied to contemporary socio-political issues like healthcare, immigration, globalization, surveillance, authoritarianism and more. As such, it’s initially easy enough to let your own moral compass on those issues guide your hand, though it becomes more difficult as more sources of outside influence (ranging from people on the street to shadowy activist groups) impact your thinking.

Detecting the partisan slant in headlines works the same way it does in actual media. For example, a violent crime story might mention the suspect was from another country. While this may be factually accurate, publishing it might reinforce a broad fear of foreigners, regardless of their national origin. Conversely, choosing not to publish the piece might reduce support for initiatives to lower crime rates. Whichever decision you make reflects bias in editorial judgement, and since you don’t have the option of simply scrubbing details from the piece, you’re forced to pick sides whether you want to or not.

Attempting to steer the story toward a desired outcome may actually be met with a multitude of unintended consequences, and doing the right thing isn’t always crystal clear.

While Headliner deals with heavy subject matter, it also understands it’s a videogame. As one that gives players a wide degree of latitude in how they navigate its branching dialogue paths, it will allow you to intentionally watch the world burn if you so choose. However, it’s at its best when you earnestly attempt to balance both commitment to accuracy and the best interests of the citizens you serve (two pillars Kovach and Rosentiel establish as essential to the craft) with sticking to your moral principles, all within a framework that makes doing each of things at once difficult.

It’s in the tense moments where you agonize over which stories to publish that  Headliner begins to reveal its depth. Attempting to steer the story toward a desired outcome may actually be met with a multitude of unintended consequences, and doing the right thing isn’t always crystal clear.

When in doubt, it’s useful to remember journalists must maintain professional separation from their sources (another core principle outlined in Kovach and Rosentiel’s writing). However, there’s zero pretense that objectivity is the name of the game, and there’s no reward for trying to uphold that impossible ideal. Instead, what’s more likely to lead one toward negative outcomes is setting aside professional values in favor of personal ones. Despite your own best efforts, this can sometimes leave you feeling more like an amateur puppet master and less like the arbiter of justice you wish to be.

When everything is said and done, Headliner gives you a short ending that summarizes the outcomes your decision-making over the previous two weeks. There’s no direct judgement of your moral fiber (you’re left to dwell on that yourself), just a plain-stated list of facts explaining how you shaped public opinion. This might be the closest the game gets to achieving objectivity in any real sense, but if you don’t like the outcome, you’re expected to start over and see the story from different angle.

Completing Headliner left me with more questions than answers about my own values and priorities (for example, I spent a lot of time and money keeping an adopted puppy happy – which you can pet – while people I sought to protect went missing at the hands of an authoritarian regime). That’s a testament to the game’s design and how successfully it achieves its mission of forcing you to consider views that exist outside your own media bubble, while holding yourself to the same moral standard you’d expect of others. Easier said than done, but fortunately, I can always play again.

How About a Refund?