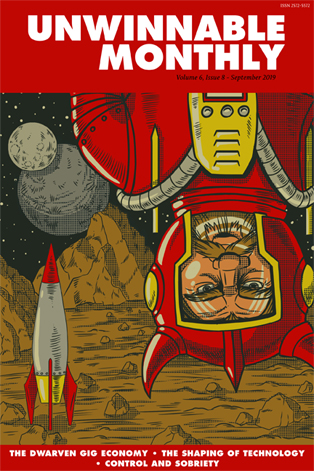 This is a reprint of the letter from the editor in Unwinnable Monthly Issue 119. You can buy Issue 119 now, or purchase a monthly subscription to make sure you never miss an issue!

Welcome to the September issue of Unwinnable Monthly!

Before we get the usual rundown, I want to bid Megan Condis a fond farewell. Her column, Documentary Sunday, has been a staple of Unwinnable Monthly since January of 2017, but other projects now demand her energy. Megan is a fantastic writer – it was a joy to work with her regularly for so long and we will all miss her contributions. I wish her much success in her new pursuits and look forward to seeing her pitch some features in the near future.

Now, about that cover. Don’t you just adore it? That’s the fantastic work of Thérèse Lanz getting you ready for Ian Williams’ feature on Deep Rock Galactic, space dwarves and the gig economy.

We have two more features for you this month. Harry Mackin takes a look at the film Personal Shopper and the game Legend of Zelda: Breath of the Wild – its an odd pairing for sure, but gets at some interesting notions about how we interact with technology (and how it interacts with us). The final feature is a bit of a confessional from Blake Hester about Control and sobriety, and I think I’ll just let his work speak for itself. We also have Thérèse in our Artist Spotlight, naturally.

Megan’s column this month is on Jiro Dreams of Sushi – saving the best for last, I see. Astrid Budgor and Noah Springer have a boatload of heavy metal and hip hop recommendations respectively. And Deirdre Coyle returns from her hiatus with a look at Grim Soul, microtransactions and loneliness.

Justin Reeves looks at how odd Japanese zoning laws shape the architecture presented in Yakuza Kiwami 2. Rob Rich celebrates a return to the Saturday mornings of his youth with Netflix’s nostalgic reboots of Carmen Sandiego and She-Ra. Adam Boffa returns to Nausicaä – this time the manga – and ruminates some more on Miyazaki’s struggle-filled but hopeful philosophy of environmentalism. Finally, Jason McMaster taps some more nostalgia, this time for turn-based strategy, thanks to Warhammer 40k: Gladius.

That should hold you till October and the next issue of Exploits, I think!

Two Lives Lived – The Story of the Omm Sety