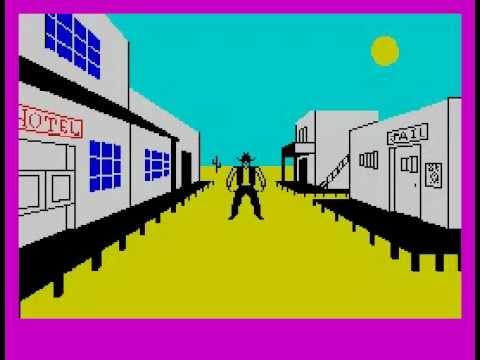 Nostalgia is a strange emotion, and it can lead to the most skewed recollections. Those of us who think back with fondness to our first car would be horrified by the noise, vibration and unreliability if we were asked to drive it today, while those TV series we loved as kids seem embarrassingly lame when you see them being rerun.

But what about computer games? For anyone who grew up in the 80s, they formed an essential component of childhood. While arcade classics like PacMan or Frogger can still entertain, text adventures do not carry the years so well. In games like The Hobbit, a stream of text describing rivers, trees and wizards soon wears thin. However, The Wild Bunch had aspects of gameplay that were ahead of its time, and make it a game that can still entertain to this day.

Roaming the wild west, your character comes across the aftermath of a gunfight. With his dying breath, the murdered man tells you that he was shot by a member of the notorious Wild Bunch and gives you a brief description of the killer. As you pick up the smoking gun, the sheriff arrives, and assumes you are the murderer. As you disappear into the night, you are faced with the choice of either bringing the guilty party to justice or facing life on the run.

There are two distinct parts to the game, the process of travelling between the five towns on the map and the activities you can undertake when you get there. Each town has a sheriff’s office, where you can look at “wanted” posters to gather intelligence on the different members of the Wild Bunch and narrow down the identity of your quarry. There’s also a shop in which to procure everything from bullets to snakebite medicine, and even a horse and saddle to make travel faster and less hazardous. But it is in the saloon that the magic really happens.

A game within a game

Ostensibly, the main purpose of the saloon is to interact with others in the town and, perhaps, take a likely outlaw to the sheriff. But the aspect that most people remember is the poker game in which you can boost your finances, and maybe go to the shop to buy that horse. For many impressionable youngsters, this was our first introduction to how to play poker, and those early experiments on when to call, raise or throw in your cards can put you in good stead in today’s world of live poker games at the online casinos.

Another aspect of this game that sets it apart is the use of humor. As you travel between towns, you will meet a range of adversaries, both human and animal, and will be given the choice of “run, fight or bribe” – choose the latter option against a non-human adversary, and you are greeted with the dry question “what’s a vulture going to want with $20?” The saloon showdowns can also descend into farce if you challenge the wrong person, and end up accusing the mayor or even the sheriff’s deputy of being a dangerous murderer.

The Wild Bunch introduced divergent game components, subgames, and genuine entertainment into our 8-bit lives. If you have a vintage computer or emulator, it makes a worthy addition to your game collection, all these years later.

Do Online Casinos Offer a Better Edge Than Their Brick and Mortar Counterparts?
Previous Post