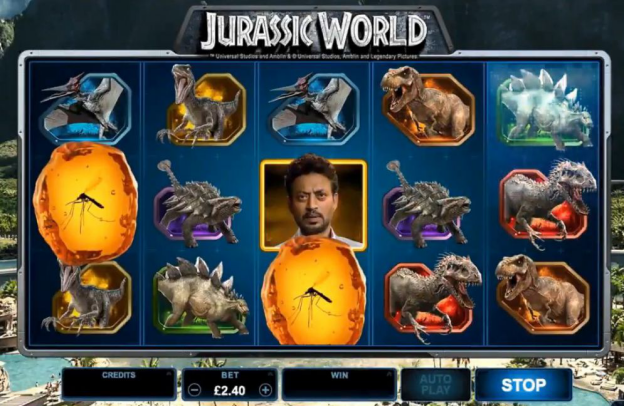 Released in 2015, Jurassic Word is one of the most captivating movies in the history of American science fiction adventure films. It’s the 4th movie in the Jurassic Park film series and the 1st in the ground-breaking Jurassic World trilogy. Thanks to the striking relationship between the movie industry and the online gambling industry, fans of the movie can now play an amazing video slot brought to us by the famous Microgaming. If you loved the movie and you also play online casino games, you’ll definitely love the slot version of the movie. Let’s see what movie fans can expect from the slot.

Microgaming’s Jurassic World video slot was released in June 2017. If you’ve ever played online slots, you must be aware of the fact that online slots differ in terms of the number of reels, rows and paylines. Although these features may have nothing to do with the movie, you’ll be excited to know that the game has 243 paylines. In simple words, you can win prizes by creating up to 243 different combinations of winning symbols! This is a huge opportunity because some of the slot machines you’ll find today have less than 10 paylines. The slot has 5 reels and 3 rows, which is a common layout for many slot games.

Quality Graphics and Symbols on the Reels

One of the best things about experienced casino game developers is that they know how to attract the attention of movie viewers. When it comes to movie-themed slots from popular developers like Microgaming, players can expect to see top-notch images and actual scenes from the respective films. In addition, slot designers will make you want to play these games by including images of the actual characters from the movie.

Microgaming’s Jurassic World slot is a good example of what a movie-themed online slot should look like in terms of graphics and symbols that appear on the reels during gameplay. Once you load the game, you’ll be fascinated by the visually attractive images of your favourite characters from the movie. These include Owen (Chris Pratt), Claire Dearing (Bryce Dallas Howard), Vic Hoskins (Vincent D’Onofrio), and Simon Masrani (Irrfan Khan). In addition, you will see the various dinosaurs including the incredible Velociraptor, Ankylosaurus, Pteranodon, Stegosaurus, Tyrannosaurus and Indominus.

If you happen to play online slots at reputable online casinos like All Slots, definitely know what it means to play casino games with fantastic bonus features. Video slots may have several things in common such as the number of reels, row, and paylines, but they usually differ in terms of bonus features. Well-designed video slots come with unique bonus features and some of those features are inspired by certain movie characters and scenes.

Fans of the Jurassic World trilogy will love Microgaming’s Jurassic World slot because of its thrilling and groundbreaking features. The main objective of these features is to boost the player’s chances of landing a massive win. Before we talk about the slot’s bonus features, let’s talk about the Wild symbol (dinosaur skeleton in an oval shape) and the Scatter (mosquito). Most online slots have these features. As usual, the Wild symbol substitutes for all symbols except for the Scatter to complete winning combinations. The best part about the game’s Wild is that it can appear in stacks with up to 10 Wilds! When this happens, your chances of winning a prize increase significantly. Another amazing thing is that 2 Scatters can turn into Wilds in the base game.

Three or more Scatters will trigger the slot’s Free Spins feature giving you the opportunity to explore 3 different location. At this point, you actually feel like you are taking part in the actual movie because you get the opportunity to visit these locations:

In addition to the 3 Free Spin locations, Jurassic World comes with a fantastic Indominus Feature. During this feature, the Indominus Rex can multiply your total bet up to 1,000 times!

All in all, Microgaming’s Jurassic World video slot is a great option for fans of the film series. You’ll love the game if you love the movie.

Who Will Win eSports’ Biggest Prize?

Check out these 8 unusual/weird casino games