I know: the world does not need more Avengers commentary. But because I wrote about Infinity War last year, and because the entire premise of that piece rested on pretending that Avengers 4 (now titled Endgame) would never be released, I thought it only fair that I offer a follow up.

The first act of Endgame teases some heavier, more introspective material, and as a result it’s the most engaging part of the film. For a while, it appears as though the Marvel franchise is going to directly address ideas about superhero culpability and the repercussions of the team’s selfishness in Infinity War (things I complained about in my piece last year, though ultimately I did not receive a writing credit on Avengers: Endgame). Endgame opens with the remaining Avengers dealing with grief and trying to make sense of a world hollowed out by Thanos’ victory. (Notably, it does not examine the horrors, or even the logistics, of what living in a world with half of humanity gone might mean for all of the non-superheroes still alive. It is still a movie about superheroes, after all.)

Endgame doesn’t follow through on this thematic potential, though. The first issue is that it doesn’t grapple with the disparity in responsibility here. In a scene that sees Steve Rogers in a group therapy session, for example, everyone shares stories of their struggles to put their lives back together after half of all life evaporated, and the film portrays it as a moving act of commiseration, a communal attempt at healing. But this is sort of ridiculous. Steve Rogers is not just another leftover guy trying to make sense of this awful new world, he’s one of the very few people who could have prevented this nightmare but totally whiffed it. His emotional situation would be very different from everyone else’s in that room, and so to place him on the same plane as them obscures the hierarchy at the core of all of these stories. Someone sitting in on that session might reasonably ask why Captain America is coaching them on being chipper in the wasteland. A more honest version of this scene might have involved the people in attendance screaming at Steve Rogers for an hour in an act of unadulterated catharsis.

The other issue with Endgame’s attempts at dealing with more serious thematic material is that it almost immediately sidesteps all of them by introducing a time travel plot. This accomplishes a couple of things: it gives the fanbase a procession of in-jokes and references to enjoy, and it also obliterates the momentum teased in that first act. There’s no longer any question of how the Avengers will come to terms with this brutal new reality, or if they will succeed in their efforts to change it; instead the questions center on how much nostalgia for recent movies can be crammed into the middle act of a three-hour blockbuster. Eventually, the time travel plot device allows almost everyone to get everything they want, aside from a small number of sacrifices. The characters avoid major compromises or disappointments because they’re able to settle their affairs and get closure before the credits roll. 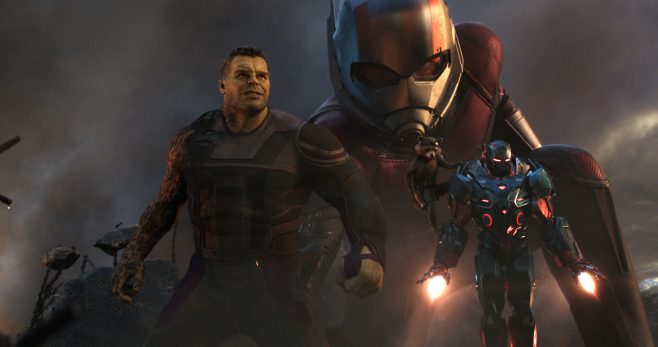 The strangest of this trend of tidy, uncomplicated resolutions is in the film’s last moments. If anybody could be said to be the main character of Endgame, it would be Tony Stark, and the film’s veneration of him also acts as a way of reframing the past decade to suggest that, really, this whole franchise up to now has been Tony’s story. So it’s a little odd that the final scenes of this movie bring the focus to Captain America. The very last frames of this entire, 11-year saga feature a dreamy throwback to mid-century Americana, as Rogers (through the miracle of time travel) reunites with his lost love for a slow dance.

If we are working from within the logic of this movie’s narrative, it’s tough to explain why the film ends this way. Stark’s story would seem to be the more fitting conclusion. Instead, in its final beat, the Marvel Cinematic Universe can’t resist doing what it has so dependably done, and it offers up some sort of reassuring, wholesome vision of the United States. Dozens of hours of film ultimately lead to a reminder of the purity of the US and a longing for its postwar glory days, along with a hope that we might be able to return to them sometime soon. Perhaps this is not quite as unprecedented a media experience as the Russo brothers had led me to believe.

Though this seems narratively strange to me, it’s not so surprising thematically. Starting with 2008’s Iron Man (made in cooperation with the US military), the MCU has sought to preserve a certain mythology of the United States. It sometimes does this in roundabout ways by first offering ostensible critiques of the US government (see: the Captain America trilogy), but it presents these criticisms as a way to ultimately reaffirm that the spirit of the idealized, virtuous US is still out there (usually represented by Captain America himself) and that, in due time, it will take charge again. That the series ends with this message is, if nothing else, consistent.

My original piece on Infinity War last year tried to make sense of a movie that felt half-finished but that its creators claimed was a complete work. What would it mean thematically if audiences went into this long, bleak movie not expecting that a resolution were on its way a year later? In retrospect, it actually does feel a bit like Infinity War was its own thing, not just one half of a two-part story. This is because Endgame doesn’t quite offer an exploration of the ideas and characters featured in Infinity War in the way sequels typically do. Though its plot beats continue from where Infinity War left off, Endgame avoids dealing with the repercussions of storytelling decisions made in its predecessor wherever possible. It instead offers a long series of reassurances, undoing and reversing unpleasant plot twists as needed. We could consider the narrative or thematic motivations behind these filmmaking choices, but I doubt any would be as convincing as the fact that the trailer for Spider-Man: Far From Home premiered just 10 days after Endgame hit theaters. So long as there is still money to be made, real endings probably won’t be part of the plan.