I won’t pretend to know much (or anything, really) about the backstory to Byte Driver. Truth be told I saw the trailer and thought it looked neat, then Mike T – the game’s designer – asked me on Mastodon if I’d like to check it out and I was like “Yes please!” and that’s pretty much it. But yeah, Byte Driver is basically exactly what I expecting when I first saw it in motion like a week or so before going hands-on. Which is to say it’s an extremely stylized and challenging homage to arcade racing games from an era where “3D graphics” were pretty much limited to goofy looking visual effects. And Tron.

Another way to put it is to imagine a driving game from the late 80s, but if it were conceptualized in the late 70s by someone who was trying to predict what computers and computer hacking would be like in The Year 2000. It makes sense if you play the game, trust me. Also imagine that person composing the soundtrack.

To say that Byte Driver is very much my aesthetic would be . . . right on the money, actually. I unironically adore retro future and over the top 80s styles, whether from stuff that actually came out in that time period or from more modern creations that aim to bottle that goofy nostalgia. The wireframe visuals, accentuated by little contemporary effects like screen shakes and smoother animations, would have sold me on their own but the way the background gradients look so blocky and occasionally “break” (because hacking, you see) really sell it. 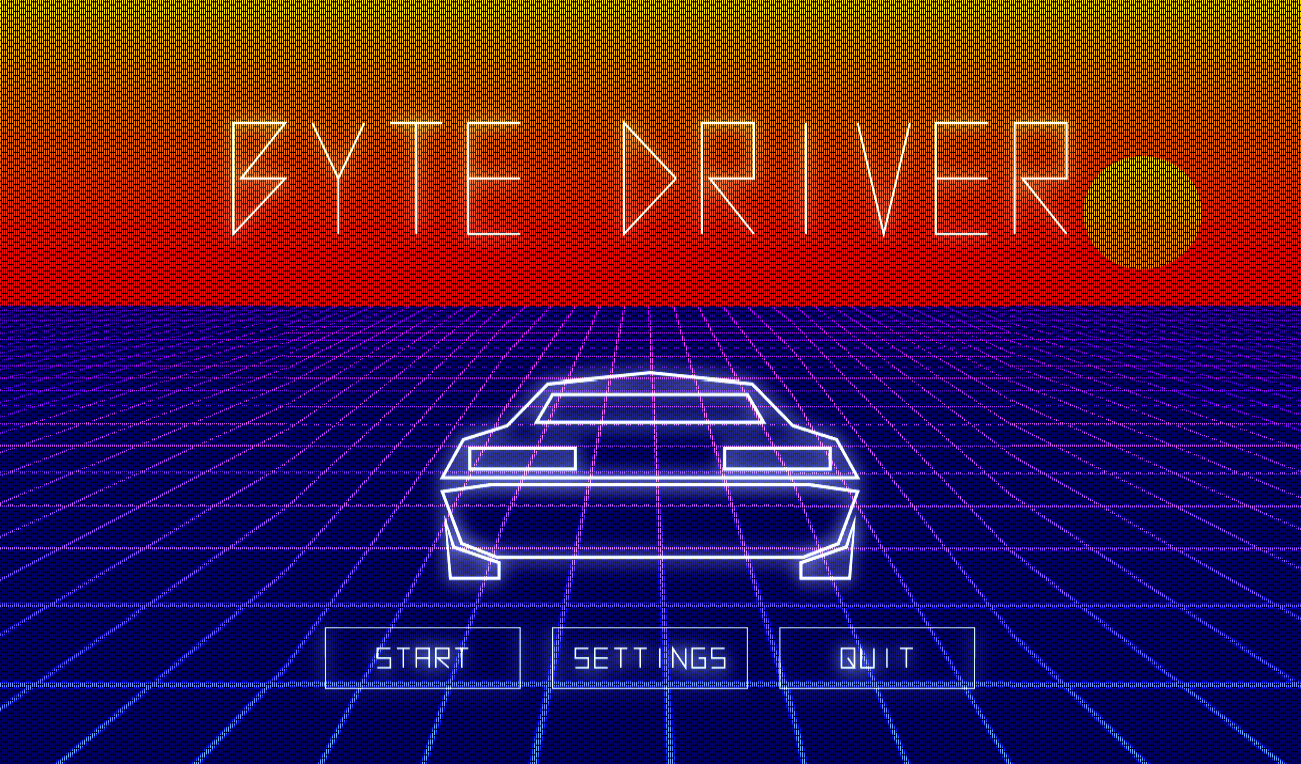 Though I might actually enjoy the audio even more, to be honest. The sound effects are perfectly suited for the implied era – like something ripped from a Vectrex console – and the little crackling “boom” sounds work so well with the little explosions made up of straight lines. But that soundtrack. Wow. It might be because I’ve recently started watching Stranger Things (I know, super late to the party), but I’ve come to really appreciate over the top synthesizer tunes and Byte Driver has plenty of that. I highly recommend checking out the soundtrack over on Bandcamp if you like this kind of stuff.

To be clear, it’s recommended that you play with a controller and I don’t have one for my little ol’ MacBook, so I was using the keyboard and touchpad. So while I did have a fair bit of trouble splitting my focus while controlling my cyber car (i.e. I smacked into a lot of walls), you might have less of a problem if you’re able to play with the recommended tools. That said, I still had fun!

Byte Driver is basically made up of two things: driving and hacking. Driving is handled with the mouse/touchpad/controller and acceleration and breaking are a simple matter of holding a button and letting go of that button, respectively. Hacking is also pretty straightforward as you just have to keep vehicles lined up inside a targeting reticle long enough for the “hack” to automatically complete, then select one of a few different items and upgrades from the menu to power up your own car. That or you can launch a remote hacking device to do it for you, which is definitely easier but has the downside of disabling your own close-range hacking abilities until it returns. You can refill energy to (hopefully) prevent destruction, improve acceleration or traction, temporarily unlock a speed boost, fire lasers, and so on. 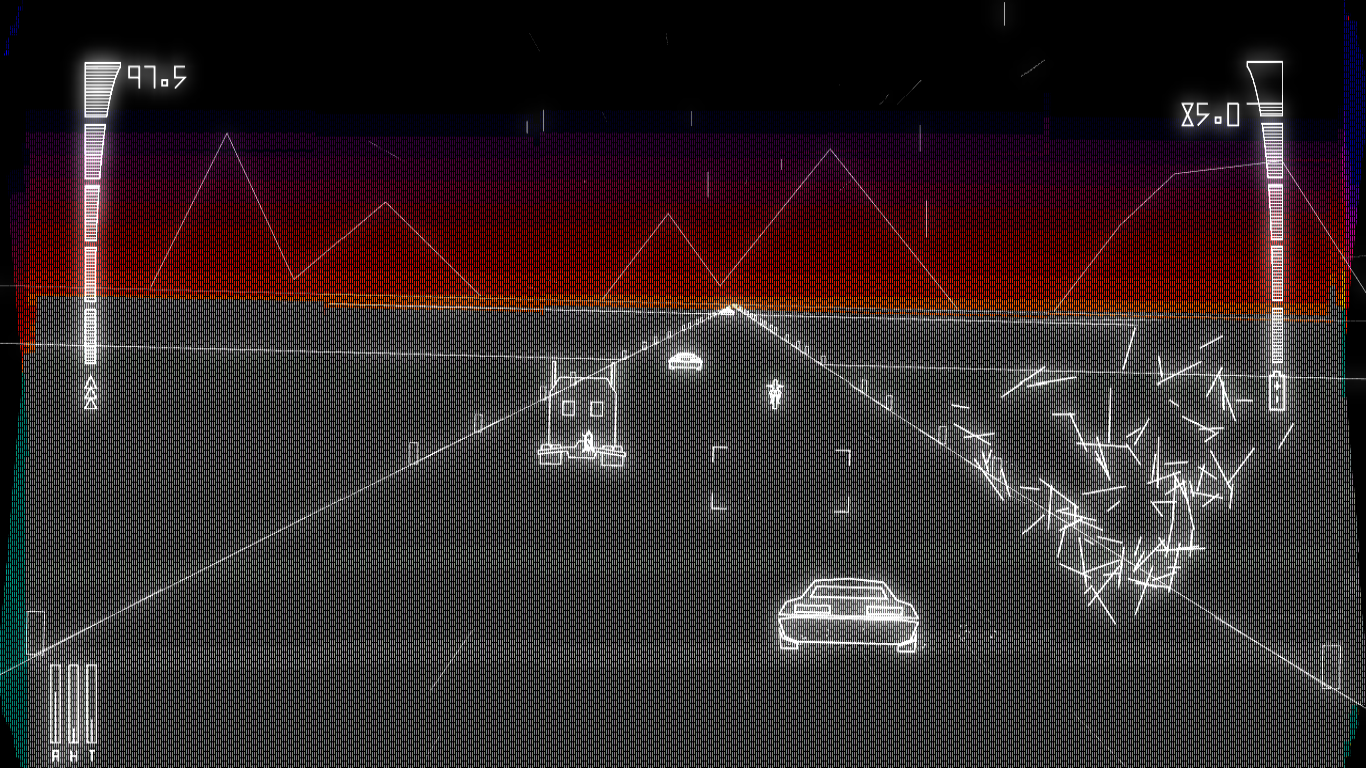 All of this is, as I said, pretty straightforward. What makes it so tricky is handling both the driving and the hacking at the same time, with no way to slow down or pause the action. I mean you can slow down the car but then all of the other cars will likely zip too far ahead for you to hack them. A pretty balanced touch is needed to maintain a decent speed, target other vehicles, prioritize what to hack, avoid the edges of the track, and not get hit by whatever hazards might be getting tossed at you. All at once. Did I mention that this is a challenging game?

I’d be writing Byte Driver off as a cool but frustrating throwback/homage at this point, but then there’s No Stress Mode, which is basically just the same thing except you can’t run out of energy and die. I love this addition because 1) it doesn’t condescend to players who want to try it or who can’t quite deal with the default game – guilty – and 2) it’s a fantastic way to practice for as long as you want without frustration. This made more of a difference to me than I’d expected, since it made my issues with splitting focus between driving with a touchpad and hacking with a keyboard  practically nonexistent. Well okay, the issues still existed but they didn’t matter because I couldn’t die. Point is I had more fun experimenting in No Stress Mode, which has me looking forward to diving back into the game proper to see how much longer I can last when my energy actually is finite.

All in all, Byte Driver is a fun challenge that doubles as a heartfelt homage to a quasi-fictional era where every computer was a separate digital reality and the sun always set in a slightly oversaturated gradient. Yes I might be letting my enjoyment of the aesthetic (both audible and visual) affect my opinion. No I don’t care.