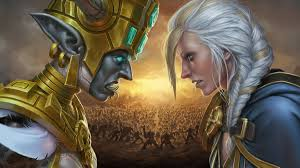 By playing World of Warcraft, players can actually earn real money, just by selling in-game items through an online platform called Eldorado. It is a next-generation market for in-game items and currencies such as WoW gold and it is available for quite a lot of games. Eldorado provides 100% trading protection, accurate delivery-time tracking, 24/7 live support, and automated selection of best offers.

World of Warcraft is a Massively Multiplayer Online Role Playing Game released by Blizzard Entertainment in 2014. What really catch the players’  attention around the world is the amount of choices you can make in the game, starting from the faction, race, class, gender, and serves to choose from. There are four servers in the game : PVE server, PVP server, RP server, and RP-PVP server. There are thirteen race options in World of Warcraft. Six are Alliance and six are Horde, with panda race available to both faction.

Raid is a structured series of fights designed for large amount of players and it is one of the hardest challenge in the game. The raid is made up of eight bosses that have unique and interesting mechanics. some bosses can really put up some fight with the players, some with unique way to defeat the boss such as moving around the environment while dealing damage to the boss and also keep the group alive by healing them. even though past raids might have a few boring fights but each encounter is becoming more challenging and intense.

Some boss might take few days to beat but top players admitted that it is very enjoyable and it is a memorable victory. The game doesnt let you unlock the full potential of your gear that easily, so you have to finish a lot of world quests for the AP needed to level up the gear. This shows that the game doesnt give anything away easily without big effort associated with it. you’ll mostly see other characters in dungeon finder parties, randomly grouped together by the game from a cross-server pool, disappearing once the dungeon is done. you don’t have to play alone. This is a massively multiplayer role-playing game, after all. There are people. You just need to find them.

World of Warcraft has  a community filled with experienced players that are willing to help those who just started the game. Some players went there and find the forum to be very informative and helpful. Don’t be in a rush to get to the end game. Yes, we know it’s all exciting and new and what friends you may have are in the top levels or whatever. But all that stuff you want to rush through is content, it is lore, and it is meaningful. Read the quests. Explore the world, there are books scattered here and there in otherwise empty cabins or whatever and they each have something to say. By doing that, you will be able to enjoy the game to its fullest and enjoying its full content, because you might just get in love with the game.

A Detailed Guide: Everything to Know About Skill-Based Games

Masquerada and the Heart of the Queer Family