Nicholas Joseph Fury, holding a wet plate in one hand and a soapy scrubber in the other, stood at the sink next to a superhuman but practical blonde who waited for him to sing another verse to The Marvelette’s “Please Mr. Postman.” But he sang nothing; he had been game enough to illustrate his point with the few lyrics and Motown moves already demonstrated, except now the woman’s grin and sidelong glance warned him to tread with caution. The smirking woman knew, as did Fury himself, that it was a bad idea to give her any more ammunition for teasing, even if he did secretly delight in it.

Fury had been working for S.H.I.E.L.D long enough to be already tired, his existence constantly bone-weary; he was tasked with training up a greenhorn named Coulson who was disconcertingly quiet most of the time even if he seemed to have a good head, and more importantly, gut; after everything that had happened in the past few days Fury was worried the stakes for the continuation of human existence were reaching impossible heights, and the same went for several other species newly discovered and barely comprehended by the heretofore grounded government agent. Fury was drained. But he was also relieved, and furthermore was a guest in the Rambeau household and the recipient of a much-needed home-cooked meal and so was repaying Maria her kindness with the smallest and most banal return of favor. Nick Fury was doing the dishes.

Maria Rambeau, the woman at whose sink Fury was currently dish-scouring, was entertaining her other guests in a small dining room off of the kitchen. Sitting on the staircase was Monica Rambeau, Maria’s daughter, a precocious girl with a bright smile and unending depth of compassion who would resemble a superhero if it were not for her status as a sixth-grader. Perhaps the most interesting person in the Rambeau house was the one nearest by, the previously mentioned sarcastic blonde woman who proved with recent events to be the kind of heroic that myths were made on. 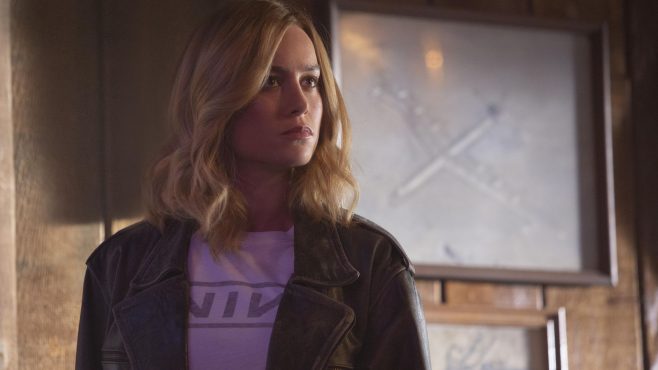 Carol Danvers is an excellent drier of plates, displaying fine talent as a dish-racker, but she is equally known for the role she played in almost singlehandedly kicking the ever-living snot out of a group of marauding aliens bent on interplanetary invasion and discriminatory warfare. She also saved Fury’s skin at a time when the ally/rival relationship between the two was still murky and unclear. Since then, Danvers has been one of Fury’s constant companions, nevermind that said incident happened mere days before this impromptu dinner party. Life comes at you fast.

She’s lately come to remember herself after a prolonged and manipulated lapse of memory that left her with only brief flashes of her past life and an abbreviated version of her own name. The bulk of the credit for her return to self goes to the ministrations of those who know and love her best, as well as to her own drive and resilience, but Fury’s proud to have helped connect enough dots to get her to Maria and Monica; proud to have met her at all. She likes him too, and would confess to feeling very protective of him, admitting so without words by retrofitting a pager to provide Fury a direct line of communication with her while she’s literally anywhere else in the universe. She gifts this to him cautiously, having been burned by a mentor before. Not enough, though, to completely forgo the strength via vulnerability that’s served her well until now. Still, she clarifies, it’s “just for emergencies.”

Vulnerability as strength is something Fury understands. In the kingdom of the blind, the one-eyed man is king. Fools think of vulnerability as weakness, a thing to seize upon and exploit. When you teach someone how to fight with one arm tied behind their back, what happens when they’re finally set free? Luke Skywalker throwing away his weapon in the final showdown with his corrupted father was what stirred Vader’s heart to protect the boy from the Emperor’s wrath and come back to the light. Recently Fury had seen another father adapt himself profoundly to reconnect with his lost family. Watching him timidly reunite with his displaced child, made shy by time and distance, was enough to make Fury and his compatriots readjust their own opinions of a war that seemed clear-cut just days before.

These were the strong ones: the general working with the “enemy” and doing whatever it takes to get back to those he loves; the new guy going against direct orders when instinct warns that something’s not quite right; the soldier who stops fighting for the wrong side in an unjust war; the kid getting back up when she’s knocked down, over and over and over again. There’s nothing heroic about washing the dishes, of course, though refusing to offer when given room and board for the night would certainly be showing one’s whole entire ass in the face of hospitality. No, Fury knew he wasn’t a hero. But damned if he didn’t know one when he saw her.