Here’s an age-old question that never fails to break the ice: if you could have superpowers, what would they be? Would you opt for a classic like flight, super strength or invisibility? Perhaps you’d venture off the beaten path and go for something like perfect marksmanship, or Sherlock Holmes-esque detective skills. Everyone has an answer for this question, so next time you find yourself struggling to make friends in a crowd, there’s your opening gambit.

We’ve done a little talking here and we’ve come up with a communal answer: we’d very much like to be Batman. Now, we know what you’re thinking: Batman might be a superhero, but he doesn’t have any powers. Well, that might be true, but he does have a vast array of cool gadgets and weapons at his disposal, and we’d take most of those over any boring old flight power. Specifically, we’re big fans of Bats’ grappling hook; we’ve vaulted over many a crim in Batman: Arkham Asylum and its sequels, and we’d love more opportunities to test that gadget out.

Unfortunately, we’re not Batman. Fortunately, there are plenty of games out there with grappling hooks, and some of them happen to be excellent. Stickman Hook is a new game from French studio Madbox, whose previous titles include Tribs.io, West Gangs and Dash Valley, all of which have proven pretty popular on mobile platforms. Stickman Hook is no exception; the game’s managed to amass over 20 million downloads across both iOS and Android, and it’s consistently placed within the Top 3 apps on both platforms. 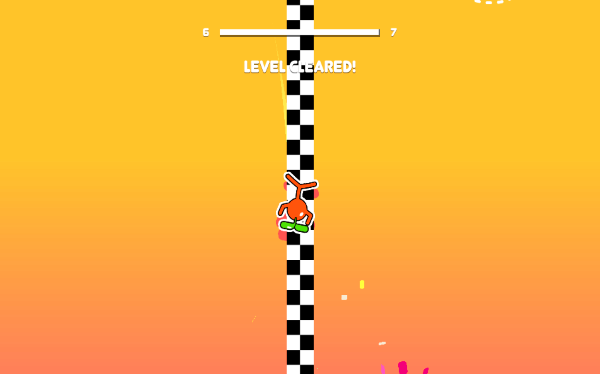 With all this success, you’d be forgiven for thinking Madbox might rest on its laurels and simply port its games across to the web for a quick buck. Not so, though: Madbox has pushed the boat out and created an exclusive web build for Stickman Hook, which you can play here. The web build is a pretty transformative experience as far as Stickman Hook goes, so although the levels are quite similar, you’re getting a different game in terms of visuals and presentation.

Stickman Hook has always been a game built on its gameplay, so it’s a pleasure to report that the central mechanics make it over to the web build unscathed (and perhaps even improved). It its core, Stickman Hook is kind of a platform game; it’s a 2D title in which players make their way from the left side of the stage to the right, using momentum to propel themselves forwards. Of course, Stickman Hook isn’t a conventional platformer, and it’s here we come to that central mechanic.

The grappling hook is everything in Stickman Hook. You’ll use it for traversal, you’ll use it to stop yourself flying headfirst into hazards, and in a few of the game’s cleverer moments you’ll even use it to surmount obstacles for which you’d never think a grappling hook would be useful. Never was a game more aptly named than Stickman Hook, for you are indeed a stick man and you must indeed use your hook for the majority of the game. 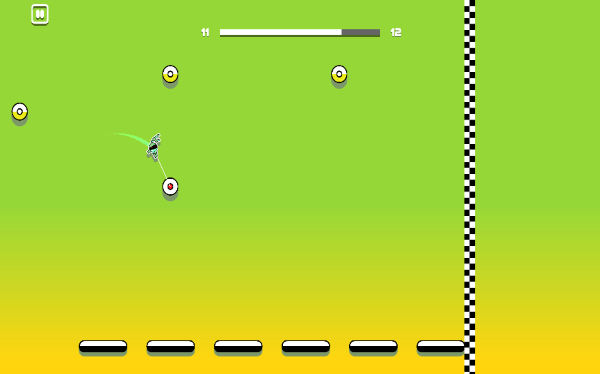 Luckily, the level design is smart enough to compensate. Stickman Hook is a clever mixture of momentum-based platformer, physics-y puzzle game and Spider-Man style swinging freedom simulator. Early levels are easy enough, gently introducing you to the game’s core mechanics, but it’s not long until the difficulty is ramping up and you’re swinging from point to point, desperately hoping the route you’ve planned out for yourself will bear fruit. There’s a particularly clever moment involving a vertical wall early on in the game that sets the tone for the rest of the experience, and was the moment we knew we loved Stickman Hook.

For those who do love the game, there’s plenty of it to love. Extras are fairly bare-bones – there isn’t much besides a series of unlockable avatars, and they don’t do much other than alter the aesthetic of the titular character – but with close to 150 levels on display the lack of extras really isn’t a downer on the game. There’s enough here to spend plenty of time with Stickman Hook and never grow bored, mostly thanks to the variation in design but also owing to the game’s peerless animation and presentation.

In summary, Stickman Hook is a wonderful experience. Its smart level design, effortlessly enjoyable central mechanics and surprisingly lengthy campaign all contribute towards it being a mainstay for us; we’ve probably spent more time with Stickman Hook than we have with a lot of new games we’ve really been meaning to get round to. True to its name, this is a game that hooked us good and proper. It’s not for the faint of heart – there are a few moments of more than punishing difficulty – but overall, it’s a joyous experience.

Final Theosis is a Sin