The stories behind Star Wars games are often as exceptional as the sci-fi/fantasy epics themselves. We’ve heard many a tale, yet there’s one game that hasn’t had half as much said about it. Star Wars: The Force Unleashed – not the one you know from you Xbox 360 and PlayStation 3, but an altogether different, remarkable version brought to life with features 7th gen gamers never saw. Today, we’re shining a light on the work of none other than Krome Studios, who took a game that broke 7th gen hardware, and made it sing on the PlayStation 2, PlayStation Portable and Nintendo Wii.

I had the opportunity to sit down with game’s creative director Steve Stamatiadis and executive producer Lindsay Parmenter to finally learn the story behind this seemingly impossible to achieve title. This is the story of Krome Studio’s Star Wars: The Force Unleashed.

Krome studios is a rare breed. With a list of titles reaching as far back as the 90’s, they’ve weathered multiple console generations, crafting several well received titles. However, Krome had mostly stuck to action-platformers and movie tie-in games, making the proposal by LucasArts, searching for developers to help with a “30th Anniversary” Star Wars game, all the more surprising.

“We assumed it was a port, but then they said they wanted to hit the same story notes, but have unique elements on each platform, so we got to make our own Star Wars game,” Parmenter explains. ”Which was pretty cool for us!” Stamatiadis adds, recalling the early days of the game. Their pitch was a tireless several weeks worth of work, featuring not only lightsaber combat, but a proof of concept for flying around in a starfighter. Thoroughly impressed, Lucas Arts brought them on to bring the Force Unleashed to 6th gen hardware. 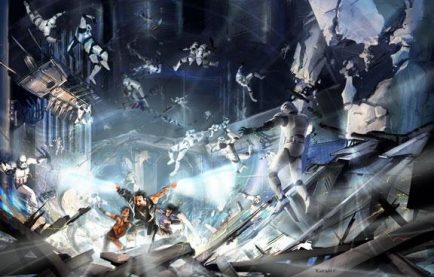 However, the game certainly didn’t release on the 30th Anniversary of Star Wars.

“They were developing a lot of really cool new tech for the game, so that took some time,” Parmenter elaborates. Understandable, given George Lucas had insisted the Lucas Arts team produce the entire game engine from scratch – which would prove an unexpected boon to Krome. “It meant that we got to take the lead on a few more elements, and we also worked a lot from their concept art and design docs.” With time to explore Lucas Arts’ designs in their own way, Krome was granted the freedom to implement features a more rushed production cycle never would have permitted – including a whole new platform: the Nintendo Wii.

Contrary to popular belief, the Wii was not initially planned, despite its lightsaber-ready controller. “We actually pitched the Wii version to LucasArts. We had a basic version PS2 game running with some pretend motion controls to show them how it would work and LucasArts loved it,” Stamatiadis explains. “The Wii just felt perfect for a game with lightsabers. So we had to push to add it.”

Thanks to the easy breathing room, both the PSP and Wii versions were also blessed by additional content. “‘And then we […] made a Power Stone-lite multiplayer mode for Wii. Steve loves that game,” Parmenter adds, with Stamatiadis simply answer, “True.” However, it wouldn’t match Power Stone’s player count. “Wii was [two-player] because we wanted to do a [two-player] fighting game and thought it fit well with flailing limbs and wiimotes,” Parmenter explains. Probably saved a few sprained wrists – those lightsabers are tricky, and nailing them on early motion control tech wasn’t any easier. 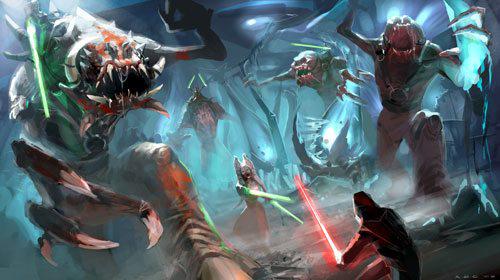 “The Wii never had the ability to do 1:1 saber control because it was before Motion Plus,” Stamatiadis explains. “So, it was all about reading what the players actually did when they thought they were doing a move. And working off that.” Parmenter concurs, “Trevor Powell was the lead engineer on that and he did a fantastic job.” Force powers proved easier to implement, with Parmenter joking, “Lightning was the easiest across all 3 platforms because it had nothing to do with physics.”

Additional power mechanics soon began to form, such as Force push summoning a maelstrom of nearby objects at a target, and they all have a very familiar root – “The movies,” Stamatiadis explains. “Always the movies.” With apparently “heaps” of ideas drawn from across the two trilogies. Within time, one of the few motion-control empowered brawlers began to form on Nintendo’s latest console.

While Nintendo fans got to mix their Force powers with Power Stone thanks to the work of Stamatiadis and Krome Melbourne, Krome Adelaide was hard at work bringing a full console game to PSP with even more jam-packed in. Historical Missions that revisited moments from the films, an Order 66 horde mode, and a dueling mode full of Jedi and Sith to contend with. It was a lot to ask of a handheld game; along with an even larger-scale multiplayer.

“PSP was more a Deathmatch style multiplayer – so [four] players,” Stamatiadis adds, which was no small feat among many great successes. ““They were also bloody great at the polygon cut down,” Parmenter recalls, “[doing whatever was] needed to make it run. A bunch of really talented guys; mostly ex-Ratbag staff. PSP was required to have some unique content, so it was a bit walled off. We had a lot of fun putting classic movie moments in. There was some discussion on adding some of these to the Wii version, but it ended up not being possible due to the time and money constraints.” 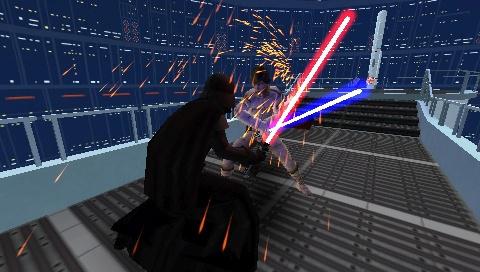 “I was the Senior Producer on all 3 platforms – directly ran the PS2 team that did the heavy lifting on story mode; and then I had great producers in Adelaide and Melbourne – David Knott and Mark Coombes in Adl and Mel respectively – who I worked with closely. The production team assigned to our platforms at LucasArts were fantastic as well, and they came out to our studios quite frequently for us to work on the product (and have a beer or two). Dan Wasson in particular – he’s at Wargaming now.” Not only that, but the mastermind of the game, Haden Blackman, worked alongside them to help canonize and flesh out their additions to the next step of the Star Wars saga.

“LucasArts were hands on but also very supportive of us. We’d pitch our design ideas and then we’d finesse it with their input. They’d make sure that what we did always fit their vision of what the story was. It was great safety net. For example the Jedi Temple and Cloud City design were all us but they made sure it fit in the context of the rest of the story,” Stamatiadis notes, elaborating further regarding the Krome build’s three exclusive Jedi Trials. “For example: NO Jedi ghosts. Not Force ghosts, [but] just plain old ghosts; they didn’t exist in the [Legends] universe. Originally they were sort of variations of the Dagobah tree trial; so more a mental thing, but I think it’s better to just leave it open [to interpretation].”

Beyond this, one of the main selling points was that Krome’s draft of the story was reportedly the entire beta-script before last-minute changes for 7th gen systems. When asked how much of the earlier draft was retained, Stamatiadis simply answers, “All of it.” with a smile.

This isn’t to say every step taken wasn’t without worry. For all their strides, the prospect of producing a fully-fledged Star Wars game weighed heavily on the studio. “At first, that [fear] made it hard to come up with new stuff but Haden and LucasArts were really supportive of us adding to the universe. We didn’t want to mess it up,” Stamatiadis explains. “EVERYTHING always went through the filter of ‘Is this Star Wars?’ But pretty much everything [was] always vetted way before they got to LucasArts.” 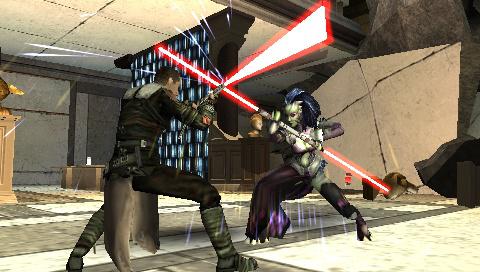 Other creative choices were driven by practicality, like the game’s use of fully in-game rendering rather than CGI cutscenes – a time saving measure that helped speed development. Several set piece moments were apparently scrapped across both versions, but would later be used in The Force Unleashed II.

Both versions of The Force Unleashed released across all systems in September 2008 – a decade ago, this year – to general, if divisive, praise from critics, but has remained a die-hard favorite of many Star Wars fans. While LucasArts’ HD incarnation has held the majoriity of the spotlight, Krome’s ambitious incarnation has outlived the hardware it was built upon, being supported on both PS Vita and Wii-U via backwards compatibility. Where some were disappointed at a Wii and PS2 not quite matching their next-gen brethren, many found a game that holds its own.

That said, their most triumphant moments were when all that work paid off. When asked about highlights from development, Parmenter answers, “The first time we had the destructible hallways working; and then about a month later showing that off to the LucasArts executives.” “And the first time we got to hear the music,” Stamatiadis adds. 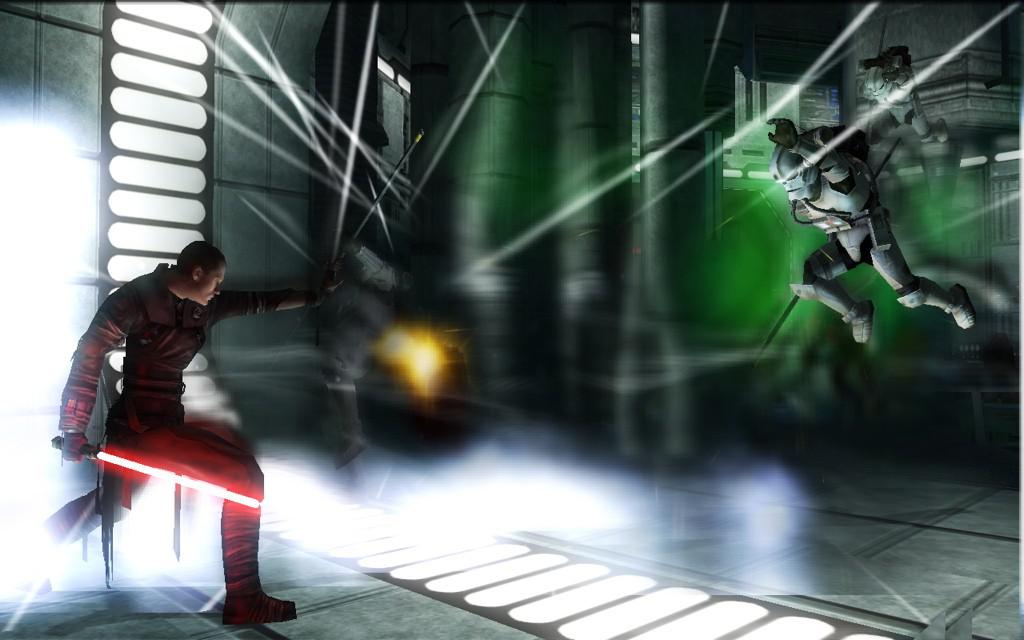 “Basically the first time we did any element of the game was pretty sweet,” says Parmenter.

“And toys got made of characters we designed!”

“Yeah, that was even cooler.”

Since those days, Krome has carried on as one of the longest running game studios. Making the leap from consoles, they’re now focused on mobile and PC, resurrecting their famous TY the Tasmanian Tiger series on Early Access with fan input. Though their days of exploring the galaxy may be concluded, they recall those days fondly while looking towards the future. If in a very Krome, very Australian way. “A million monkeys on a million typewriters,” Parmenter replies with a wink.

Would the Real Dark Troopers Please Stand Up
Previous Post