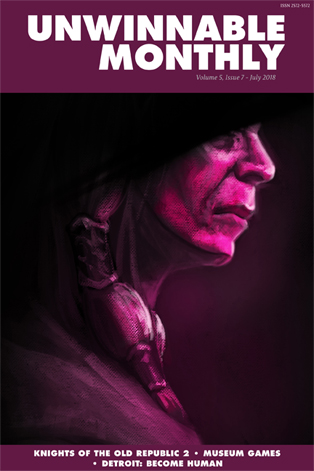 This is a reprint of the Letter from the Editor from Unwinnable Monthly #105. If you like what you see, grab the magazine for less than ten dollars, or subscribe and get all future magazines for half price.

I hope summer is treating you well, or you at least have a good air conditioning system to help you make it through.

Speaking of hot, let me tell you about this month’s issue (see what I did there?). For our cover story, Katherine Cross delivers a brilliant essay about Kreia from Knights of the Old Republic II, arguing that she is a nuanced and compelling portrayal of female power. The amazing Oscar Joyo, apparently specializing in portraits of people in hoods (his last cover was Assassin’s Creed Origins), is back for the cover art.

Our other features are just as good. Daniel Fries takes a look at videogame museum and ponders what they say about how we interact with art and the spaces that hold it. Malindy Hetfeld, meanwhile, comes out hard against the systemic racism apparent in Detroit: Become Human despite (or perhaps because of) best intentions.

As ever, we’ve a big old pile of interesting columns for you. Gavin Craig worries about the wold ending while he’s on vacation and Megan Condis is moved by the Mr. Rogers documentary. Astrid, of course, hauls in another catch of quality (read: brutal) metal albums. Brock Wilbur checks out the ur-survival horror game Sweet Home, which is anything but in all the best ways. Deirdre, meanwhile, hates the beach and prefers to stay in the air conditioning with her pal Spyro the dragon.

Corey Milne takes God of War to task for the ways in which it colonizes Norse mythology.  Matt Marrone barely has time to even write his column because of all the Snake vs. Block he’s playing. Yussef Cole wonders why cyberpunk, for all its themes of oppression and resistance, never travels to the hood. I explain how Dungeons & Dragons is often both a gateway and the end-destination, and how that kind of sucks for all the tabletop RPGs that aren’t D&D. Sara Clemens is still amped about The Terror, particular the way its sound design conveys its horror.

Rob Rich points out that Superman’s Clark Kent isn’t as ridiculous as you might think. Adam Boffa digs into the troubling political gestures of Justice League. Jason McMaster gives us one final essay about his cats and mortality. Finally, we chat with monster artist Dominic Black.

That should get you through to August. See you then!

When the Pros Take Over