Where does Dexter Morgan find the time?

First off: I’m not done with Dexter so don’t spoil it for me. Also, I recognize from the little I have heard, that my growing concern about the quality of the show as I approach the latter seasons is justified.

As the sheer number of near misses, coincidences and lucky breaks during Dexter’s ever-widening murder spree transition from entertaining to annoying, I am, for now, still on board with it.

But the one thing I can’t reconcile – a sharp pebble on a mountain of carnage I somehow keep getting caught in my shoe – is Dexter Morgan’s miraculous time management.

He skirts suspicious cops. He fools his own sister. He lies and cheats and steals and kills and brushes himself off and nothing seems to stick. Sure, he’s smart and skilled and lucky and eventually has to get caught (right?), which is enough to make the show work I guess, but still it just doesn’t add up for me. So how is it possible? It’s not possible for the reasons the show ostensibly provides – amazing luck, skill, smarts.

No, it’s possible because for Dexter Morgan, there are approximately 64 hours in a day.

That’s a ballpark estimate of course. Someone much smarter than me – perhaps in a post that lives right now on Reddit – has calculated, in “Groundhog Day” style, the exact amount of time Dexter would need to:

In a scene I recently watched, one of the homicide detectives, Angel Batista, gets suspicious because his wife (and commanding officer) Maria LaGuerta is late coming home for dinner. The dinner is still in the oven and he’s still awake, but it’s enough for him to believe she’s having an affair and yadda yadda yadda drama ensues. A little over the top, sure, but, ya know, real life. 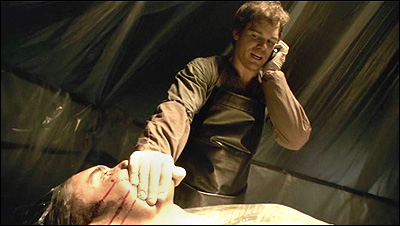 I am married with a 2-year-old. I can’t just run off whenever I want to without reason or permission – ever. Not once. Once would be a huge scandal. If I have to work late – even if it’s a half hour or so – lives must be rearranged. Dexter, though, can swing in and out whenever he feels like it, meanwhile getting enough other stuff done that would take a person with nothing else to do several days in ideal circumstances – give or take a day, depending on rush-hour Miami traffic. If I have time to dress, feed and drop my kid off at daycare and mail a letter on the same morning, it’s a win. If I also drop off dry cleaning, it’s a goddamn triumph. But by the time I picked up my iced coffee as I raced to the train, Dexter would have become bosom buddies with a serial killer and his family, wrapped a victim in plastic, photographed a crime scene, did blood spatter analysis using dummies in his lab and came home to pour cereal and squeeze fresh grapefruit juice for his kids.

Imagine what else he could accomplish if newborns only required five minutes of his day instead of 10!

Yes, I know, it’s a show. But I can’t recall another where the protagonist is so profoundly untethered. We all used to joke about 24 following Jack Bauer in real-time. When does Kiefer eat or piss or just pass out? But in comparison to Dexter, 24 is a documentary. During the rare moments they show Dexter wrapping a room in plastic or chopping up corpses into chunks and transporting them as he talks to the ghost of his dead father, I feel my anxiety spike. Not because of the horrible things he’s doing, or how close he is to being discovered at any given moment, but because I’m too busy obsessing over how fucking far away that remote warehouse is from his office or his next crime scene – either or both of which he needs to get to, like, right fucking now.

But not, of course, before he stops off at home, relieves the nanny, mails a letter, takes a leak, drops off his dry cleaning, spends five full minutes he can’t possibly have with his infant son and vanishes, again, from the face of the earth.

Losing a Friend You Never Met