Bloody, gruesome, and so much fun, Happy Wheels is the kind of game you would hide from your grandparents. Sure, this game is inappropriate but in the best ways. Happy Wheels is a sarcastic play on words because there’s nothing happy about trying to avoid death while racing through a sadistic obstacle course on a bike, wheelchair, or Segway.

The whole point to Happy Wheels is survival—but as a horribly ill-prepared racer, like a bicycling father or a wheelchair-bound old dude. The obstacles are challenging and brutal, which means your character could absolutely lose a limb and leave blood trails and bloody chunks in their wake. Or, they could die a terrible death in a split second, with decapitation and crushing high on the list of ways to die in this game. You never know what an obstacle might do. There are even a few instances where your character might get shot, stabbed, run over, or plain decimated by an angry road-rager. Yikes. 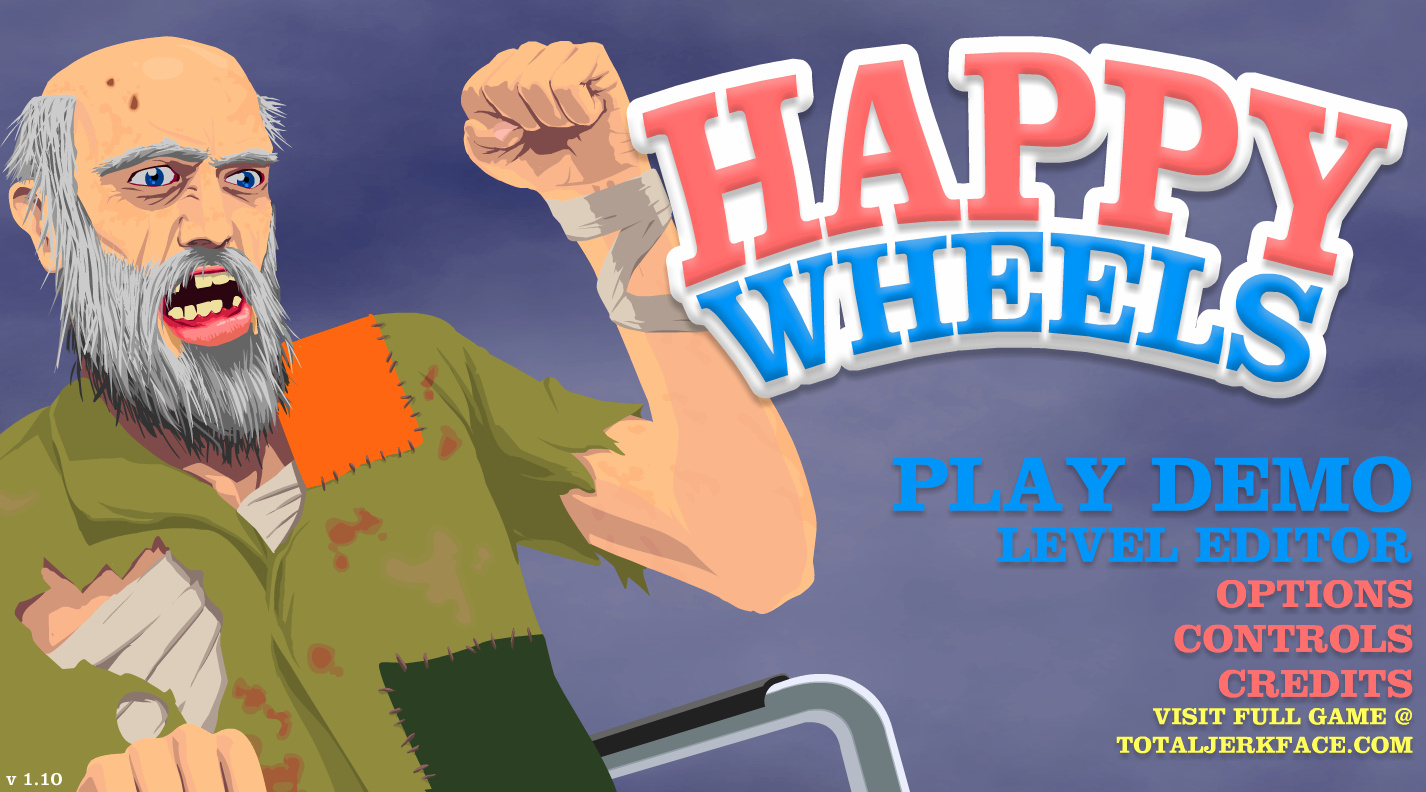 So, if Happy Wheels is so inappropriate and yucky, why do we love it and play Happy Wheels on Poki? Because it’s like a dirty little secret. Something that you keep hidden from authority figures that might give you a sideways glance and question your gameplay motives. The violence is graphic, no doubt—but the arcade stylings and intense challenges are enough to have you hooked in minutes.

The creator of Happy Wheels made this game to be unique in its funny ridiculousness. He was tired of seeing the usual racing games, where characters would fall off their rides and harmlessly bounce a bit, like ragdolls, on an obstacle course before the game would start over. He wanted blood, gore, and a reason to play the game over and over again with a different, unexpected, often funny outcome each time. And that is where Happy Wheels was born. He wanted you to laugh when your character died multiple times instead of throwing your keyboard in gamer frustration.

Happy Wheels is a twisted physics-based game that—dare we say it—can be scientifically educational. This is the kind of game that combines dark humor and sadism with some degree of educational value, regardless of how small.

While most levels are unrealistic, there are some gravitational instances that would apply to real-life science. For example, where some racing games feature quick gameplay where characters ride too fast and never lose grips on their bikes, this game sends characters soaring over handlebars or into bone-crushing obstacles. There’s something a little more…real about the weight and difficulty of gameplay in Happy Wheels.

One of the greatest things about Happy Wheels is how interactive it is. And by that, we mean how you can use The Level Editor to create your own levels, then load them onto the public server for millions of fellow gamers to play and rate. Right now, there are well over 5 million user-made levels, each with a different set of hilarious deaths and objectives all their own. These levels have been played over 13 billion times, and each play deserves a rank; ergo, you can climb to the top of the Happy Wheels heap with a level that resonates with your audience.

You don’t have to have a degree in, or even basic knowledge of, graphic design to edit levels in Happy Wheels. There are lots of tools and instructions on how you can use them to make your gameplay a little better. The only stipulation is there must be an end game. You can’t make a level of kills and thrills without an objective or a finish line.

Levelling the Playing Field One Bonus Abuser at a Time

Cybersports – Countries That Are Leaders in eSports
Previous Post