Hello there, Dear Reader! We are doing something a little different with this week’s comics column. We usually tell 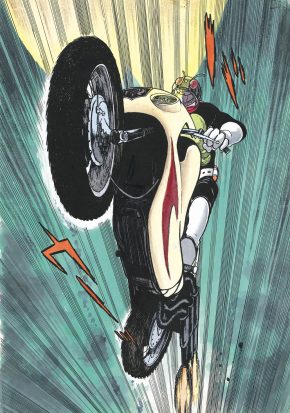 y’all what comics tickle our fancy but this week, we’re going to ask you for some suggestions. Recently, I’ve been reading Shotaro Ishinomori’s Kamen Rider. I first came across his work in Nintendo Power’s The Legend of Zelda: A Link to the Past comics. While reading Kamen Rider, it’s dawned on me how much of a blind spot manga can be to me and it bums me out!

I’ve loved comics for as long as I can remember. I started with Star Wars, G.I. Joe and Batman comics when I was  young and eventually graduated to comics like Mike Mignola’s Hellboy, Jack Kirby’s New Gods and Katsuhiro Otomo’s Akira. Growing up, manga wasn’t as readily available as it is now. I remember getting issues of Dragonball, Ghost in the Shell and Hayao Miyazaki’s Nausicaä of the Valley of the Wind but the market wasn’t anything like it is today.

I missed out on a lot of manga and I want to read more. Anytime I look at the shelves in a comic store or a major book store, I find the number of titles and the number of volumes of each title to be intimidating. I don’t even know where to start! I’ve read the books above and I have Skullman at the ready once I’m done reading Kamen Rider.

So what’s next, Dear Reader? One Piece? Bleach? Codename: Sailor V? Let us know on Twitter. Hit up @Unwinnable and me @IanGonzales with your favorite manga series.