I finally saw Black Panther and found myself distracted in the theater. I’m not great about seeking out non-white creators and non-white stories and I’m trying to get better at it. When elements of another culture find their way into my purview, it has historically been a pretty big deal. I’m trying to do better at this. Please don’t tell my wife that I’m a mostly boring white dude. I’ve tried to cultivate a very progressive image and if she knows I only read Tom Clancy she’ll realize I’m just a Dad in disguise.

I finally saw Black Panther. Afro-Futurism has been a recent obsession of mine and getting to see an advanced technological society where an African country is full of space ships and magnet railways feels both exciting for being new and disappointing for being a vision of science fiction that I have never had the chance to share.

And that got me thinking about Prey.

Prey is an IP that got bought and re-invented and is something very personal and exciting for me this year, but the original game, from 2006, remains one of the most fascinating cultural artifacts I have ever encountered. And re-evaluating it now requires me to re-evaluate where I was a decade ago.

Prey’s release in 2006 ended an eight-year production, in which it passed between directors and studios and game engines. What happened in between is nothing that I can speak to aside of this: some of the (white) folks behind Duke Nukem 3D, which held a title for excellence in first person shoot ‘em up (however temporarily), wound up leading one of gaming’s most prominent survival horror adventures. Genre aside, Prey also represents one of the greatest conglomerations of ideas in a single game and a tremendous series of creative risks.

Tommy is a veteran who works as a mechanic. He visits his girlfriend Jen at her bar. He’s a dude who knows weapons and self-defense, but maybe lacks an appreciation for heritage in the same way that lots of people from my generation don’t give a shit about heritage. Honestly, that feels like a reasonable place for any story to start.

What happens next remains one of the most visually and emotionally successful introduction levels in a game. During last call at the bar, aliens invade and start sucking everyone up into a spaceship. You know; normal bar stuff. You and your girlfriend, Jen, and your grandfather Enisi, and everyone else you know are pulled into the sky by an beam of light. You recover consciousness in an alien facility where every person you’ve ever known is strapped to a series of conveyor belts. Human screams pierce the room no matter where you venture, not that it’s up to you where your body goes next.

These people, your people, are filtered through systems in an otherworldly factory. Your grandfather cries out to you just before an almost hilariously overwrought series of tubes and pipes pierce every part of his being, sucking out his blood and organs in a visceral display that guarantees you know that you are beyond redemption.

Some kind of creature breaks the chain of your undoing. Now free, you use a wrench to melee murder your way through the UFO, but you’re not facing off against other super-soldiers, you’re just fighting the alien mouse monsters that occupy the sub-levels of the ship. Before you can even try to grab a real weapon on the scale of weapons one might expect from a videogame, you find a mind-bending world of dynamic portals.

Much like the game Portal, and developed years before that game’s release, Prey offers tiny one-dimensional entries into parts of existence that shouldn’t make sense. The most incredible of these early pathways introduces you not only to the idea of teleportation, but to the concept of transition. You walk through a portal and find yourself upon a small planet, while a gigantic alien shouts at you. It’s a shock to discover that you have changed size to the point that a general baddie cannot fathom what to do with you. He runs away and teleports elsewhere onto the orb you occupy, thereby teaching you how completely disconnected you’ll be from the rules of any journey you undertake. The next few direct narrative levels introduce segments of object gravity, gravity bending rooms and even portals in and out of the concept of reality.

Your character audibly shrieks at the world that he’s experiencing at every turn. And he’s right.

Prey is a pretty damn good shooting game. Prey is a bizarre collection of ten years of brilliant concepts all thrown together into one package. Almost none of them would ever be touched on again.

This starts with your collection of acquired weapons, which includes small creatures you toss at enemies and explode as brainsuckers. There are rockets that hunt and truly alien approaches to hallway combat. All of this set in a world that can have a room full of eight kind of characters/enemies experiencing three kinds of gravity on more than one scale. There are classic 3DRealms moves, like tearing an alien’s hand off so you can use it for rooms that require a hand-scan to enter. And there are more elaborate design choices, like security cameras that let you know what you might be facing in the next room or where your next objective lives. There are reality altering platforming puzzles and unbelievable amount of expectation reversal that keeps the ten-plus hours of narrative story fresh. Any game could offer a bunch of functions; Prey offers a bunch of ideas. Where they come from gets complicated.

Tommy, his friends and family are Cherokee Native Americans living on a reservation. When they start dying, they keep imparting family knowledge onto Tommy. Sure, probably, fine. When he winds up on the spaceship, a weird variation of a Native American character who springs him from the factory chain. It’s that first sort of ping of “Hey, maybe something ain’t great here?” An entire tribe grew over generations on this space station, and they are both informed by and descended from the Cherokee. Again, there’s this ping of “what’s happening here and is it above board?”

The Native American element isn’t just a passive story backbone: it is the point of the game. As Tommy progresses, he learns to spirit-walk in a way where his body levitates and, now glowing, can travel through walls. A hawk spirit-guide shows you where you should head next in complicated levels. When your health dips beneath a certain point, you drop into a spirit world where you shoot spirit birds to replenish your health and energy. The Cherokee experience is a gameplay function. That’s when Prey enters a place where it could have had good cultural representation, but holy fuck did it fall by the wayside.

The voice actors for the game were Cherokee descendant actors, who did press interviews back in 2006 about how they thought the game did excellent representation, but in the last ten years, our ideas about what counts as excellent representation have changed. I wish I could go back in time and ask them about the weird early third act, when Tommy has a near death experience and travels to the “Land of the Ancients,” an after-life in which dead Cherokee reside and where his grandfather’s spirit bestows powers upon him. Not to speak for anyone else, but I’m pretty sure that the spectrum of positive representation has moved the needle so hard that we can agree this is just a goddamned garbage fire.

But . . . I hesitate. The problem is, I don’t see this representation anywhere else. I don’t see Cherokee-futurism in any game or book or show around me. Is the mere existence of a genre a move forward or would ignoring this angle entirely be preferable?

The narrative of Prey winds up going to places. The intro abduction and processing levels will always remain among my most memorable in games. The next highest honor belongs to a gigantic twist near the end of the game, where the Big Bad steals Tommy’s girlfriend back and grafts her body onto a gigantic DOOM monster that tries to kill you while your girlfriend begs you to kill her. It’s a fuck of a thing and it’s just . . . one of those game moments that, especially in 2006, nothing could replace. Tommy winds up bringing down the hyper-intelligence at the center of the Sphere but, in the process, winds up taking over this living space station that houses just as much life energy as the Earth itself. 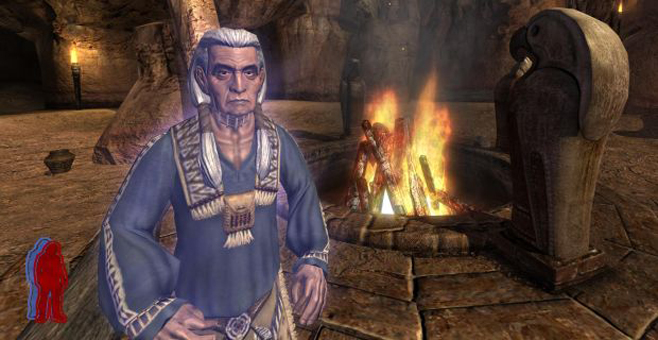 Prey wound up spawning a sequel that would never be seen, then the IP got sold off and an entirely unrelated Prey game got made. The Native American identity got lost in the shuffle, meaning any hope of redeeming the mistakes made here was lost. It’s an incredible loss as the first line-in for Cherokee representation. It’s a brilliant game that could have marked the future of so very much, and instead marks a point where developers reached for something slightly more than games deserved and missed the mark.

Art Bell, the famous conspiracy theorist, narrates a number of small broadcasts around the alien space station. I worried while replaying that white society was better represented here than anyone else. I worried I wasn’t getting any of the rest of this right. Then I read that in the earliest versions of Prey, Tommy’s character was named Talon Brave.

Aw hell naw. This was never good. This never had any other culture’s best interest in mind. This is a loss, through and through. What a waste.

Somehow, the post-script for Prey winds up being the same post-credit sequence as both Half-Life titles. An ethereal guide offers your character the option to meet with alien races who loved observing your work and might want to use you to help with their fight in the future. In both series, our last shot is you entering a portal and accepting a greater call to the hero’s journey.

The fact that both a Cherokee mechanic and a white scientist are both trapped out there in the infinity of gaming’s extended universes gives me hope. I would hope that more attention directed at this title, and the continuation of the extended IP, might spur some kind of change.

We don’t have to riot, we just have to be aware.