With the avalanche of video games releasing every day, it’s virtually impossible to experience them all. E-soterica spotlights the indie darlings Khee Hoon Chan and Alyse Stanley just can’t stand to see players miss, titles that buck convention or brave subjects rarely seen in the industry, or whose inexplicable strangeness begs gamers to stop and gawk. Come join us as we scour the corners of the internet each week to share with you what treasures we find.

February can be a lonely month for singles looking for love, but for those who don’t mind their dates being a little lifeless, there’s a place to go. Speed Dating for Ghosts proves that even the afterlife can get boring if you don’t have someone to share it with.

If speed dating’s not your idea of a good time, you can choose to hightail it before the evening’s events begin, returning to your home for a routine night of solo-dining (on the menu this evening: congealed ramen and hotdogs) and binge-watching TV. Hey, some people – dead or otherwise – just aren’t ready for commitment.

Players willing to try their luck can choose from among nine suitors, each one’s story digested quickly before the bell tolls and it’s on to the next. You soon realize not all ghoulies are looking for love. Some want to solve the mystery of how they were killed. Others hope you’ll join them in visiting still-living relatives. And some just want to rob banks.
This combination of absurdist humor with oftentimes touching stories of their time alive adds to each ghost’s humanity, even while their designs trend towards abstract representations of their personality or cause of death.

Developers Ben Gelinas and Mikey Hamm ensured a wide range of romantic tastes could be accommodated. Ghosts who stick to more typical undead modus operandi manifest in forms that scare the living, like Spooky Peter’s wispy, top hat-clad shadowy figure or the Lady in the Smoke’s sooty tresses. Others have forms indicative of their defining character traits. As is the case with the sweat-laden Kyo, whose anxiety only increased in the afterlife and who begs the question, what happens when a ghost is afraid of itself? 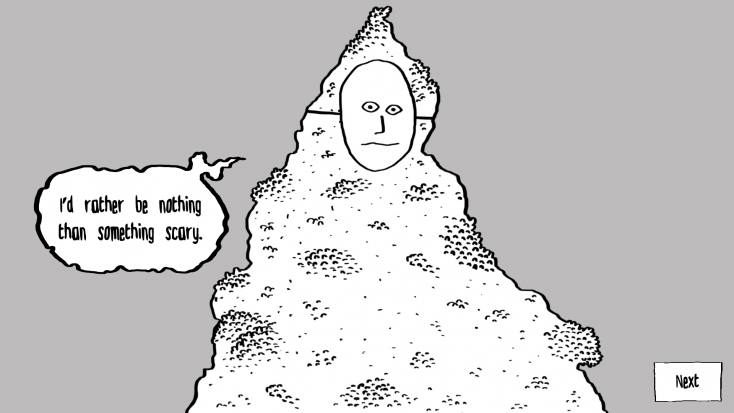 After the mixer, you get the chance to take each spooky suitor out on a proper date, triggering vignettes that reveal more about their lives both before and after death. Among the more predictable haunts, and I mean that both in the metaphorical and literal sense, are truly affecting stories that force you to ask yourself: what would you do if given the chance to start over?

Take Hattie, a doting elderly ghost who sees her afterlife as a chance to help those still alive at the retirement community where she passed. Her experience there wasn’t the best, she admits, but at least she can give the patients a bit of peace in their final moments. “There is more,” she whispers into their ears, “just you wait.”

Then there’s Steph, so dissociated in life she didn’t realize she’d died. After being diagnosed with terminal brain cancer, her health suddenly improved and doctors said she would survive. By that point, though, she’d focused on her imminent death for so long that planning a future seemed paralyzing. Her abrupt entrance into the afterlife only further smothers her in possibilities. “It’s like I have to learn how to walk again before I can figure out where to go,” Steph describes the experience.

It quickly becomes clear through these episodes that dying doesn’t make someone a new person. Emotions powerful enough to drive us forward through daily banalities – our fears, determination, vengeance, or compassion – leave deep grooves behind. Soul-searching means stepping away from the familiar, a comfort many aren’t willing to give up.

Which is why each evening ends with the reveal of your date’s tombstone. Among tidbits about the dates of their lifespan and the method in which they died (if you haven’t already coaxed that out) is a simple moniker: “The Ghost of…” They are either defined by this quality in death as they were in life, or they learn to grow past it. Things are looking bright even for the most stubborn of suitors, though; it takes a lot of courage just to put yourself out there.

Speed Dating for Ghosts is currently on Steam and Itch.io for $9.99 by itself and $11.03 when bundled with its original soundtrack.