I was a pretty lonely kid. Not that I didn’t have friends, I did, but I lived out in the woods and hardly ever had anyone to play with unless we brought them in. I think this is a major factor in my love of games. I love to own games – board and otherwise. I love to open the boxes and to be greeted by the bright colors and the smell of plastic and cardboard. I think, somewhere deep down, young Jason associates this feeling with playing with friends. On that end, Through the Ages: A New Story of Civilization, delivers.

Through the Ages comes with a lot of plastic bits, cards and cardboard. Hundreds of cards and little blocks represent your entire existence from Antiquity to Modern Day and each piece has at least one purpose. This is a very busy game. While compact, the contents of the box fold out and represent a rather sizable play area, though modular. There are a lot of components.

Many of the little blocks and pieces represent workers and trade goods, which is the heart and soul of any worker placement style game. In a worker placement game, players don’t use dice or anything outside of shuffling to perform their randomization. Each piece is placed on a specific spot on the board, and when it’s time to produce, each little worker makes whatever they’re tasked to do. Some famous examples of this are Puerto Rico and Caylus.

Worker placement games are very popular because they don’t rely on luck, or not much luck. On the other hand, they usually have more complex systems. Here’s where Through the Ages hits a bit of a snag. Without saying it isn’t a well-designed game, or an overall enjoyable game, Through the Ages can be an overly complex, tedious game. In fact, teaching people to play has been my biggest hurdle to getting this game to table. I want to discuss the issues before we talk about the good. Let’s go into some detail.

The first thing that stands out to any new player is the sheer volume of rules. There are a lot of them. I don’t mind that at all, on average, because a lot of games have minutia that you have to wade through. This isn’t that. The game morphs constantly. For instance, the first round of the game doesn’t play like the rest of the game. When teaching people how to play a game, it’s really helpful if the rules build on themselves. “Hey remember last turn when you paid those points for that upgrade? That still works, but you can do this as well!” That’s how I like to teach people a game. Not “remember last round? Don’t. We never do that again.” This leads to confusion. 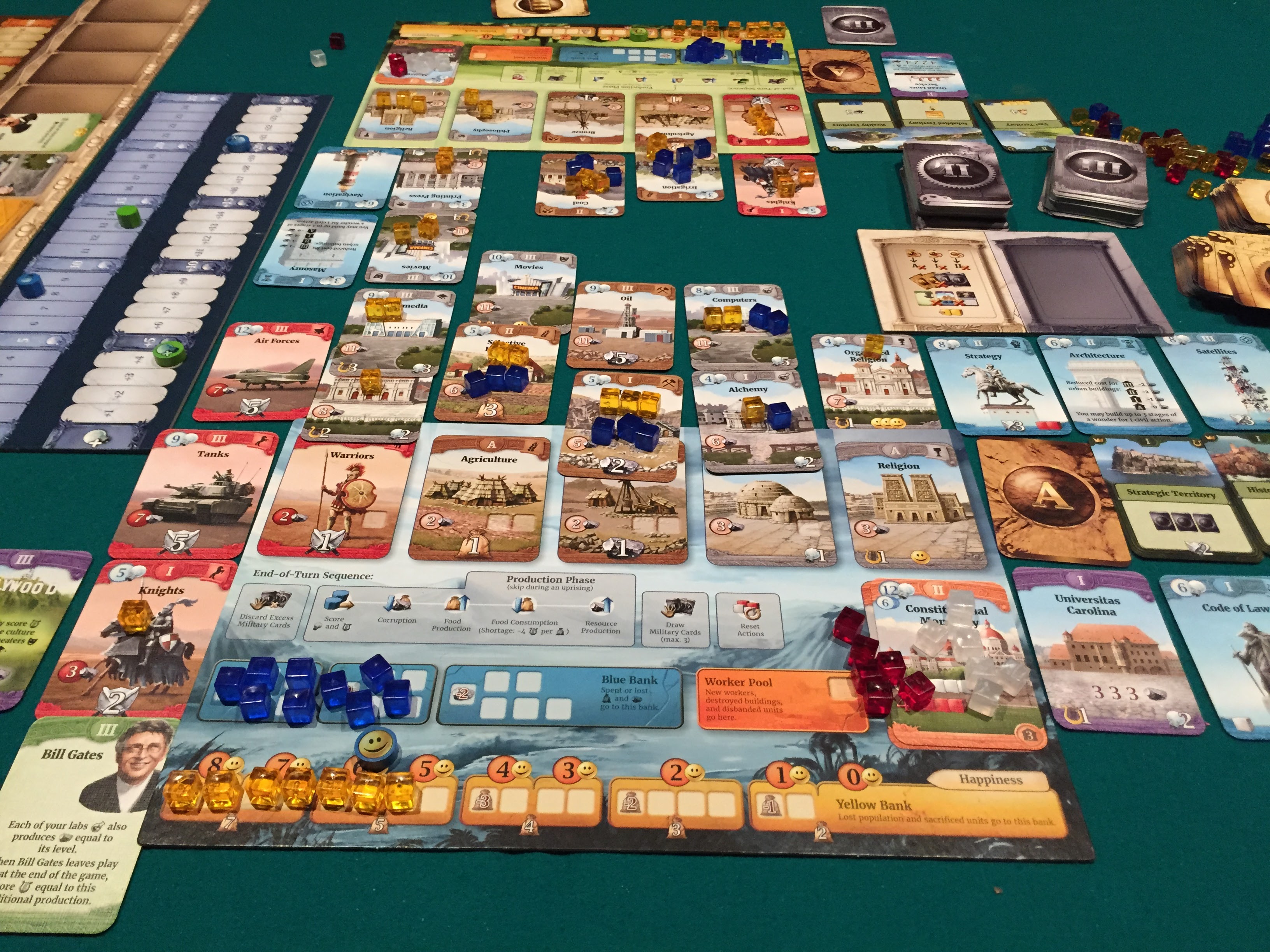 Length of play doesn’t help matters either. The box says something like 90 minutes. Let me go ahead and just say that this game is never going to be 90 minutes. In multiple attempts at playing, the most we’ve made it is towards the end of the second age. There are three full ages and a mini-age that starts the game. We usually hit this point at about two hours of play. With two people.

Finally we get into the game systems. This one is the easiest to forgive, but can be an issue to new players. You see, most of the game takes place on card mats that have specific places for you to place your upgrades and manage your workers. You also have a hand of cards you draw from an ever-moving line of upgrades, representing the march towards the future, and a hand of cards for military purposes. On top of that, you have the military board that tracks your strength and tactics. For new players, it’s easy to get caught up managing your workers and doing peaceful upgrades. However, that’s not all that goes on. There are wars and territorial conquests that lead to bonuses for the victor and, well, bad stuff for the loser. These mechanics are part of the politics phase, which shows up after a few turns, and are mostly insulated from the rest of the game. There are quite a number of systems that seem to operate this way – showing up for a small circumstance and then disappearing to, possibly, never be seen again. It only takes one or two of these little events to make a new player glaze over and not want to engage.

That said, and I realize that’s one hell of a “that said,” Through the Ages is a very popular and well-loved game for a reason. Though it might have a lot of systems, the way they work together is very elegant and presents a board game that evolves and moves throughout play in ways that are refreshing and unexpected. The volume of cards and scope of the game add an intrinsic replay value that you don’t get with a simpler offering. I often find myself drifting away to the thought of playing another round, even if I only make it halfway through before my opponents feel like throwing in the towel. That’s why I find myself in a weird position. I’m going to do something I never do, wouldn’t even usually imagine doing. I’m going to suggest the App version.

Recently, Through the Ages: A New Story of Civilization came out on the various App stores. I also believe they are looking at a Steam release. This release fixes a lot of issues I have with the basic game. It has a fantastic tutorial, deals with all the components and never screws up the rules. If you own the physical game, you can use the App to learn how to play or to better understand the game. Then, if you feel particularly froggy, you can jump online and challenge friends or strangers.

I want to like and suggest Through the Ages because I love board games. And I do like it, just not enough to attempt to explain it again. Being able to sit down and enjoy a game with friends and family is a blessing a lot of us don’t get as often as we like, if at all. The next time you get a chance to do so, skip Through the Ages and play something easily accessible that you all can enjoy. Conquering the world can wait for your next commute or visit to the doctor. Keep your head out of the rule book. Revel in your family and friends.

Through the Ages: A New Story of Civilization

Magician, Persona, and the Weight of Nostalgia

The Space of Water