All good things come to an end, my friends, and this is the end of our Christmas mix tapes. For six years, Ken Lucas and company have scoured the world for obscure Christmas songs to spice up your holiday season with a bit of that Unwinnable Attitude ™. We can say with scientific certainty that there are no other good holiday songs out there, so we are quitting the battlefield of the War on Christmas. This year, Ken has put together a farewell mix, combining some of the best selections from years past and the few remaining new songs he could find. We’re all huddled in the Uwinnable fallout shelter, enjoying these tunes, as well as the bellicose Santa art from our friends Francesca Berrini of Unusual Cards (our header) and the mysterious Zombie Gentleman (inline below). With that, we hope your holiday season is warm, bright and filled with nuclear fire. Happy holidays!

Curated and Mixed by Kursse

“A Christmas Duel,” by Cyndi Lauper & The Hives

“Christmas Time (Don’t Let the Bells End),” by The Darkness

“Dead By Christmas,” by Hanoi Rocks

“A Christmas Fucking Miracle,” by Run the Jewels

“Ain’t No Chimneys in the Projects / God Rest Ye Merry Gents,” by Sharon Jones & the Dap-Kings

“Santa’s Got A Bag Of Soul,” by Soul-Saints Orchestra

“Rudolph, the Red-Nosed Reindeer,” by Billy May and his Orchestra

“Isn’t It a Pity?,” by Her Majesty’s Orchestra

“Santa Claus,” by The Sonics

“All I Want for Christmas is My Two Front Teeth,” by Dread Zeppelin

“I Wish It Could Be Christmas Everyday,” by Wizzard

“This Christmas,” by Dismemberment Plan

“Father Christmas,” by The Kinks

“A Winter’s Tale,” by Queen

“Merry Christmas (I Don’t Want to Fight Tonight),” by The Ramones

“Santa Doesn’t Cop Out On Dope,” by Sonic Youth

“Red Right Hand,” by Nick Cave and the Bad Seeds

“Burn The Flames,” by Roky Erickson

“Twas the Night Before Christmas,” by Henry Rollins 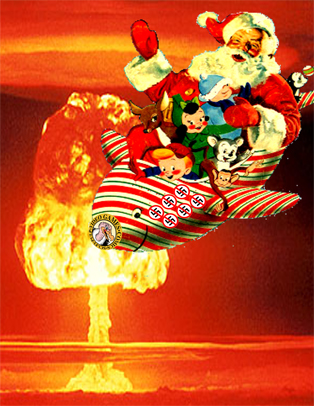 “A Christmas Duel,” by Cyndi Lauper & The Hives

With “Thank God It’s Not Christmas,” from the 1974 release, Kimono in My House, the Mael brothers Russel and Ron bring their typical tongue-in-cheek humor to this powerhouse Christmas song. Conjuring visions of decadence and elegance, Sparks never lose sight of what make a great Christmas song.

What is there to say about Misfitsmas? They’re a short-lived, holiday-themed Misfits parody band. You’re either going to love it or hate it. If you hate it, you have an ally in someone whose name begins with D and ends with G, who used a cease-and-desist to erase them from the internet. Unwinnable holiday mix tapes are probably (are you ready for this pun?) the only place you’ll find their Christmas remains. Happy Holidays, fiends!

“A Christmas Fucking Miracle,” by Run the Jewels

Christmas songs are supposed to make you feel happy. There are, of course, darker-themed Christmas songs that work to mock and deride the saccharine nature of the holiday. “A Christmas Fucking Miracle” creates a new path, one full of foreboding and dread with a faint ray of an uplifting and hopeful message throughout. “ACFM” is like forcefully dragging average people through It’s a Wonderful Life at 70 mph from the back of a rusty sleigh down an icy, unpaved road.

“Rudolph, the Red-Nosed Reindeer,” by Billy May and his Orchestra

Because sometimes you need a guy yelling at you and some harsh Bossa Nova horns to pep up your Christmas.

“Isn’t It A Pity?,” by Her Majesty’s Orchestra

For years, Ed Donahue has recorded a full album’s worth of original holiday music, performed by him and his musical cohorts, under the name Her Majesty’s Orchestra. This slightly creepy tune is about Santa Claus becoming trapped as he tries to enter a Santa-proof home with a chimney that is too narrow for his rotund frame. It is sung by the equally amazing Olivia Mancini, who is involved in far too many musical endeavors to list here. However, I will name one, because together, Ed and Olivia are a musical dynamo. I strongly urge each and every one of you to check out their fantastic folk-rock act where they perform as Ed & Donna.  They released an eponymous debut album earlier this year which reveals the disgusting amount of talent these two have.  Enjoy!

Even if you think the humor in the song is juvenile or obvious, I think you have to admire just how thorough and thoughtful “Merry Muthaphuckkin’ Xmas” is. From the Rudy Ray Moore intro, to the dumbass “All I Want for Christmas Is My Two Front Teeth” parody, to a version of “12 Days of Christmas” with farty backing track, to the final refrain wishing you a “fucked-up new year,” Eazy-E leaves no stone unturned in his quest for the ultimate expression of yuletide depravity, and the whole thing actually hangs together pretty well considering.

Santa Conquers the Martians is hilariously awful movie and the credit sequence song, “Hooray For Santa Claus,” will forever be on EVERY Christmas playlist I ever make. The movie is definitely required viewing before the true awesomeness of the song is realized. Just remember that Santa is better than just delivering gifts and joy; he can dispatch some Martians too. Merry Christmas.

“I Wish It Would Be Christmas Everyday,” by Wizzard

With the idea that Christmas is the best day of the year, the key to a Christmas song is pulling out all the stops. In the early 1970s, glam rock was the most produced form of rock and the fashion surrounding it was the modern-day equivalent of cosplay. There is no way you can mistake glam rock for anything but rock and roll. Wizzard, fronted by Roy Wood (founder of The Move and Electric Light Orchestra), released the anthem-like holiday song “I Wish it Could Be Christmas Everyday.” The song featured backing vocals by the Stockard Green Bilateral School First Year Children’s Choir. That is pretty much the definition of ‘pulling out all the stops.’ 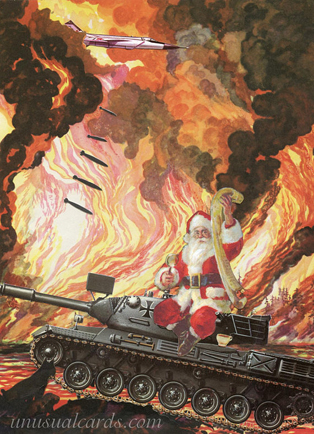 “Father Christmas,” by The Kinks

“Father Christmas,” the 1977 single from legendary British rocksters The Kinks, is a fine pop slob of holiday goodness. Young British thugs want money as opposed to presents from a department store Santa that they beat up. No matter how snarky Ray Davies can get with his lyrics this track always puts a smile on my face!

“Christmas (Baby Please Come Home)” is the perfect Christmas song. The original Darlene Love track is so full of frantic emotion that it’s been a tempting fruit for many an artist to cover. These covers have met to varying degrees of success.

Cincinnati Rhythm & Bubblegum band, The Guitars, released their own cover of “Christmas (Baby Please Come Home)” on their 2009 EP, A Very Guitars Christmas and it’s one of my favorite renditions of the song. Reminiscent of the original classic, The Guitars’ slightly slow the song down, only to pick up the pace towards the end. It’s both familiar and fresh – a lo-fi, low key cover that conveys the same sense of longing Ms. Love did by that final, heartbreaking refrain. Enjoy and Merry Christmas!

“A Winter’s Tale,” by Queen

Recorded by Freddie Mercury in one take sometime in his final months, “A Winter’s Tale” is a stream-of-consciousness observation of one winter moment that’s also a small rumination on a whole life almost lived. As the holidays are so often a time for reflection on the year that’s past, a meditation on the end of the things seems fitting. Especially one that still finds room to revel in bliss.

Around two in the morning last Christmas, I found myself in a dive bar in Manhattan with some colleagues. The jukebox was playing some saccharine carol, the bartender was drunk, there was woman passed out face down on the bar and a throng of impossibly large Swedes were huddled in a circles, slurring their way through an endless rendition of “Feliz Navidad.” In my head, though, the boozy refrain of the Murder City Devils’ “364 Days,” was playing. Should you find yourself celebrating Christmas someplace you’d rather not be this year, this song is for you. And if you are lucky to be just where you wanted, consider leaving Saint Nick a finger of whisky for his troubles, instead of the same old cookies and milk.

Yeah, I know. It’s not an Unwinnable playlist unless Don manages to

shoehorn some prog rock into it.

Given the band’s history of in your face atheism, I’ve always assumed Bad Religion’s Christmas Songs was supposed to be some kind of snide joke. The thing is, the whole album soars. It makes my little secular heart beat a little bit faster, a testament to the power lurking in some songs of faith. Since its release, it is the only thing that consistently gives me a dose of Christmas spirit. So, maybe the joke is on Bad Religion?

At any rate, “O Come, O Come Emmanuel” is my favorite lick off the album, if for no other reason than it is in E minor, and E minor songs are inherently better than all other songs.

“Merry Christmas (I Don’t Want To Fight Tonight)’” by Ramones

The really great thing about a lot of Ramones material is how well it speaks for itself. Case in point: “Merry Christmas (I Don’t Want to Fight Tonight).” The title says it all, especially if you’ve had a Christmas like that.

“Santa Doesn’t Cop Out On Dope,” by Sonic Youth

This song appeared on the Just Say Noel compilation released in 1996. The Youth, in typical fashion, bring out the noise for a cover of Martin Mull’s (yes, really) Santa Doesn’t Cop Out On Dope. Everything you expect is there from Thurston Moore’s trademark whine to Lee Ranaldo’s squeal and they succeed in delivering the message that Santa is the ultimate kingpin dealing joy, sugar plums and presents.

“Red Right Hand,” by Nick Cave and the Bad Seeds

He’ll wrap you in his arms

Tell you that you’ve been a good boy

He’ll rekindle all the dreams

It took you a lifetime to destroy

He’ll reach deep into the hole

Through this disappearing land

But hidden in his coat

Is a red right hand

how is that NOT Santa?

“Burn The Flames,” by Roky Erickson

All I know is I heard something about a Christmas ghost in the lyrics and that was enough for me to include it on the mix. Besides, Roky Erickson is absolute genius through madness.

The name says it all.

Supernatural Encounters of the Strange Kind