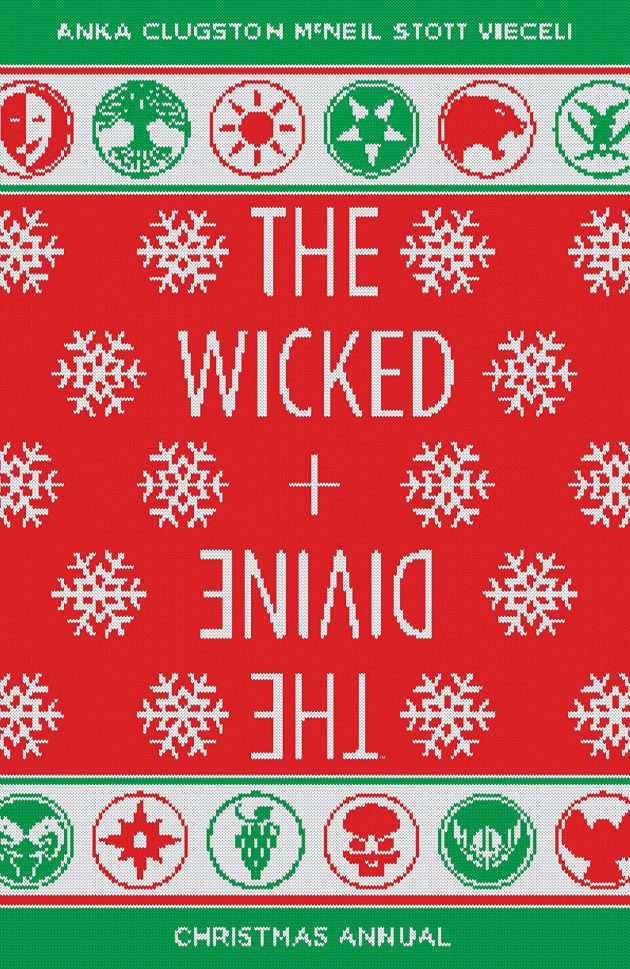 The Wicked + The Divine: Christmas Annual #1

After the incredible twists and turns of issue #33 of the WicDiv main series, I was looking forward mightily to the little slices of happiness that were promised with the series’ first Christmas Annual. Unfortunately, I didn’t end up liking it all that much.

“Watching people have sex is like watching people eat,” my 8th-grade math teacher once said. Why did he say that to a room full of 13-year-olds? To downplay the coolness of pornography? Why were talking about pornography as a group to a middle-aged man? What does any of that have to do with algebra? Who the HECK knows? Anyway, it’s boring, is what he meant.

While my own forays into watching people have sex have proven Mr. Pearlman wrong many times over – and incidentally I can have a pretty great time watching people eat, depending on the circumstances – I have to say I agree with him when it comes to 4 of the 7 stories in this issue. It opens with Baal and Inanna gettin’ down, then Lucifer and Sakhmet post- gettin’ down, then two stories later we get Luci and Laura with some gettin’ down innuendo, and finally everything wraps up with Laura and Baal gettin’ down before gettin’ in to a brief bit of pillow talk.

I dunno, I’m sure many people will be glad to have these little slices of sexy life to savor, but I came away from these stories feeling like nothing new was added to my knowledge of these characters. All of these details were ones I had already sketched in and even taken solely as escapism, each scene left me cold. I just felt like I was intruding somehow.

That’s not to say we should throw the baby out with the bathwater. Three of the stories I enjoyed very much, starting with an adorable flashback to when a pre-Pantheon Baphomet met a nearly unrecognizable pre-Pantheon Dionysus (that beautiful, lustrous hair and beard!) while hitching a ride to one of The Morrigan’s concerts. Baph loves/ed puns, a small detail which nearly broke my heart, and Dio was already committed to making as many people in his orbit as happy as possible.

There’s a beautiful scene, also heartbreaking, between Tara and Ananke that digs deep into what it means to be an artist and the terrific yearning to connect that can come with the territory (could Fucking Tara be my favorite?!), and another that shows the pre-Pantheon friendship of Lucifer (née Eleanor) and Amaterasu (née Hazel). Luci was always a bit of a shit, turns out, though the look on her face and her quiet “I’m sorry” once she realizes her childhood friend is also of the Pantheon is obliterating.

Looking back over what I did and didn’t like about WicDiv’s first Christmas special, I suppose it’s time to admit I’m simply all in for the tragic. Truth is, the scenes of sexytimes mostly served to remind me who’s dead, and no amount of reveling in their earlier romping is going to make me feel better about their being gone. Merry Christmas, I guess!

No really, a sincere Happy Holidays to you and yours. See you back here for The Wicked + The Divine: 1923. 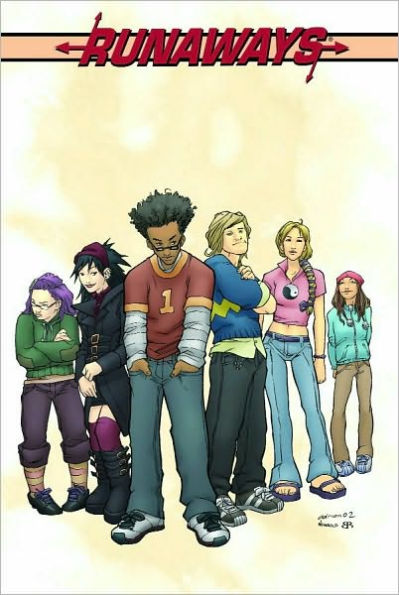 The early 2000s were an interesting time in my ongoing and almost lifelong relationship with comic books. After having been broken up with mainstream comic books made by the Big Two companies for four years I decided to give it another shot in the early 00’s. The breakup wasn’t anything personal really, both of us just went in different directions in our lives during my teen years. Mainstream comics were interested in clones and chrome covers, I was interested in sex, drugs and rock n’ roll, and sometimes I achieved rock n’ roll. The mid-late 90’s weren’t either of our proudest years, but growing up occurred nonetheless for both of us. What re-kindled the relationship with the comic books I grew up with was Marvel and DC finally simplifying and going in new directions. Writing became a focus, and at Marvel some great writers were being brought onboard. I was reading Brian K. Vaughan’s fantastic Y: The Last Man at the timeand was blown away by the story. When I discovered that he was writing a series for Marvel I had to pick it up. That series was Runaways, and it showed me that comics can still have fresh concepts, be fun and target younger readers while also being enjoyable for all ages and not feel dumbed down. With the new Hulu live action series up and running I decided to revisit the first collection of eighteen issues, and still enjoyed the heck out of it.

Runaways is the story of six childhood friends who have started to go on their separate teenage paths away from one another. Nerdy Alex, goody-goody Karolina, gothic Nico, jocky Chase, punky Gert and spunky little Molly now only see one another whenever their parents get together to hang out once a year. What they don’t realize is what it is their parents do when they hang out together. Once they discover their parents’ true nature they decide to run away from their respective homes, and the action and fast pacing doesn’t let up for eighteen issues.

What’s so refreshing about this series is the simplicity and economy of story. Since this was aimed more for a YA audience the world details and characters of the Marvel Universe are only lightly mentioned and brushed on to add color and flavor to the world, but the focus is on these new characters and their mission to stop their parents while also avoiding the authorities. Sure, there’s some hilarious character references but nothing that wouldn’t fly over the head of someone familiar with the movies, especially now.

Adrian Alphona’s art is appropriately colorful and slightly cartoony, to match the YA tone of this series. When necessary the art pops with whimsical detail and fun character designs, especially for villains introduced halfway through the arc. Even though they’re wearing street clothes I liked the detail that the repetitive nature of these clothese serve the same defining function as a superhero costume. Like many of us in our teens there were always those favorite articles of clothing that helped define us.

For someone looking to introduce a younger person to comics, or someone who’s not familiar with the construction and layout of comics, you can’t go wrong with this series. The typically R-rated Vaughan does a pretty excellent job with keeping things PG-13, even if a couple of concepts are more typical of his dark humor and may be questionable creative decisions, like goth girl Nico having to cut herself to activate her magical powers. While I’m scratching my head about a few of the departures from the comics in the Hulu series, (SPOILER) like the fact that they haven’t ran away yet six episodes in, I’m ok with Nico not having to unleash the Staff of One from inside her body via cutting (END SPOILER). Of course that may change too, but man they’ve done such a great job capturing Adrian Alphona’s visual aesthetic and Vaughan’s memorable characterizations that many of the plot road bumps early on with the first season are easily forgiven.

Thanks to the TV series Runaways is relevant again. Unlike a lot of Marvel series that date back 50 years it’s still a relatively recent and fresh concept from 15 years ago that grabs you in the first issue and doesn’t let go. Marvel managed to grow in the early 2000s in many ways, with books like Runaways, New X-Men and even Ultimate Spider-Man that introduced new and exciting teen characters to the Marvel Universe. Even though every couple of years they manage to take a few steps back with each step forward at least these magical eras of progress in the Marvel Universe will always be preserved to revisit and learn from. Marvel let me down this year with little new content to recommend, but at least now if I ever have doubts about my relationship with mainstream comic books it’s much easier than it used to be to read a classic issue online or read an old trade, reminding myself that another golden era is up ahead and everything is all right.