I tend to preach about tabletop games having arcing narratives a lot, but less explored is how messy these arcs can be between the start and the end. It’s true that many games have a near-perfect progression from humble beginnings to impressive climaxes, but sometimes we don’t want a perfect arc. Sometimes we want there to be bumps in the road to make the ride more interesting. Games that play around with dynamic pacing can be the most exciting, entertaining, and hilarious experiences you can have around a table. What happens when a game never stops being dynamic? You get something like Secrets, a deduction shell game on steroids.

The setup for Secrets is remarkably simple: You’re either on the CIA or KGB team, and you have to work towards getting your team the most points – represented by character cards – to win. But these same character cards can shift what alliance you’re on at the drop of a hat. Your allegiance is represented be a weighted chip in front of you, and certain character cards that you can get makes you or others to switch your chip with someone else’s under different conditions – sometimes without you knowing what you switched to, or even if it was switched at all. The Psychiatrist, for instance, lets whoever gets the card switch two other identity chips without anyone looking at them. This creates a chaotic, ever-shifting dynamic that never stops. 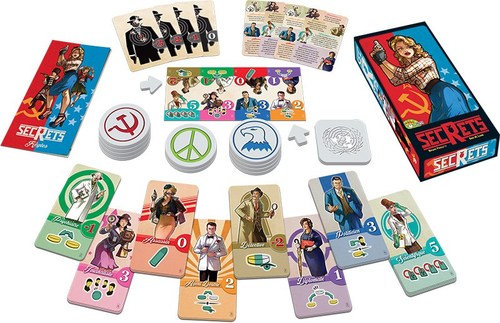 If you’ve played the shell game before, then you know what happens when the shells start shifting around: You’re so stressed out keeping track of where the ball is that you start to distrust your own brain as its location gets murkier and murkier. Now imagine a shell game where you have to keep track of at least six different balls, you only get to know where two of them are at first, and you sporadically get to see some of them at several points during a 15 minute period. Though it’s true that they’re not shifted around as quickly as an actual shell game, the same principle applies as you begin to wonder if you’re remembering who people are correctly.

The trick here is that the goal of the game is not to guess who everyone else is, but rather to play towards your goal and get a sense of where allies can be found. It’s okay if you lost track of a couple of players’ identities as long as you’re working toward your own goal successfully. But further complicating this is the fact that one or two hippies are always lurking among the identity chips. If a hippie gets the least amount of points out of everyone, then that hippie wins and everyone else loses. So you also have to be careful who you trust with negative points lest a hippie sneaks a win out from under everyone’s noses.

The way Secrets plays around with the concept of “trust” proves to be its greatest strength, because it’s constantly asking you to update your own mental spreadsheet of who to trust thanks to these shifting identities. The core mechanic that you use to acquire cards where you reveal two different characters and secretly offer one of them to an opponent requires you to be damn sure about who to trust and mistrust. And since this is a shell game, chances are you’re not going to trust the right people in a game, which creates hilarious moments by crystalizing these inevitable misunderstandings within the tangled web of secret identities and broken trust.

Secrets is exciting precisely because you’re never on stable ground as you fumble for the knowledge of who you can trust. Add in the usual lying, bluffing, and maneuvering that a social deduction game requires, and you’ve got an experience that explodes off the table with a dynamic boom.

The Board Soul – Focus

Revving the Engine – The SoulKeeper