I’ve been playing Dungeons & Dragons and other tabletop roleplaying games since I was in elementary school. Videogames have always offered something more visually beautiful than a pen and paper game could provide, but often at the cost of freedom. I think I will always prefer the theater of the mind, but the idea of standing face to face with a dragon in virtual reality? That might change my mind.

The SoulKeeper is an episodic VR RPG, the tip of the spear of a larger fantasy IP – a vast, dark world full of adventure and danger. HELM systems, the folks behind The SoulKeeper, know that developing an RPG, a type of game known for intricate mechanical systems, for VR wouldn’t be without challenges. However, their first project, more than a decade ago, was a total conversion mod of Unreal Tournament 2003 into – you guessed it! – an early version of The SoulKeeper. They’ve got staying power.

The mod was successful and received some recognition, including an IGF award nomination. Between 2007 and 2012, they developed their own engine, a challenging but rewarding experience. Still, the siren call of Unreal was strong. By 2013, they were back to experimenting with UDK/Unreal Engine 3. As many indie developers have found, developing an engine can distract from creating the worlds. Unfortunately, licensing Unreal was still out of reach financially.

That changed in 2014, when Unreal Engine 4 released. HELM started working with it on day one. Having had the experience of working with Unreal Engine since its first generation, as well as having gone through the effort of building an in-house engine, moving to Unreal Engine 4 was a natural transition. Ever since, they’ve been prototyping and developing The SoulKeeper as a single player open world RPG.

Virtual reality didn’t come until 2015, when the team began to experiment with Oculus. They were pleased with how their assets looked and how alive the world felt inside a VR headset. From that point on, despite the challenges it would pose, developing The SoulKeeper as anything other than a virtual reality game was unthinkable.

The SoulKeeper VR is currently available on Steam Early Access and coming soon to the Oculus store. Myron Mortakis, HELM Systems’ studio lead, took time out of working on a forthcoming update that includes new levels, game modes and monsters to talk to Unwinnable about the game’s development.

First off, let’s talk inspiration. What made you want to tackle a game like this in VR?

It was a very risky decision and, to be honest, it is still too early for us to know if we will be rewarded for it. At the end of the day, we see ourselves as a progressive company. We want to experiment with new and exciting things and we are unafraid to deal with the challenges they present. VR brings a lot of challenges, and nothing is guaranteed.

Nothing is standardized either, so it is hard to follow a “successful” formula. Up to less than a year ago, “experts” were advocating that free form locomotion is not a good practice for VR. They had valid points for sure, but the market dictated otherwise. Many games have been criticized for the lack of freeform locomotion. It is easy to think that something innovative and groundbreaking will be well received, only to find out that the market thought the opposite, or even worse it is split into half of them supporting it, and the other half condemning it. The VR market is small, so developers try to please all VR gamers. No matter what genre you choose to work on as a developer, you need to act as if you are addressing everyone that has a VR headset, regardless of their personal genre preferences.

No sane developer would want to engage in VR. It is one of the reasons(probably the main reason)we don’t see any big companies investing in VR yet. At the same time, when an industry is at such an early and risky stage, it provides the opportunity for experimentation, for innovation. If everything was already set and defined, there wouldn’t be much room for exploration. We believe that VR can be the perfect platform for a genre like RPG, because of its power to take you to another world. We believe RPGs have always been about immersion. VR can give new, unseen levels of immersion. It won’t be easy, it will take a lot of trial and error, but we think that from this risky and potentially painful period, great things will come. We want to be contributing to great outcomes.

There’s not much precedent for large scale RPGs in VR, where small-scale environments seem to be the norm. Can you talk about your approach to developing the game? Does this question of scale pose any particular challenges?

It is challenging indeed! This is why we decided to start with an Early Access release. There is a lot of unknown territory and it is hard to know what works and what doesn’t unless you let users play the game. Being indie developers in such a risky venture requires funding as well. We have often seen commentary that is against Early Access titles and there are some valid points being made, but developers take huge risks, even more so as indies, and that holds especially true in VR. Technically any game being released for VR should be treated as an Early Access title since all developers are experimenting to find what works, what doesn’t, what differentiates one genre from another and so on.

For us, Early Access meant we can break down the full game into stages that are manageable, all the while allowing our players to communicate their feedback to us before we proceed to the next stage. Early Access allows us to gather much needed funds for the development, which will start increasing the scope of each subsequent update. We start with a more linear and limited approach, working towards a large-scale open world experience with each major update.

I can imagine firing off a spell with a gesture in VR is pretty wild. How does VR changes the way we interface with the standards of the RPG genre?

There are many standards to explore in VR, which we are accustomed to in traditional RPG gaming, yet don’t translate to VR. It takes a lot of trial and error and we need to maintain an open line of communication with our audiences. What might feel great to us might not translate well to the user experience, or the other way around. RPGs in general are challenging projects, even more so in VR, so it takes patience and persistence to get RPG elements right in VR. On the brighter side, it is more immersive, so it allows the player to actually roleplay and not just be an observer. VR allows us to take the player and literally transport them into a fictional world, whereas non-VR gaming has been more of a window to another world.

Characters also feel more alive in a VR environment. It is one thing having a large dragon breathing fire on the player on a flat screen, and it is a completely different experience standing in front of the same beast in VR. Everything feels more alive, more immersive. 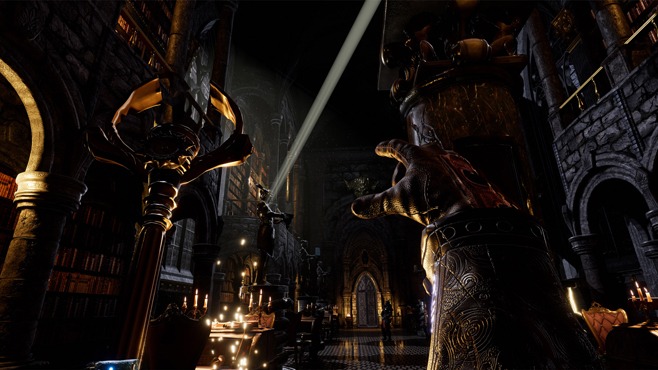 You play multiple characters over the course of the full game. Can you talk about them and how the shifting perspectives effects the story? How does the idea of multiple characters square against the long time RPG mechanic that calls for a long time invested in a character as they gradually progress in power?

Multiple playable characters bring a breath of fresh air into a long reused (even if effective) formula. Playing through multiple characters not only offers a variety of gameplay mechanics, but allows players to see the world from different perspectives, hence be more emotionally invested and connected to the entire fictional world rather than just one character.

Of course, for those wishing to fully invest in one character, we will ensure that there is plenty of content for each playable character to offer a full experience should a player decide to play with no other characters. Still, we want the incentives that encourage players to try out different game styles and different viewpoints, to be there.

How does Unreal Engine help in developing a game like SoulKeeper? Are there any unexpected benefits or challenges?

We have used each and every version of the Unreal Engine since Unreal Engine 1 (Unreal Tournament days). With every generation, Unreal Engine has been the most intuitive and fluent engine to work with, allowing us to achieve the best levels of quality not only visually but in all other aspects as well.

Obviously, with each new generation and with each new update, we see the engine growing stronger and more useful to us. Even when we think it has peaked, Epic surprises us and introduces new features that make our lives easier. The engine inspires us to create and to push the envelope. Perhaps most importantly, the engine is developed by people that want to fully support it. That counts by far the most.

Revving the Engine: All Walls Must Fall