Date Warp is the visual novel you give your little sister to get her invested in VNs.

Date Warp was one of the first visual novels I found on Steam when they began using the “visual novel” tag, and it made its way into my library shortly thereafter. Unfortunately so did a number of other VNs, resulting in Date Warp falling to the bottom of my queue as VNs with better art or a more interesting premise came into my possession. I finally decided to give it a try this week, with some confusing results.

Date Warp is a lot like the $6 bottle of wine from Rite Aid that I drank while playing, in the sense that I knew exactly what I was getting when I saw the name and price on the tin, I found the product perfectly serviceable (though unremarkable) for what I wanted, and it left a decidedly weird taste in my mouth once I was all finished. Date Warp follows the story of Janet, a young Indian woman who has gone out on a subpar date with a football player named Bradley at the start of our tale. After their date their car breaks down, resulting in the pair seeking help at a mysterious mansion in the woods where they find four young men who are decidedly a bit off. The plan is to spend the night and then go for help, but Janet soon discovers that something has happened to make it impossible for anyone to leave the mansion. The story takes off from there.

The art and music of Date Warp are OK, but not particularly good. Most of the tracks sound like the generic kind of background music I’ve heard in dozens of VNs, but it wasn’t bad by any stretch of the imagination. It was peppy where it needed to be, sad when the writing called for it, etc etc. The art had the same problems I’ve seen in several other VNs, wherein the background artwork looks much better than the sprites, both in terms of artistic style and overall quality. The characters look a bit amateur, and while the shading and coloring was pretty good the proportions (especially someone’s head in relation to their body) were off. Going through the story, I couldn’t shake the feeling that these sprites were very reminiscent of anime characters that my friends used to draw back in high school, in the sense that they lacked a distinct style but were likely drawn by artists who could produce something amazing given a few more years of hard practice. An effort was at least made to give the sprites different facial expressions, but the transitions between these could be a bit rough at the best of times. As a minor nitpick, I also wished that Date Warp had bothered to mirror the sprites at times so it would look like the characters were actually talking to each other, instead of speaking to opposite sides of the screen. 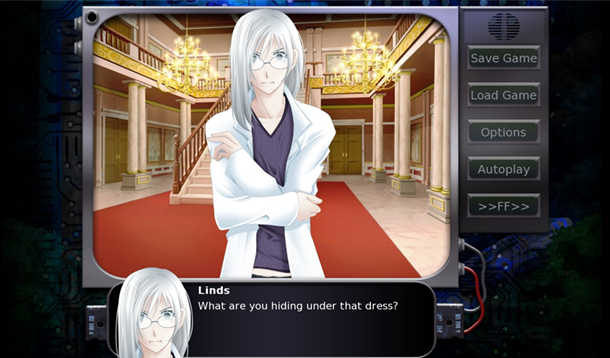 The story is what really perplexes me though. Some of the characters intrigue me, while others were as bland and lackluster as a glass of 2% milk. I quite enjoyed Linds, the perverted mad scientist, and Bradley’s motives were somewhat understandable even when his actions were questionable. But no matter which route you ended up going down, none of the stories felt very fleshed out. You’d get little tidbits of background to establish that all these guys had some kind of tragic past, but it’s never explored in any great depth. Janet occasionally tries to tie their hardships to her own struggles growing up, but it’s usually done via internal dialogue and doesn’t seem to add much to the plot. Given how simplistic and trivial the actual story routes are, it’s kind of surprising how weird the endings can be. Depending on what route you took, you might get back home, you might establish a new life for yourself in an alternate dimension, your soul could be sucked out, or something else entirely might befall Janet. In fact, the endings actually made me lament how plain the rest of the story was, because I never really got super invested in the game until after I’d played a few routes and wanted to know what other messed up endings I could get. I ended up trudging through the unseasoned meat of the story to get to a wonderful dessert of an ending (which paired quite nicely with a rosé, fyi).

At this point, I want to be clear that I don’t think Date Warp is a bad VN, particularly the kind of bad VN that you would deliberately go out of your way to purchase for being such a blemish to the genre as a whole. It doesn’t have the “so bad it’s good” qualities of VNs like Seduce Me the Otome or the flaming trainwreck qualities of something like Bionic Heart. Compared to those, it’s rather dull. But there was something about Date Warp that made me want to stick with it, and I think it’s due to nostalgia for the kind of reading and writing I used to enjoy. Tying back to my original comment at the start of the article, Date Warp felt like the kind of writing you might have found or published by young women on livejournal back in 2009. There is an attempt here to write about a fascinating sci-fi storyline imbued with romance and humor, but not necessarily the skill to execute it at the highest level. There are some truly delightful moments and twists in the story set alongside bits that a more mature writer would cringe at and shy away from in future works (such as naming the most religiously devoted character ‘Raphael’).

The single element that drives this theory the most for me is the main character. Although Janet is supposed to be a college freshman, a lot of her characteristics and mannerisms bear more of a resemblance to that high school sophomore you knew back in the day who spent all her time in the computer lab on DeviantArt or doodling in her notebook. Janet talks at length about how she was always a loner who never had any friends, focusing instead on pleasing her parents by working hard in school. She’s never had a boyfriend or been on a real date, and her attempts at flirting often come across as sweet but clumsy due to inexperience. She gets boys to respect her by standing up for herself, is willing and able to dive headfirst into any new challenge, and messes up quite often. To top it all off, the boys around her aren’t romance options so much as they are vehicles for Janet to come to several realizations about herself and what she wants out of life; best case scenario, the boys can come along for that ride. She’s the embodiment of what an inexperienced 14-year-old would think college kids and romance should be like.

I once heard that artists (including writers) all have about a hundred bad pieces in them that they have to get out of their system before they can produce truly good works. Date Warp feels like work number #58 or #59 in that metaphor. This VN has good bones and more than a few cute moments that made me giggle or roll my eyes, but it’s not high art and definitely wouldn’t find itself on my top ten VN list. Date Warp is the kind of VN you show to a younger reader who’s heard about visual novels as a genre but doesn’t want to get into anything too extreme just yet. I’ve heard people suggest that Katawa Shoujo is a good starter VN, but I think they forget exactly how long that VN is, never mind how many sex scenes are in it (even if you can turn them off). With Date Warp, on the other hand, you can complete your first route in less than an hour and spend much less time on subsequent playthroughs to get the additional endings by fast-forwarding over a lot of the dialogue. None of the characters are extremely offensive, there are no raunchy scenes, and there’s enough story and plot to keep younger readers interested. Date Warp is the kiddie pool you can splash around in to determine whether or not you like swimming before graduating to bigger and better things. My only real complaint was the fact that the game definitely fast-forwarded through unread dialogue (this appears to be a theme in my reading over the past few weeks) and to get to your options when you have a choice, you have to play a puzzle game that cannot be skipped until you solve it at least once. If you can suffer through those, the rest of the game is perfectly functional and works just like any other VN out there.

Date Warp is available on Steam for $10, but I know it’s gone on sale before for at least 50% off. If you’ve ever played a VN before, I probably wouldn’t recommend it because it will likely feel lackluster compared to other works that you’ve read. However, if you happen to know a teenager who likes mystery and romance but doesn’t know how to feel about visual novels (if she even knows what visual novels are) this would be a nice present for them.

The Game Take is the Worst Take