This column is a reprint from Unwinnable Monthly #94. If you like what you see, grab the magazine for less than ten dollars, or subscribe and get all future magazines for half price.

Growing up in a small Kansas town, before the Blockbuster moved in, all the game and movie rentals happened through our small family-owned grocery store. There were three aisles, none wider than an Ikea bookshelf, flanked by the full-length aisle just for feminine hygiene products. The store would get movie posters sent to them by a distributor, but on account of the Christian nature of the owners, very few of these were ever hung. If there had been a single employee dedicated to this section, maybe someone would have fought that. There wasn’t. Employees from other departments made up their own rules. One kid (the spitting image of the acne-riddled teen from The Simpsons) would just hand me posters he knew would never see the light of day. These would decorate my room and become my de facto favorite movies, especially the ones that my parents wouldn’t let me watch. Sure, maybe Strange Days isn’t the best movie, but I never had to see it so I sure could worship it.

But then I got stuck.

One Friday, after school, I rented an NES title called Spelunker. We brought it back on Sunday when it was due. The next Friday I rented it again. And the Friday after. And so on. My parents, and even the employees, asked if I just wanted to buy it. I refused, because I was sure that the game wasn’t fun, but I needed to keep coming back to it. I knew I didn’t want it in my house, but it was impossible to get it out of my life.

This was my great childhood gaming challenge. 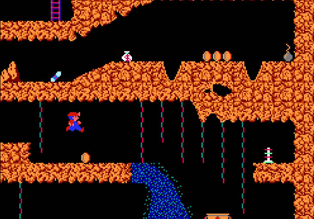 Spelunker is a game about a guy going down into a mine. He shouldn’t. He really shouldn’t. He is the most fragile human being who ever existed. Name a thing; that thing will instantly kill Spelunker Guy. Jumping? Yes. (Not falling, jumping.) Stubbing his toe on a rock? Dead. Getting pooped on by a bat? Done for. Standing still? Absolutely dead. The survival aspect of this survival horror is hilariously over-the-top.

Mr. Spelunk has to find color-coded keys and treasures that allow him to journey deeper into this cavern. Spelunker was one of the first videogames to do side scrolling but in a vertical thrust and the somewhat gigantic world of the game is everything that it should be: mysterious, packed with tiny details, traps and rewards. There’s a sense of adventure that propels you forward, even in this bit-art 1984 game. Part of that mystery is that there is no way to explain what is going on here. Even as a kid, it was the only game at the store that didn’t have an instruction manual. Why are there puzzles that seem to demand I interact with them that kill me for touching them? Why am I constantly running out of air and how do I refill it? Why is there a ghost that suddenly appears at random times and moves directly towards me? Why is the only way to kill him by shooting him with a gun (that can’t hurt anything else) that apparently shoots my precious life-giving oxygen? Why can’t I move after shooting my ghost gun? Why do ghosts hate oxygen and then explode? Why are there bursts of steam in the caves that kill me when I need that air for shooting ghosts? Why are there internet rumors that this was developed as a Mario game? What’s wrong with nearly every element of this including the digital screams of digital bats?

Spelunker became one of my few videogame journeys. It took nearly a year to beat the game. Playing it now, I’m so bad at it I realize I would need to sink another year of memorizing every jump to pull it off again. Dark Souls has nothing on Spelunker’s perma-death and difficulty level. A hilariously brutal deathtrap, this is the last and greatest of those games built to suck arcade quarters being ported to home consoles. Unfortunately, in an arcade I would’ve spent much less money in total to plow my way through Spelunker’s demonic pitfalls.

The caverns of the game eventually hit the pyramid of an ancient civilization, and then you must find the keys hidden on levels beneath it and backtrack to open the path to the endgame. For such a linear game, this threw me as a kid. “I’m at the end? But where’s the end? Did they forget to program the end?” But the seamless connectivity of the levels creates a big living world and opens us up a very early Metroidvania type of puzzle. 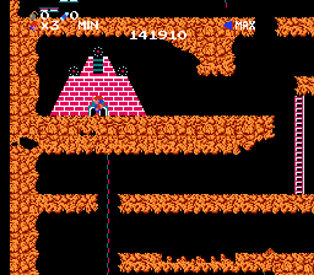 Oh god, is it as scary now as it was then, though. While not intentionally horror as anything more scarier than, say the alligators in Pitfall, the mix of a world where everything is designed to kill you while you slowly suffocate and a ghost that can appear at any time and force you to kill yourself while fighting it . . . it is the kind of experience that you cannot engage in without screaming “NO!” out loud, repeatedly.

To my great confusion, Spelunker has found new life in recent years with the spiritual successor Spelunky. The quirky indie title at least gives your Cave Man a few hit points of health and offers continue points at the start of new worlds. And Spelunker itself has been given new life by Nintendo in a new multiplayer-based (why?) iteration for the Switch. The opening frame of the trailer shows your character falling a few pixels and dying, so apparently this kind of pain is now in vogue. I never understood this new wave of Souls-like games that punish you for even trying, but as a six year old who couldn’t stop renting Spelunker, maybe I always have? Maybe just instead of skeleton kings I need deadly bat guano.