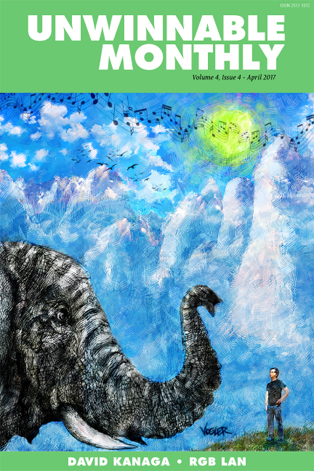 This column is a reprint from Unwinnable Monthly #90. If you like what you see, grab the magazine for less than ten dollars, or subscribe and get all future magazines for half price.

Pop culture’s favorite Poltergeist is probably the pissed-off relocated corpses, buried under the house in Poltergeist, who steal a little girl and refuse to let the family do laundry for several weeks. The easy runner-up in this category is Michael Keaton’s character Beetlejuice, whose name I shan’t repeat. I often forget about his polter-power, since he’s present in so much of his ghostly activity instead of playing it from behind the spectral curtain. That film came out in 1988 and, despite showing the unlimited power-set of the recently deceased, very few games have tried to cast you as a ghostly apparition seeking revenge on the living via cheap scares.

That’s why I’m shocked that Haunting: Starring Polterguy isn’t the hidden gem for everyone else that it’s always been for me.

Released in 1993 for the Sega Genesis, this Electronic Arts game features a teenage dude – and I do mean dude in the most Bart Simpson sense – who buys a skateboard made from cheap parts that results in his death. The man behind that skateboard company is the evil Vito Sardini, who I’m sure the Italian Defamation League would have a field day with in 2017. Vito Sardini is IN NO WAY A MOBSTER but he does own a moving truck company with only his smirking cigar-biting face on the side of the trucks. Him, his wife and two children have just moved into an elegant two story mansion, but things are about to go poorly for them.

See, this teenage skateboarder who fell down and died has been brought back to this realm as Polterguy. Polterguy. Just a guy, who polters. You’re a floating green apparition who horrifyingly still has a bit of normal flesh skin tone around the nose and mouth, and you are going to punish this family for their evil ways . . . or at least the evil ways of their patriarch? We’ll just assume that the kids are in on it, too? Sure. 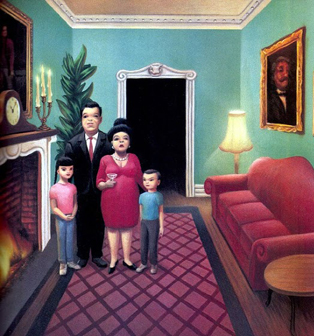 After watching the Sardinis move into their first home, we’re treated to a quick explainer from Polterguy himself, via the scrolling text at the bottom of the screen. We’re in the home with Mrs. Sardini, in an isometric view of one of the rooms. Polterguy, decked out in punk leather trappings, can’t be seen by the living, which he demonstrates by circling the mom several times, but what he can do, and loves to do, is polter. Polter hard.

In each room of the house where a family member is mulling about, Polterguy can dive into personal belongings and then jump out of them. While inside, he sets them as traps, which begin to shake – attracting the attention of the living. When a person gets too close, the trap springs and scares them, causing them to drop ectoplasm “fear energy” which is the source of Polterguy’s ability to stay on the plane of the living. Once you scare a family member enough, they’ll run screaming from the house. Once you scare all four family members from the house, you’ve won. They move to a bigger house (bringing all their haunted furniture with them, like idiots) and that’s your next level.

I also cannot stop typing Poltryguy and I’m sure that’s worthy of being its own game.

What truly sets Polterguy apart from anything else in 1993 and certainly almost anything I’ve seen since, is the system of scares he uses on the Sardini family. In the introductory room alone, here is a list of items and what happens when Mrs. Sardini gets too close:

A bed turns into a giant mouth with eyes and attempts to eat her.

A poster of a movie called Ninja comes to life and a samurai sword almost falls on her.

A closet door opens and a giant red hand reaches out.

A small rocket launches out of a globe, circles the planet, then crashes into the globe causing blue goo to shoot everywhere.

This sets a weird precedent for the style of scares you’re in for throughout Haunting. Giant scary mouth bed: Spooky! A globe with its own space program: Weird!? Ninja poster comes to life: Odd? Monster arm: Spooky! 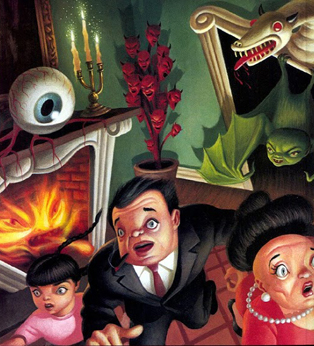 It’s all over the place, and none of the animations repeat across levels, making the hundreds of opportunities for scares a total delight. Playing as a kid, there was also something shocking about the level of gore. Lots of things that would otherwise be silly transformed at the last moment into something truly phantasmagoric. For example, plenty of spooky traps do not require you to wait for the living to interact with your shaky furniture. Green “spook ‘em” traps allow you to truly poltergeist an object, like taking control of a chainsaw and causing it to fly around the room, chasing Vito or his offspring. In the first level, you can take control of a pair of pants and run around the garage with them. It’s pretty cute to watch Vito scream at the sisterhood’s literal traveling pants. Then the pants fall down at the end of your run, revealing that there were human legs in them and blood pools out onto the ground.

It’s a level of violence that young me would never have seen rendered in such hilarious, gory detail in a Nintendo product, but oh boy was Sega willing to let this fly.

It’s not all fun and games for the undead. Polterguy has a very limited bar of ectoplasmic energy. Each trap set uses up some of this ecto and especially the big spectacle scares can drain you fast. Add to this the fact that the family moves through the house in unpredictable ways and sometimes you wind up booby-trapping an entire room, only to watch Flo (the wife) wander away before partaking in any of your violent delights.
I was about to chase her with a vacuum cleaner that became a bleeding face and then she just saunters away? Unacceptable. I feel like I’m not appreciated in this relationship.

What happens when Polterguy loses his ecto? You’re instantly transported to The Underworld: a place full of coffins, haunted creatures, bats and just enough ecto for you to resurrect yourself back to the world of the living to inflict more fear on this family of dicks. I wouldn’t see a design mechanic like this again until Xbox 360’s Prey in 2006, where your Native American character recovers from death by journeying to a spirit world and shooting arrows at the ghosts of birds. That . . . actually doesn’t sound great when you spell it out. Anyway, Polterguy is less problematic. He just need to get back to the realm of the living to permanently fuck up some children for the sins of their father’s skateboard manufacturing division. It’s . . . pretty punk rock? 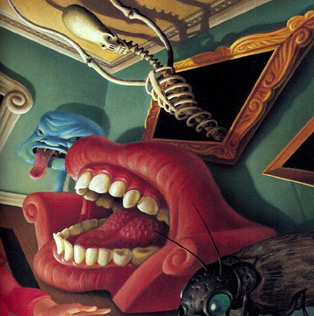 Time begins to suck your ecto away quickly, as does the barking of the family’s pet Chihuahua, who can see you. Also, with no explanation for where they come from, floating skeleton heads start appearing at random, eating the ecto you’ve earned by scaring the Sardinis. Since it’s hard to hit a game over in Haunting, the difficulty progression here is based around how much time you have to spend navigating the increasingly deadly dungeon of The Underworld. By the time you hit the fourth and final Sardini home, you’ll be splitting your time between the two realms almost equally.

What happens next was one of my biggest surprises in childhood gaming.

At the end of the fourth mansion, I scared off the family and was prepared to find my reward for being so good at poltering. Instead, a room opens and inside, the family Chihuahua barks at you. Then it explodes into an Akira-style flesh monster that shoots fireballs that hunt you while screaming skeleton heads circle you. Yup, didn’t see that coming. Suddenly, your Polterguy has the ability to do flying roundhouse kicks and throw exploding blood at the monsters; gameplay elements that were nowhere to be found before this moment. In an isometric game where you float awkwardly and have no ability to control throw distance or directionality, it makes for one hell of a final boss fight? Once you defeat the flesh monster, it becomes a series of self-replicating brain monsters that are also spider robots.

If you can manage to defeat the brains, even with multiple trips to the Underworld mid-boss fight, you are treated to perhaps the best finale in a videogame. Ever. Polterguy is turned back into a human boy and is IMMEDIATELY crushed by a giant anvil that says “Sardini Industries” on the side. To recap: the Sardinis built a haunted torture room for their flesh monster dog and booby-trapped it with a person-sized anvil which is one of their many side-businesses alongside moving trucks and murder skateboards.

Polterguy takes it all in stride though, reminding us of what a good time we had giving it to those Sardini folks for “dissing” him. Dude, you got murdered. I want to be so chill that I refer to my own murder as “dissing” holy god why.

Haunting: Starring Polterguy is set up for the sequel that never happened, and that’s a damn shame because it achieved a rare mix of comedy and horror that should have made it videogames’ answer to Evil Dead 2 instead of getting forgotten in the 16-bit dust-bin of history.